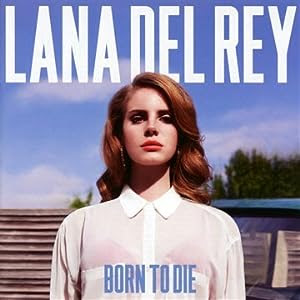 We know it's not her real name. We know she almost certainly had lip implants, despite her public denials (and seriously, what kind of Brazil-like future is this year of 2012 when this is even an option?).

As someone who genuinely loves black metal and torch singers like Billie Holiday (about whom I've written many times on my own site), and jazz in general, LDR is genuinely fascinating: her apparent birth name, Lizzy Grant, it seems, didn't yield the economic results she wanted, and so she changed it.

I can't argue with or criticize her for this, as my own resume/CV has underdone several changes (none overtly deceptive, but more... cosmetic) to fit into an obsessively image-conscious recession-based American society. (And the line "Money is the anthem of success" from "National Anthem" almost explicitly addresses this.)

The bottom line, to me, as a listener, is: is Lana del Rey worth listening to...? And this, repeatedly?

Lyrical-theme-wise? Almost always the same one--

she loves the bad boys and they don't appreciate her because they're insensitive dicks: the textbook world view of the previously-abused/the low self-esteem-having, i.e.,  "I seek out men who are overtly failures, that way I always have something to complain about, and I always look like the victim here --even though I've unconsciously elicited this response-- because that's my entire experience of men and I don' t know or believe that I can expect something better."

All these tunes deal with a rich girl who was looking, desperately, for Something Else. You know-- the same theme Billie Holiday loved like heroin.

Sorry. The shrink in me took over for a minute.

Though this diagnosis is still true....

This blend of the bitter and the sweet is truly great. Witness these lyrics from "Radio":

The blend of the profane and the traditionally-harmless ("sweet... cinnamon" and "fucking") pretty much defines del Rey, and in my mind makes her genuinely interesting to hear (musically) and evaluate (lyrically).

"Carmen," with a nicely poetic/succinct line in and of itself:

...Doesn't have a problem lying to herself, 'cause her liquor's top shelf...

"Million Dollar Man," gets wicked close to over-doing it, over-playing the maudlin sentiment, but is still pretty good, just not as good as the rest....

It's like the Hamptons version of Tori Amos, particularly Amos' "Precious Things" from Little Earthquakes-- here, a rich girl's experience with other girls.

By "Summertime Sadness," this shtick has slowly become more obviously intentional, but is still 20x more powerful than 99% of most pop stars....

You're bitter about your men.

Unfortunately, if we're listening to you at all, one with a brain can't help but notice that you seem to seek out the same sort of man/situation you love to complain about....

As I was listening to this over the first snow storm of 2012:

With the lyric, "You like your girls insane," I'm reminded of an epic soundtrack for the nuclear winter end of the world: regret, with some humor about a black fate....

Lana del Rey, the Beautiful borderline personality-disordered Charles Bukowski, even down to the "off to the races" (Hank loved the races, you see)-- here you barely notice the sleaze... this "gangster Nancy Sinatra" (her initial ad copy, I forget from where) is so right.

So what? That's me in person, for fuck's sake.

So now, forget the lyrics.

Purely musically? I.e., if you didn't speak English, what would you think...?

From someone who listens to literally dozens of albums a week:

This is good stuff.

I really like her. She's worth hearing. And this, repeatedly.