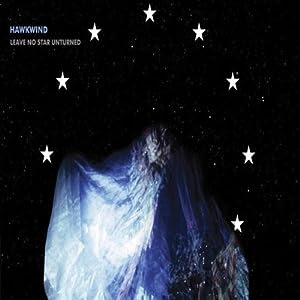 Easy Action Records in the UK have released some pretty incredible live recordings of The Stooges, Iggy Pop, MC5 and Sonic's Rendezvous Band the past few years and now they bring us this monumental live Hawkwind document. Leave No Star Unturned captures them in January 1972 headlining a show that also featured performances by the Pink Fairies and Syd Barrett at a venue called the Cambridge Corn Exchange. Pretty cool line up. I can only imagine how fried everyone was but their lids must have really flipped once Hawkwind blasted into their intro song "Technicians Of Spaceship Earth." A minute of space rants and noise before launching into a powerful, 12 minute version of "You Shouldn't Do That" (3 minutes shorter than the studio version).

In 72 Hawkwind had one of their best line ups with Captain Dave Brock (guitar, vocals) leading the charge with Nik Turner (sax, vocals), Lemmy (bass, vocals), Terry Ollis (drums), Robert Calvert (lyrics, insanity) and the keyboard/noise generating duo of Dik-Mik and Del Dettmar. Later in the year Terry Ollis would be replaced by Simon King and that line up would record the classic Space Ritual album in December. Leave No Star Unturned finds them in very good form but they have not yet achieved the ignition they would have on the nights the recorded Space Ritual. Still, live Hawkwind from the classic era is always a good thing, especially since the set lists are pretty different. Only 4 songs are repeated on both albums - "Born To Go," "Earth Calling," "Master Of The Universe" and "Welcome To The Future." The basic framework of the songs are similar but Hawkwind were never afraid to experiment night after night. The version of "Silver Machine" from this show with Robert Calvert singing was later overdubbed with Lemmy's voice and turned out to be a big hit single for them. The version they released was definitely an improvement but it's still cool to hear it the way it went down on this night.

"The Awakening" is a tripped out 2 minute instrumental bridge setting up a very tripped out "You Know You're Only Dreaming." Those songs would definitely make you feel warm and fuzzy if you're dosed but "Paranoia" would totally freak you out. The studio version on their first album is pretty nuts but this one makes that one seem tame. Lemmy really hammers away at a repetitive bass line while the band creates all sorts of swirly chaos around him. Listening to this really loud when sober might make your stomach a little queasy. Just think of the poor hippies getting bombarded with this noise and a bunch of strobe lights pointed right at them! Genesis never did this.

The limited edition version of the CD comes in some very cool packaging, about the size of a DVD box. There's a booklet with rare photos, including a couple nudies of dancer Stacia, and informative liner notes. If you're new to Hawkwind, Space Ritual remains the definitive document but more experienced travelers will want to embark on this trip pronto.