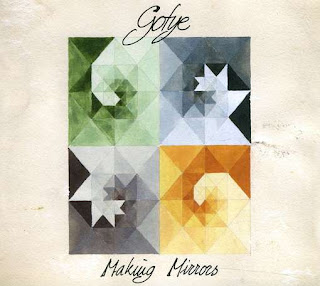 Unlike movies, it’s possible to make a solid or even a great third album. As a matter of fact, several of my all time favorite albums happen to be the third record in certain artists’ discography like Bruce Springsteen Born to Run, Green Day Dookie (the third studio album), Def Leppard Pyromania, The Ramones Rocket to Russia, The Clash London Calling and Iggy and the Stooges Raw Power. After careful thinking, I realized my favorite album for several artists in their entire catalog turned out to be their “third” album and included Metallica Master of Puppets, Radiohead OK Computer, Arcade Fire The Suburbs and The Smiths The Queen is Dead.

Before I even started composing this review I brainstormed what would work as the perfect label to call a third album, but to no avail. Even my extensive research proved inconclusive. As you can imagine, labeling albums beyond “debut” and “sophomore” became frustrating.  The possible vocabulary to describe subsequent albums proved preposterous. Personally, I wish there was an accurate term to describe a tremendous third album.

This is the case with Gotye’s latest release, Making Mirrors. Gotye has released two previous indie rock albums Boardface and Like Drawing Blood and is one-third of indie-pop band The Basics. For almost the past decade, this award winning singer-songwriter has been a force to reckon with and there are no signs of him wearing down. Gotye is here to stay.

An ingenious introspective album, Making Mirrors marks the beginning to a great new year. When the album initially came out late last year, Making Mirrors was only available as an import. When it comes to music, the word import is both my best friend and worst enemy. I prefer physically purchasing an item specifically made for my own region rather than owning an “overpriced album” just so I could possess an album earlier than everyone else. Now you know why I delayed writing this review.

In recent years, it seems the first track for certain albums, particularly for indie and alternative artists, will have “opening tracks” that act as a precursor and intro to the actual album like “Swords” off Zola Jesus’ Conatus. However, some mainstream artists use this gimmick of an “opening track” as a fun warm up like LMFAO “Rock the Beat II” off Sorry For Party Rocking. In either case I think it’s a great way to ignite interest in your fans and the anticipation is awesome. The titular track “Making Mirrors” is one such song. It’s a nice mellow tune easing you into the first great album of 2012.

The musical genius Gotye unleashes the unique “Easy Way Out” as his second track and it sounds like an acid infused, psychedelic-like version of The Beatles “Day Tripper.” For two minutes, this song will hook you immediately and just as quickly the tune abruptly ends without reaching a climax. Don’t make this song a “distant memory” because the album is just starting.

The lead single and third track featured on Making Mirrors is the critically acclaimed and extremely popular “Somebody That I Used to Know.” Maybe I’m a sucker with songs about bad breakups and relationships, but this song is catchy on so many levels it’s not even funny.  “Somebody That I Used to Know” is the first Gotye song to chart in the United States. As of this review, it’s steadily moving up the charts and is currently a Top 40 hit on the Billboard Hot 100.

“Somebody That I Used to Know” starts off with Gotye singing as someone reminiscing about his past flame in a caring and reflective  manner, but bursts through as a classic 80s pop song as though it were Sting during his days with The Police. One can even argue Gotye sounds like Phil Collins when he was the lead singer of Genesis once the chorus starts.

“But you didn’t have to cut me off
Make out like it never happened
And that we were nothing
And I don’t even need your love
But you treat me like a stranger
And that feels so rough.”

Kimbra’s collaboration on “Somebody That I Used to Know” enhances each single syllable she utters and makes me remember all my past relationships. This New Zealand vocalist oozes the emotional rollercoaster side of relationships and takes this song to a whole new level. Kimbra is another artist worth discovering if you don’t already know her.

Gotye once again sounds like Sting on “Eyes Wide Open” and his luminous lyrics “So this is the end of the story/ Everything we had, everything we did…” are remarkable throughout the song. Somehow Gotye utilizes the best of the 80s pop scene by creating intelligent, inspiring tunes that transcends generations with its relevant adult themes such as hard breakups. As Wayne and Garth proclaimed to Alice Cooper in Wayne’s World, “I’m not worthy.”

Making Mirrors continues to stun listeners with its wide range of compelling compositions, but nothing seems too random.  The retro “I Feel Better” seems similar to Fitz and The Tantrums with its infectious soulful sound, while “In Your Light” has an acoustic guitar intro similar to George Michael’s “Faith.”  Other notable songs include “Bronte,” “Giving Me a Chance,” “State of the Art” and “Don't Worry, We'll Be Watching You” on this terrific 12 track album.

There are also additional tracks  available for individuals who pre-ordered the album on iTunes, including a remix of Gotye’s hit song “Somebody I Used to Know” by Faux Pas, "Dig Your Own Hole" and “Showdown Below My Sombrero" (only if you pre-ordered the CD/DVD version). Regardless of what version of the album you own or want to own, Making Mirrors exists as one of the Top 10 albums of 2012. Yes, I said it. Rest assured when it comes to compiling my “Best of List,” Making Mirrors will without a doubt be on that list.