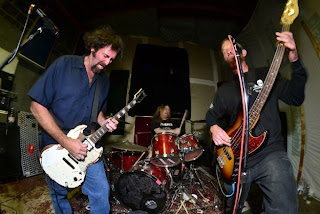 Man, I am stoked that this new Corrosion of Conformity album is so good! They were one of the first hardcore punk bands that I discovered on my own, thanks to the recommendation of Bob Muldowney in the pages of his Kick Ass fanzine in 1984. When Animosity came out a year later it was blasting on my stereo pretty much non-stop and I even interviewed drummer Reed Mullin for my high school newspaper. It was also one of the first "hardcore" tapes my friends who were into Ozzy/Dio/Priest/Scorps could tolerate. Well, at least most of it. Side two was a bit much for them but I loved it. So when it was announced that C.O.C.'s ever changing line up was reverting back to the Animosity trio of bassist/vocalist Mike Dean, guitarist Woody Weatherman and Mullin I was very excited. I missed their NY show on the first go round but heard they were great. When it was announced that they were going to do a new record I really didn't know what to expect. I think the last C.O.C. album I heard all the way through was Blind and that was about 20 years ago.

Album opener "Psychic Vampire" starts off with a heavy groove before switching up with a fast punk part before returning to the groove. A very nice Bad Brains via Mahvishnu Orchestra way to begin. "River Of Stone" and the instrumental "El Lamento de las Cabras" are slower and moodier and make a fast thrasher like "Leeches" sound even faster and heavier. "Leeches" (sung by Reed) is really the only song similar to their vintage thrash era. Unsurprisingly, "The Doom" is slow and heavy but has some fast parts, too. C.O.C. was heavily into the first 2 Trouble albums when they came out when at a time when most metal fans were not into them. I always thought it was funny how a hardcore band got a lot of metallers into bands like Trouble and Saint Vitus because they'd wear their t-shirts.

I hope this album finds an audience. I know a lot of their fans are skeptical because Pepper Keenan isn't in the band right now and they probably never liked early C.O.C. They lost many their original hardcore fans after the Technocracy EP and this album might not win them back if all they like is punk rock. Their loss is my gain, I guess. I got my ticket for the NYC show on March 1 and I can't wait to see these guys rage the stage again.

Right on Woody! Give us a report from their upcoming show too.