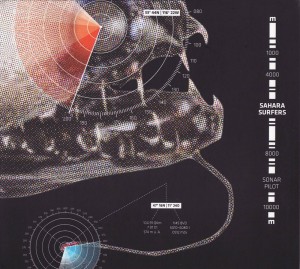 An emotional female voice layered over heavy rock music really does it for me. It always has. So I was feeling more than a little coolaphonic when I downloaded and listened to the latest offering from the Austrian stoner/psych band, Sahara Surfers. I got their debut full-length not long after that.

I'm so stoked I got Sonar Pilot, released late last year. It's hella swick (sweet + sick). I'd say the tunage is Kyuss and Fu Manchu-inspired and the vocals remind me of Drain STH (remember them?). A lot of the album can be kinda chillaxin', too.

The riffs on the opening instrumental, "Intro", take me out to the impact zone, where I catch a gnarly swell and rise up to feel the wind and sun on my face. I'm hanging-ten to the tasty grooves - cruisin' - and it's happy days again. I know this is gonna be mad, 'cause the waves are juicy and heavy, brah. I'm going deep.

"Underline" can be punishing, and I feel like I'm in the pocket, or the steepest and most powerful part of the wave, just hoping I don't get stuffed and rag-dolled. I still get pounded by some pumping sets, though. Am I still alive? You betcha, I'm no poser.

Sahara Surfers give a solid performance throughout this record, but I think "Mass Crashing" is another righteous tune with a killer stoner-rock knockout punch. Friggin' stellar.

The nice, solid nugg, "Fold Over", is a little more mellow during the first half, but later gives way to to plenty of fuzz. The riffs get hugangus (very, very big) and slammin'.

I really don't think I should have to go through each of the 9 songs to get my point across, but the title track and "Aenor" also stand out as mondo moments to me. I think they're a couple more spiffy fuzz/psych masterpieces. So tight.

Today, I've given a few more listens to Sonar Pilot and I'm full-on noodled. Right-on, dude and dudettes! This is a free, rad party wave we can all catch. Get some!

If you want to buy a physical copy, hit the Sound Zero link below. There you can also download a free digital copy of the Sahara Surfers' debut, Space Trip On A Paper Plane, if you don't already have it.