Orange Goblin - Eulogy for the Damned 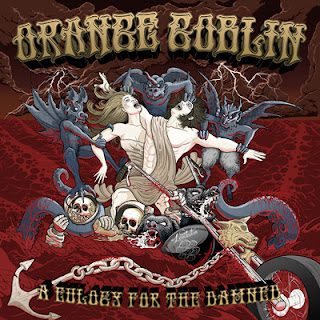 Can we say crank up the volume and get ready for some hard rock that will kick in your face so deep it will leave a foot print on your ear drums? If your ears have an appetite for gritty rock n' roll then Orange Goblin's seventh and new album Eulogy for the Damned, released on Candlelight Records is what you need to feed them.

Take the  sound of Sabbath, mix it with the biker, outlaw attitude and sound of Motorhead, pump the beast with the fury of punk, a bit of southern rock, and you've got a quartet from the UK called, Orange Goblin. Fronted by the growling vocals of Ben Ward, the band line up also consists of the gritty guitars of Joe Hoare, the heavy bass guitars of Martyn Millard, and the thumping and hard-hitting drums of Chris Turner.

With an album titled, Eulogy for the Damned, you better deliver a kick ass record. Orange Goblin more than delivers on the album title's promise. They light the package on fire and kick down your front door to give you a good rock n' roll ass kicking.

Eulogy for the Damned kicks into high gear like a semi-truck without brakes and rolling through early morning traffic with the song "Red Tide Rising". Listen to this song while your driving and you just may think you are that semi truck even if you're driving a Pinto.

The intro riff immediately gets your adrenaline pumping, and you just know you're going to be taken for a ride. Once those heavy drums kick in, you may not notice your head bobbing up and down while your lips curl into a sneer that says, "Here I come, so step aside, bitches!"

I do have to admit that I cheated. I looked at the track list on this album and my eyes immediately locked onto "The Filthy and the Few". With a song title like that, I had to just push play, and after listening to it, I had to adopt it as my personal theme song for 2012!

"The Filthy and the Few" is the absolute stand out track on Eulogy for the Damned for me. Perfect in every way. Talk about the perfect road song, the perfect song to play in a bar...not just a biker bar...any bar...a perfect song to get you in the mood to kick some ass. The songjust roars at you like a Harley, so don't be surprised if you do give your neck a workout while listening.

Heavy and pumping with punk-influenced fury, "The Filthy and the Few" has guitars and a bass that maintain an under-lining groove to the song that keeps it from entering Trash Metal territory. Wards growling vocals adds to the heaviness of the music in an unconventional way, and gives this song, as well as many others on the album, a nice, smearing of grit that gives Orange Goblin quite a unique sound.

Quick, fast, and to the point rock! If this song doesn't get your pulse pounding, you should check to see if you even have a pulse 'cause you just may be dead!

However, this album is not one dimensional. Orange Goblin switches gears with "Save Me From Myself", a bluesy, song very entrenched in a southern rock vibe, just with more gritty guitars. Ward's vocals tempers-down from a growl to a low, clean, fore-boding voice during the verses and goes into a great singing melody during mid-song. This is a great song with a great melody while keeping a sound gritty enough you can taste the sand between your teeth.

The albums second track, "Stand Up for Something", also is more of a mid-tempo rocker that has a nice rolling groove. Songs like "Stand Up for Something" and "Return To Mars" are straight up rockers that aim to groove you more than break your neck. These tracks add more depth to this album and keep the album's sound fresh so it doesn't get stale with just one particular style or sound. There's a lot of variety on this album, yet Orange Goblin somehow makes all the tunes fit well with each other.

From beginning to end, Eulogy for the Damned never gets stale, and it's full of surprises. Just when you think you may be getting more of something, Orange Goblin takes you on a different journey with each song. Like I said in the beginning of this review, they take you for a ride, and the ride is awesome the whole way through.

Eulogy for the Damned rocks with great songs that are written well both musically and lyrically. The playing is tight, and has an amazing in-the-pocket groove that many bands find hard to achieve.  The attitude is there and it's not pretentious. You can tell by their songs these guys live and breathe the rock n' roll and heavy metal way of life.

So on a scale of 5 stars, what does Orange Goblin's new album, Eulogy for the Damned, get?

I give it 6 stars, because it's just that damned good!

Boogs, I agree wholeheartedly with everything you just said. This...album...RAWKS! I'm only slightly upset that you reviewed this so quickly. Given a little more time I was going to start on a review of this myself. No need now however due to the fact that you've done such a good job with yours. Thumbs up!

Great Review! Cannot Wait To Pick It Up On Vinyl. Heavy Fuck.

This album is a solid gold killer start to finish...and we get to hear them play tracks from it for 8 nights straight in April!!!

Heya Penfold thanks...yeah, I kinda dug right into it when I first heard the opening song...some albums just draw you in and keep you there. Thanks for the comments, bro!


@ Sean - Thanks...I enjoyed writing this one and the album even more.

@ Ollie - Brutha...You guys get to play with them! Gonna be a hell of a rockin' kick ass show! Wish I could see that one!