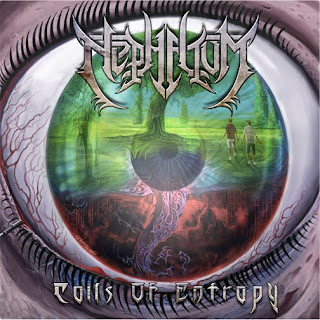 Nephelium is a phenomenal band. They seamlessly blend new techniques with tried-and-true methods of classic death metal. Being labled as "Metal juggarnauts" suits Nephelium, the way they combine classic death metal growls with punishing guitars, and unmerciful drumming. Their newest album, Coils of Entropy harks back to classic death metal bands such as their influencers Death, and Suffocation.

They're not just brutal, but slam your head against the wall fantastic. With vocals that often break down to animalistic roars and screeches, punching guitar riffs backed by some of the best double bass this side of terrifying, Nephelium's sound has justly been described as, "Brutal, sludgy, precise, dark, atmospheric, and surprisingly catchy".

The whole band delivers loud, fast, dark metal that with natural talent and precision that'll basically just blow your brains out. I was surprised at the amount of skill these guys have.  There's so many layers to the sound, with both guitarists holding their own as amazing, the drumming is just INSANE, and the vocals are rip-roaring magnificent. The new album sounds like spending a night in a creepy castle being chased by a murderer that's riding a werewolf. Paint quite a picture, don't I?

If you like really heavy, just brutally insane death metal, put down your computer, bookmark this page, and go get this album. Go ahead, I'll wait. ISN'T IT GREAT?! It is rip your face off and throw it across the room awesome.

With Coils of Entropy Nephelium created an album that's fresh to the ears, and didn't stop at nailing it, they drove it straight through.

Horn said…
That is badass... cool cover, cool name, and most importantly of all-- great guitar tone. They sound like an old-school/brutal death metal version of Meshuggah, like you said. Very cool stuff.
February 11, 2012 at 3:37 PM