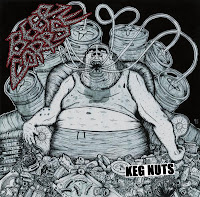 I know what you’re thinking.  You read that band name and thought ‘I’m one hundred percent positive these guys play ultra-melodic power ballads’.  Well I hate to break it to you waveriders, but Beer Corpse is actually a grindcore outfit.  I know?!  I was shocked too!  Thankfully I was able to quickly dismiss my melodious hopes and dreams and get down and dirty with this band’s glorious grind.

Here’s what little I know about Beer Corpse.  They are from Sydney, Australia.  It appears that the band is made up of five people (Mac: Chunders Phipps: Six Packs Olli:Yeesty Bottom End Brent: Beer Blasts).  Also…and I could be wrong on this point, but I believe they like beer.  What else have I learned?  That the ten songs offered up on Keg Nuts should only be listened to inside a safe, padded environment.  Involuntary flailing produced among listeners like myself can pose a serious health hazard to anyone unlucky enough to be in the vicinity, and I simply can’t have that on my conscience waveriders.

There are a couple of reasons why Beer Corpse stands out in my mind against other grindcore outfits I’ve become familiar with of late.  First of all the combined sound of the distorted guitar and bass strongly reminds me of The Misfits.  Secondly, unlike most other grindcore groups who only play at warp speed, this band regularly slow things down ever so slightly to establish a massive hardcore-like groove.  Third, the vocals take a back seat in the sonic mix to the instruments allowing me to completely focus in on the dirty riffs and aforementioned groove.  Thanks to the production anyone specifically listening for the vocals will never lose track of every guttural growl, but anyone not interested can simply pretend they’re not there.  In my opinion this will allow more people to enjoy these songs, and I’m all for that!

So, do you like grindcore music?  Do you like The Misfits?  Do you like music that will confuse your nervous system to the point where you cannot explain the movements of your arms and legs?  Seek out a copy of Beer Corpse’s Keg Nuts, put up some protective padding where you will listen to the music, and go nuts! 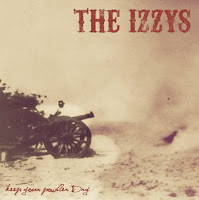 The Izzys -  Keep Your Powder Dry

Question.  Do you like your rock and roll with a healthy dose of country music?  On the flip side do you enjoy your country music when it incorporates some classic rock and roll elements?  You do?  That’s good to hear because I’ve just discovered a band that you must hear for yourselves named The Izzys.  Armed with their latest EP entitled Keep Your Powder Dry, they are ready and willing to rock your musical world!  Interested?  I thought so.  Let’s fill in some of the details, shall we?

The Izzys call Brooklyn, New York home.  The group is made up of four musicians (Mike Storey - Lead Vocals + Guitar; Jack Dawson - Guitar; Aaron Redlin - Electric Bass; Tim Kuhl- Drums + Percussion).  It turns out The Izzys have been making music for quite some time now unbeknownst to this sheltered reviewer.  Their first album was released back in 2003.  Since then they have released two more full lengths and three EPs or singles.  While I intend on exploring this rich vein of music in the future, let’s focus our attention on Keep Your Powder Dry right now.

When I am listening to this EP a couple of descriptors always come to mind.  Warm is one, and wholesome is the other.   While I don’t actually know how this music was recorded, I have to say that it sounds as if the task was accomplished with vintage equipment.  To put it mildly, it sounds fantastic!  I’m listening to this music digitally but honestly, if you put a blindfold on me, I might tell you I was listening to a vinyl record.  The music sounds like an old friend.  One you haven’t seen in a while but always welcomes you with open arms and good conversation.

Have I mentioned that each band member’s performance on this EP is terrific?  No?  Well I have now!  Each instrument works in perfect unison to create wonderfully memorable melodies that will instantly get stuck in your head.  The dual guitars harmoniously complement each other throughout and the rhythm section perfectly sets the stage for each song, no matter if we’re talking about an uptempo boogie number or a wistful ballad.  Mr. Storey’s vocals also help draw the listener in with an air of familiarity.  For the most part he sounds like a cross between Tom Petty and Bob Dylan, but in more delicate moments I hear a lot of John Lennon.  Bottom line, it all sounds good!

Waveriders, I strongly urge you to check out The Izzys.  If you’re a fan of old school rock and roll who enjoys their music with a strong southern twang, or if you’re a country music fan who enjoys songs with a little more pep to their step then this band will absolutely blow you away!  Now if you’ll excuse me, I need to find some money in order to buy those earlier releases.  Wait a second…you can download most of them (including Keep Your Powder Dry) for free on bandcamp?!?!  Oh my goodness!  Waveriders there is no excuse.  Get to listening right now!

--Penfold
Posted by The Ripple Effect at 8:13 AM