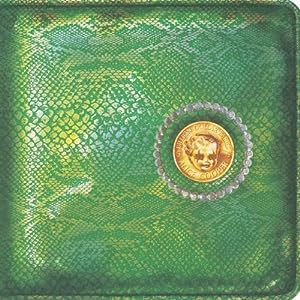 While out Christmas shopping for the family I decided to take a break from the nightmare of department stores to seek refuge in the local record shop. I needed to get something for my friend Vinny who lives just a few blocks away from me. A couple times a month he lets me come over and we pretend it's 1982 and take turns playing LP sides on his massive stereo. He also is nice enough to allow me to raid his liquor cabinet and refrigerator throughout the course of the evening so I wanted to get something to say thanks for indulging me. It only took a few minutes of flipping through the racks before I found the perfect gift - Rhino's reissue of the Alice Cooper classic Billion Dollar Babies. A favorite album for both of us, Rhino went all-out and recreated the amazing packaging of this blockbuster album. Not cheap, but totally worth it. I thought it was a brand new reissue but turns out it was released in December 2009. How did I miss this for the past two years?

Released in February, 1973 (just 7 or 8 months after the great School's Out album), Billion Dollar Babies came out the same year as other kick ass records like Raw Power, Tres Hombres, Razamanaz, Houses Of The Holy and Sabbath Bloody Sabbath. An obscure album titled Dark Side Of The Moon also came out that year. School's Out and rigorous touring made the Alice Cooper band one of the biggest in the world but Billion Dollar Babies made them even bigger. The band, along with producer extrodinaire Bob Ezrin, took everything to the next level. The songwriting, arrangements, musicianship and production are all top notch. People talk about the incredible production on Dark Side Of The Moon but Billion Dollar Babies is right up there with it. Play this loud and really listen to the music and you will be amazed. How did this obnoxious, offensive, theatrical garage rock band get so good? The borrowed a lot from their mentors Frank Zappa and Jim Morrison but added Groucho Marx and pure Hollywood showbiz to create this bizarre yet completely mainstream entertainment. And with no dirty words!

School's Out came in an elaborate school desk gatefold sleeve with the actual LP sitting in a pair of paper panties. But the Billion Dollar Babies packaging makes that seem like kids stuff. This is the real reason to pick this Rhino version up. No detail has been left out. The embossed raised lettering on the front cover lets you know this is a classy package. Open up the gatefold sleeve and the huge billion dollar bill has been recreated in all it's glory. So has the glossy band photos that are perforated on the left side of the inner sleeve. If you pop them all out the album credits are printed underneath. Then there's the inner sleeve with lyrics on one side and the classic photo of the band surrounded by bunny rabbits and stacks of money while Alice holds a screaming baby with his trademark eye makeup. Back when people bought records and actually listened to them, artists spent a lot of time on packaging because they knew their audience loved looking at and owning all this stuff. So fucking cool!

And do we even need to discuss the music? Alice is well known for his amazing live shows but the music has always been the best part. Killer is my personal favorite but Billion Dollar Babies is the best album these guys made. You can't argue with massive hits like "Elected" and "No More Mr. Nice Guy." Imagine my delight when I caught my mother (who HATED Alice Cooper) humming along to "No More Mr. Nice Guy" on AM radio. When I told her who it was she turned it off. Opening track "Hello Hooray" is an epic that they originally heard on a Judy Collins album! And the title track is nothing short of incredible. Neal Smith's classic drum intro starts off this creepy classic that features a cameo from none other than Donovan. Other guest vocalists on the album supposedly include John Lennon and Harry Nilsson buried somewhere in there. Everyone was so drunk back then that anything is possible. It's obvious that Kiss was taking notes. Their first album was released a year later and included a mix of hard rock and showmanship and they would later work with Bob Ezrin. Alice always had big, catchy songs but was never afraid to get weird at the end of side two. Kiss never did songs like "Sick Things," "Mary Ann" and "I Love The Dead." As a little kid these songs terrified me but I still loved listening to them. As an adult they still strike me as the work of twised minds making music for other twised minds.

I really love this record. As soon as my Christmas credit card bill is paid off I need to get a copy of my own. My original LP cover is totally destroyed and the vinyl is barely playable. The deluxe 2CD version that came out in 2001 is also mandatory but is now out of print! The remastering sounds great and the live show from the 1973 tour is excellent. The packaging is good but nowhere near as iconic as the original LP. I'm writing this on Christmas eve and am looking forward to watching the live DVD from the Billion Dollar Babies tour later tonight. Fuck the yule log, ALICE COOPER RULES!!

Alice Cooper Elected
- Watch more Music Videos at Vodpod.
Posted by The Ripple Effect at 12:05 AM