Ripple Music Celebrates a Rockin' 2011 with End of the Year Sale! 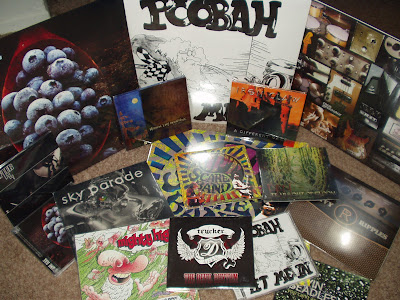 What a year it's been!

Following the debut Ripple releases of 2010, which found Ripple Music topping several Year-End "Best of Lists," Ripple returned in 2011 determined to build upon the love music fans have shown for authentic, guitar-driven rock 'n roll. And to say 2011 was an exciting year would be an understatement!

Following the release of the Stone Axe debut album with bonus live material, and a companion DVD, Ripple released more Stone Axe via the Heavy Ripples compilation double 7”, with Mighty High, Grifter, and Sun Gods In Exile. And speaking of Grifter, their Ripple debut album is already finding it's way onto several year-end "Best of" lists. Ripple then followed that with the deluxe 10 year anniversary re-issue edition of the long-out-of print first Mos Generator album with a killer vinyl, CD, and digital download package that has been flying off the shelves!

But perhaps the biggest surprise of the year, was the overwhelming response to the Ripple release of Scotland’s Iron Claw, and their first recorded material in 40 years, A Different Game. Metal Odyssey has hailed this release as the "Comeback Album of the Year!" and the band as one of the greatest rock n roll comeback stories of all time!

To celebrate all this music nirvana, Ripple Music will help get the music into the listener's hands with a special, Year-end sale at the Ripple Store. All Ripple releases will be 20% starting December 16th and running into the new year, ending on January 2nd. That's 20% off all releases! All vinyl, 7", CD's and even the special "packages" like the ultimate Stone Axe package (debut vinyl, Collector's edition CD/DVD, and Stone Axe/Mighty High split).

It's just Ripple's way of saying thank you to its loyal customers, the waveriders, and a way to spread the music around as Ripple prepares for an even bigger 2012!

RIPPLE MUSIC STORE
Posted by The Ripple Effect at 12:18 PM