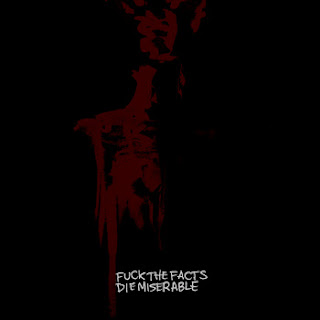 I was initially put off by the band's name-- profanity in a name usually means someone's trying too hard and can't deliver on the implicit promise of awesomeness, like Hellyeah or The Fucking Wrath.

Die Miserable is a surprisingly, despite its nomenclature, life-affirming album of progressive/ "experimental" grindcore. Ottowa's Fuck the Facts have released a Hades of a record....

This is Fun House Mirror metal--

It's freeing, this music, full of potential, like anything can happen-- a sax solo wouldn't seem incongruous.

For extreme music, it's memorable, very nearly catchy in spots-- these are (mostly) distinct, discrete songs, not just a wall of noise (which is fine sometimes, too, just sayin')....

"Lifeless" comes off like a thrashy Ministry-- it lurches forward nimbly like an Audi 18-wheeler that can also stop on a dime, "Census Blank" has an industrial-strength stoner intro, then gets Isis-ish and at 5:00 drops into a great jangly riff.

And it never sounds like they're trying to "Kitchen Sink" the whole thing, just throwing shit in everywhere-- it sounds like the same car that's just switching gears.

"Alone" is maudlin and melodic, gets grindy then proggy then proggy and Candlemassy at the same time, while "A Coward's Existence" grinds in non-Euclidian keys and at 2:15 delivers a beautiful morneful melody....

Closer "95" is fast as fuck , as much Extreme Noise Terror as grind. At 2:00 a haunting instrumental melody emerges to comp behind the solo.

In Die Miserable there's a furious drive on display  to connect to and manifest sheer creativity that pretty much makes comparisons useless. What's left to say? It's furious, it goes where it wants when it wants--

It's Picasso as a serial killer-- the musical.