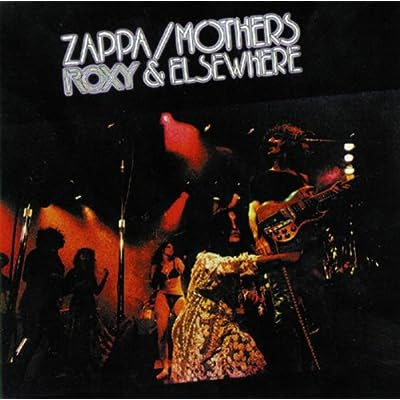 Writing about the first album I ever bought with my own money (Zappa/Beefheart's Bongo Fury) set off a huge Frank Zappa LP listening frenzy that is still on-going. And the one that's been getting daily spins is Roxy & Elsewhere, a (surprise, surprise) double live album from 1974. In Zappa's huge and diverse discography, this is often mentioned as a real highlight and I'm inclined to agree that it is one of his best. The band he had at this time and their repertoire successfully combines rock, jazz and classical extremely well and is a great introduction to someone looking to get acquainted with his music.

Speaking of the band, this is truly one of the best units Zappa ever had. The players are all extremely skilled and can execute tricky written arrangements as well as improvise off of anything and transition between styles effortlessly. Joining Zappa on lead guitar and vocals is rhythm guitarist Jeff Simmons, bassist Tom Fowler, his brother Bruce Fowler on trombone, Napoleon Murphy Brock on saxophone and vocals, the incredible George Duke on keyboards and vocals, percussionist Ruth Underwood and the amazing double drum team of Chester Thompson and Ralph Humphrey. That is a serious group of players and Zappa wrote some incredible tunes that showcased all of them at the best of their ability.

Each side of the album starts off with a spoken introduction by Zappa engaging a rowdy crowd before launching into the music. Once the music starts all the songs flow together one after the other like a suite. There are definitely some edits here and there but Zappa was well known for having the tightest band around and could splice parts from one show to another and the tempos would be consistent. The majority of the album was recorded over a 3 night stand at the Roxy in Hollywood as well as shows in Illinois and Pennsylvania plus a bit of studio recordings. The Roxy shows were also filmed and some of the footage has shown up, hopefully a complete show will someday be released. Being able to watch this band in action is something I've always wanted to see. I know a guy who saw this band with the Mahavishnu Orchestra as the opening act play Brooklyn College in 1973 or 74 and he said it was absolutely the best show he ever saw.

Side one is possibly the most accessible. "Penguin In Bondage" is a racy tune with a great groove that doesn't go through too many time changes and flows right into the short "Pygmy Twylyte" and the hilarious "Dummy Up." If you can imagine a collaboration between Duke Ellington and Cheech & Chong, that will give you a good indication of what "Dummy Up" sounds like. Sides two and three are mainly instrumental but contain a catchy vocal tune like "Village Of The Sun" before the band really cuts loose. "Echidna's Arf (Of You)" is a dazzling jam that bears some Charles Mingus influence and seamlessly jumps through many styles. It's followed by the percussion highlight "Don't You Ever Wash That Thing." Most drum solos are kinda boring but this one is not. The two drummers trade solos before setting up a stomping groove for Zappa to play a burning solo over. "Cheepnis" is a funny song paying tribute to low budget 1950's monster movies before segueing into radically different versions of the old Mothers Of Invention songs "Son Of Orange County" and "More Trouble Every Day." The songs are slower than the original versions and have a funkier jazz and blues inflections. The drummers do some incredible work on "More Trouble Every Day" and a few years later when Chester Thompson went to go work for Genesis, some of the same drum fills showed up on their live album. Side four is dedicated to a single song called "Be-Bop Tango (Of The Old Jazzmen's Church)" that has some inspired improvisation and audience interaction. Unlike a lot of prog rock or jazz fusion, Zappa always got the audience involved and would often tailor the concert to who was in the crowd on that night.

Back when I was in high school a lot of the guys I hung around with were really into Yes and the Grateful Dead. Some of their parents were more lenient so we could hang out and smoke pot in their rooms without too much hassle. The only drawback was having to listen to Yes and the Grateful Dead for hours on end. It was pretty lame but better than doing nothing or standing around outside in the wintertime drinking Jack Daniels by myself. Eventually when they were really baked they'd let me play an album side and I'd usually pick one from this album. I figured they'd like the music when they were high but it was usually too overwhelming for them and after a few minutes it was back to Tormato or Europe 72 for the millionth time. A couple of those guys wound up with serious drug problems and suffered pretty hard lives. Some of them are no longer with us. Maybe all the crazy time and stylistic changes on this album kept me a little more awake. Either way, I've always loved this album and am very happy have it back in regular rotation.