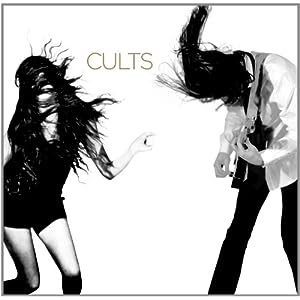 I love music duos. Whether it’s rock, electronic or whatever I love when two awesome musicians come together and create wonderful music. Ever since The White Stripes were fading away in the mid millennium, it seems like I was going to have a void with music duos. Luckily, awesome artists like Justice, She & Him, The Ting Tings, The Kills, MGMT, The XX, The Black Keys, Matt and Kim, and the Cults emerged.

Depending on if you wanted a louder hard rock sound (The Black Keys), electronic (Justice), indie electronic (MGMT), indie pop (She & Him, Ting Tings, The XX and Cults) and/or indie/garage rock (The Kills), there was a music duo to cover your needs. Until now I never consciously realized there has been a resurgence of quality indie music duos. Cults is one of these mysterious bands worth discovering.

Cults is shrouded in mystery, both musically and physically. For the longest time I had no idea who Cults were…literally. It wasn’t until I searched deep in the liner notes and cross referenced with the internet that I discovered there are only two permanent band members in this fantastic, fresh and fun band.

New York duo Cults is the latest music duo that has captured my heart and ears with their infectious indie pop music. The band is comprised of former New York University film students turned musicians Madeline Follin (vocals) and Brian Oblivion (vocals, guitar and percussion). Their throwback 1960s sound instantly blew my mind away with this sensational debut album. I hope more people will soon discover this mesmerizing, mysterious band.

Much like the band Fitz & The Tantrums, Cults rely on a melodic vintage sound that possesses a twist, which makes their music sound both classic, yet fresh. If you enjoy bands like Dum Dum Girls, Drums, EMA, Girls, Yuck, Tennis, Phantogram, and Smith Westerns then Cults is a band up your alley.

Their 1960s pop/ girl group sound embraces the wonderful quality of that musical era and at times feels reminiscent of a Phil Spector “Wall of Sound” production. There is something irresistible of combining the innocence of catchy choruses, yet at the same time remain mysterious while describing dark emotions. The dreamy “Go Outside” is the second song featured on the album and is their best known song. The song encourages listeners to do something instead of just laying around all day inside and actually “go outside” to enjoy life. It’s the perfect song to motivate yourself and remains one of my favorite tracks to listen to while working out.

The moment “You Know What I Mean” came on I honestly thought my iTunes was messing with me because the 1960s girl group aspect sounded too realistic. After double checking my iTunes library a few times I was relieved to find out it wasn’t on shuffle and I didn’t randomly download The Shirelles, The Crystals, The Ronettes, The Supremes, or The Shangri-Las. Follin’s youthful voice perfectly captures that 1960s element efficiently, energetically and most importantly, effectively. “You Know What I Mean” is a song you can lose yourself in.

The deep, dark “Most Wanted” utilizes Follin’s unique and childlike voice. When it’s accompanied by a treacherous instrumentation, her voice showcases the drifting feeling we occasionally experience when contemplating doing something we know is wrong. “Back in my home late at night/ All alone, I'm flying/ Flying above all my troubles/ My mind's a gull/ When I am happy my heart starts to slow/ What I most want is bad for me I know” are just some of the stellar lyrics used.

“Never Heal Myself” is the next track worth mentioning. Follin’s conviction, whether sweet and sincere or a frustrated outburst, is always able to convey mystery with whatever she is singing about. This song is one of my favorites and I really love the ending lyrics, “Yeah I try to heal myself/And turn around cuz someone else/ But I can never be myself so fuck you.”

Powerful beats propel this album to create an exhilarating mixture of emotions. The combination of wonderful melodies with Follin’s flawless voice produces the best damn debut album of 2011. For the past four years, one of my favorite albums of the year also happens to be a debut album. This year is no different. Those artists and albums for the previous four years were Vampire Weekend with Vampire Weekend (2008), The XX with XX (2009), Neon Trees with Habits (2010) and now Cults.

Without a doubt, Cults is an awesome album that entertains you for over 30 minutes and is a must buy. I absolutely adore everything about this 11 track gem. Go discover their wonderful wall of sound and you won’t be disappointed when you join this cult. After all, there is no punch drinking involved.