November 28, 2011
Any regular reader of the Ripple (affectionately known as a waverider) will know that its usually Old School who regales us with tales and reviews from the blues scene.  Unfortunately, due to some personal matters, our brother Old School won't be able to join us for a while, so Penfold and I are going to stretch ourselves and pick up some of the music that Old School would normally review.  In the meantime, our prayers go out to Old School.  We're here for you, brother!

So, with that said, it's time to delve into this stack of blues CD's covering the far corner of my Ripple desk.  Now, when it comes to reviewing the blues, I can't claim to be an expert.  I don't really know my Chicago-style from my New Orleans from my Texas blues.  I got an idea, but I'm not one to toss out references like some blues-Einstein.  But that doesn't mean I don't have a love for the blues.  Besides being the roots of rock n roll, I developed my bluesy taste when I lived in Texas.  There, the long summer nights just couldn't pass without a cold beer or a lemonade, sitting out on a deck at midnight while some blues axeman made his guitar cry and wail. I've been to blues clubs throughout Texas, Chicago, San Francisco, and New Orleans, and the world, always on the lookout for that moaning guitar.  My greatest blues moment came when I stumbled into the long-departed Absinthe Bar on Bourbon Street one late night.  The club, more than half empty, was the home of Brian Lee, a blind guitar-smith who blew the hair from my head with this searing guitar tone and whiskey-soaked vocal chords.  Just me and Brian.  Hour after hour.  Heaven dropped to earth.

With that said, reviewing blues CD's isn't easy for me.  Blues, more than any other music, to me, is a live music.  It's meant to be heard after dark in a smoke-filled tavern.  It needs to be felt to be appreciated.  So, as I go through these CD's, what I'm listening for, what I'm imaging, is how the music would sweep over me in a live setting.  That, for me, is the blues. 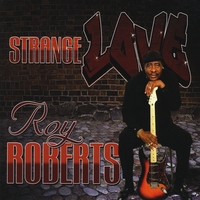 Blues veteran, Roy Roberts, lays down the groove, soulful and funky on his latest outing, Strange Love.  Like a bridge between Memphis Soul and modern Blues, Roberts blends in a Staxy-horn section, some bopping beats and a searing guitar into his soul-blues amalgam.  With a smooth singing style reminiscent of the under-appreciated Robert Cray, Roberts brings a soulful vibe to his muse.  "My Love Bone," is pure soul funk with a bluesy vibe, bopping and sauntering out of the speakers all sexy and sultry.   Roberts is restrained on the six-string here, but when he does turn it loose, his tone is like a slice of custard pie, all creamy and sweet.   "Hey Baby," is a swinging blues shuffle with some tasty guitar licks.  Yep, this would get the crowd out onto the dancefloor.  But the highlight is the intense Cray-like title track, "Strange Love."  Here Roberts perfectly blends his Cray influence with some deep soul and a wailing guitar that cuts through the smoke in the bar like a laser.  Live, I'd be eating this one up, ordering my fourth whiskey and just letting it flow right over me. 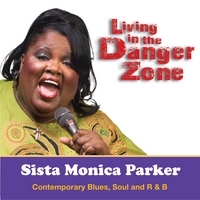 Gotta admit, one look at the low-budget cover on Sista Monica's CD and I just wasn't expecting much.  Let's face it, anybody can assemble a band and call themselves a blues artists.  But, lordy, Sista Monica has made a believer out of me.  First of all, her band really rocks.  I mean, they roll with the fervor of a freight train.   Mike Schermer's lead cuts are so tasty, their finger-licking!  And when Andy Just lays into his harmonica like he does on the opener "Hug Me Like You Love Me," we got us blues delight.  Whether jamming it out, funking it up, or gospeling it down, Sista's band are the real deal  Then there's Sista Monica herself. The opening track doesn't really bring her to the forefront, but by that second track "Living in the Danger Zone," Monica just busts loose. Bringing a deep female tenor to her blues, Sista's voice is full and resonant, deep and moody.  When she digs down into her chords it's like manna from heaven.  If I was sitting in the club . . . well, I wouldn't be sitting.  My hands would be above my head, flapping and giving thanks.    Sista Monica and her band are from SF, so if you're in the area, make sure you look em up.  Your soul will thank you. 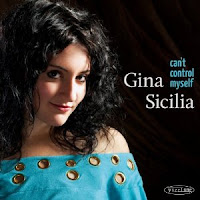 Another disc that caught me way offguard.  Nothing about the coquettish-looking 25-year old woman on the cover could prepare me for the gritty and downright grungy-blues of Gina Sicilia's music.  Blessed by the production, engineering and guitar work of Dave Goss, Gina's vocals pour over these dirty blues cuts like molasses dripping over sweaty, sex-satiated skin.   Hot and steamy, "Addicted," is the moaning of a woman singing sex.  Just pure sex.  Her voice is full and throaty, full of bourbon and cigarettes, and best of all, she's not afraid to let it be not perfect.  I love a voice like this when it cracks and wails with emotion.  "Crazy About You Baby," reminds me of the best of another gutsy blues legend, Bonnie Raitt, who I'm sure Gina would hail as an influence.  Here, she takes the Willie Dixon standard and twists it into a modern ode to seduction and desire.  Hot.  Totally hot.  Now, none of this talk of sex is meant to imply that Gina is a mad seductress.  That ain't what she's about.  Still she exudes a natural sexuality that bleeds through her voice.  Not every track clicks here for me.  I think the reggae vibe of "Before the Night," is a miss, and I prefer her rocking tracks to her ballads, but when it all comes together, like on the jazzy, latin-tinged "Wish the Clock Would Stop," we got something special. 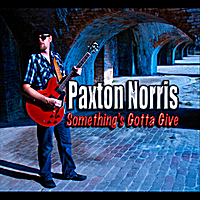 Don't know if I'm saving the best for last or not, but I'm definitely saving the most rocking for last.  You like blues guitar, but you like it with savage fury and fire?  You like it to rock the f*ck out?  Here's the answer.  Just add the name Paxton Norris to your list of six-string wielding axemen.  Still steeped in trad blues, this isn't rocked out blues a la Joe Bonamassa, this is more like Corey Stevens best.  Thick and ballsy blues tracks laying the foundation for Paxton's guitar to set fire to the plantation.  Nothing about this disc sounds like a debut album.  Paxton's tone is so confident and assured.  His vocals are laid down full of guts and soul.  Even his songwriting seems world-weary and veteran, laying down lyrics about the tough times we're all living in.  "Something's Gotta Give," is a blues rocker ready to take its place in the pantheon of great cuts.  "Living Tight" sears with is guitar attack, while "Going to Pensacola" rocks with a ZZ Top fever.  This track alone should introduce the world's rock fans to the new-found talent that is Paxton Norris.