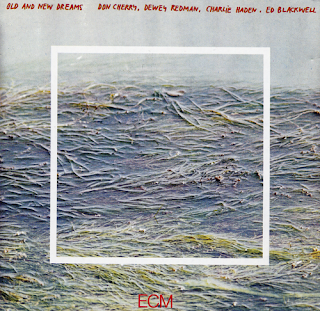 In the never ending battle between time and money, I will take time every time. I will also take content over technology. Even though I lost my job a few months ago and money is tight, having extra time to get re-acquainted with old gems on my LP shelves has been very rewarding. The self titled 1979 album from a band of Ornette Coleman alumni called Old And New Dreams has always been a favorite of mine but it was unplayed for many years. Now with the luxury of time on my hands it's back spinning on my turntable on a more consistent basis.

Ornette Coleman's music is a mystery to most and just plain unappealing to some. What no one will deny is that Ornette has played with some of the greatest and most creative musicians who have ever lived. In the mid-70's, as Ornette moved into using electric instruments, some of his best players put together Old And New Dreams to play his acoustic compositions as well as their own. Don Cherry (trumpet), Charlie Haden (bass) and Ed Blackwell (drums) were his key collaborators in the 1950's and Dewey Redman (tenor sax) worked with him in the 1960's. What a band! All of these musicians were part of the so-called New Thing, or Free Jazz, but their roots all ran very deep. In addition to being great improvisers they're all each great composers. When you put that combination together, special things are bound to happen. Like this album.

The album opens with "Lonely Woman," one of Ornette's most famous and accessible songs and their version stays faithful to the original but may even surpass it. ECM Records, who released this album, is well know for immaculately clean recordings. Every instrument is beautifully recorded and reinforces the song's slow boil mysterioso. Charlie Haden's deep bass groove merged with the incredible drumming of Ed Blackwell drive Don Cherry and Dewey Redman to deliver fantastic solos. Blackwell's drumming is simply unbelievable on "Togo," his arrangement of a traditional Ghanese song. You like cowbell? You've never heard it like this before. Side one wraps up with Don Cherry's composition "Guinea," which starts off slow but ends up swinging.

Side two starts off with a great Ornette Coleman song titled "Open Or Close" that Ornette never got around to recording himself. I'm not sure when it was written but it's a classic example of harmolodics in action. Dewey Redman's contribution "Orbit Of La-Ba" has him playing snake charmer melodies on a musette and some more incredible African influenced drum breaks from Blackwell. Haden uses a bow on his bass to create incredible underwater sounds on his tune "Song For The Whales." It's too bad Jimi Hendrix never got to jam with Haden, the tones he produces on an acoustic instrument would have really flipped his lid.

Like a lot of great albums, this is sadly out of print but it should't be too difficult to track down a used copy. Playing this album again after all these years has really reinforced that the simple act of listening to great music can truly be one of life's great pleasures. The album was paid for years ago and the music still sounds like it's from the future.