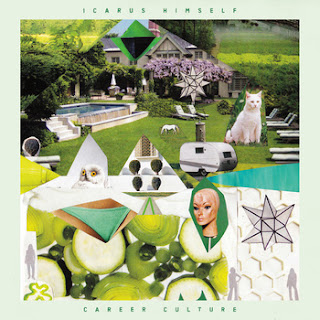 You know that already-expansive, ever-growiing list of bands "you totally need to hear before you die!"  The one you keep on your hard-drive and try not to look at because doing so will fill you with a feeling of utter failure and the sense that you are nothing but a miserable speck on the shit-smeared canvas we call Earth? The list filled with 250 semi-clever band names that are bad puns or references to some mythical creature or an 80's pop icon - names like EarEctile Dysfunction, Tidy Aphrodite, or Shumway's Comet? (And for all you wave-riders who have real jobs or are just out of high school, that's an "Alf" reference - a classic american-sitcom which aired between 1986 and 1990.)  Well, this week I was fortunate enough to scratch a name of that frustratingly-long list: Icarus Himself.

Having never heard the band before, I felt it was only right to go back and take a listen to their previous work so that I could fairly judge the progression of the band and decide for myself whether they had enduring talent or were merely some semi-clever band with a semi-clever name.  Fortunately for me, I was pleasantly surprised by what I heard, to wit:

The second full-length release from Icarus Himself is entitled "Career Culture," and is described by the band's Science of Sound label as "a sonic cinema in electro-psych-folk, drenched in the influences of artists like Kurt Vile, Deerhunter, The Who, and David Bowie."  And while comparisons to Kurt Vile and Deerhunter are not without merit, I would personally say that "drenched" is a misleading adjective.  "Lightly spritzed" would be more accurate, especially when applied to the Who and Bowie.

As the album's first track "Wake Up" begins with a softly-plucked and dreamy Db maj arpeggiation, I suddenly wondered whether I was listening to Bright Eyes' "Road to Joy," but alas, I was wrong.  (And to their credit, they do not have much in common with the whiny, emo-indie-folk castration that make up Bright Eyes.)  The song serves well to establish the contemplative, melancholic vibe that will reign dominant throughout the rest of the album, in songs like "Mornings at the Bar" and "Half Moon Eyes," with band-founder Nick Whetro's voice, heavily-soaked in reverb and typically-overdriven, providing a fittingly hopeless delivery, as if he'd taken vocal lessons from Damon Albarn and then did his best Edwyn Collins impersonation.  Whetro's lyrics walk a fine line between introspection and self-indulgence, but manage to steer clear of pitiful despondence that is all-too-often confused with depth and personal-awareness.

Occasionally the devitalized spirit of the music is punched through with bright yet fleeting flashes of intensity in songs like "Anywhere You Go" and "MCO," the latter of which reminds me more of early, live Velvet Underground than any other classic rock name I could muster in my current state of exhaustion.  That energy then quickly subsides back into the more typical delicately-layered synths and gentle guitar work of Whetro and band-mate Karl Christenson, with drummer Brad Kolberg's sparse-yet-functional style providing only the necessary elements to maintain the momentum and keep the songs from drifting into ambient-noodling.

Ultimately, this album shows growth and refinement of the bands sound and songwriting skills, stringing together an interesting collection of styles with a consistent pathos and sonic characteristic that they pull off about as well as any of their contemporaries.  I will certainly be keeping my eye out for more from this band in the future, and am looking for an opportunity to see how these songs hold-up in a live performance.  (So come out to Philly, you bastards.  I even know a few bands who'd make perfect openers for you.)

P.S. -  Should you ever want to make a dent in that seemingly-infinite list of music, there are 2 things you can do:  (1) Forget all your personal hopes and dreams, quit your day job, and find a gig that actually pays a decent wage to review music (HA!).  If you're looking for an easier and more reasonable option, you can (2) Spend a month downloading everything on that list, put it all on your preferred portable music device, securely attach the device to your hip - so tightly that not even the hand of God himself could take it from you, put on your headphones, and then place the barrel of a 9mm semi-automatic handgun in your mouth and pull the trigger... it's gonna take the rest off eternity to listen to all that music, and now you've got it.  You can thank me later when I get to hell.