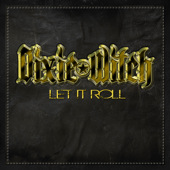 Now this is my kinda album - no ballads, no keyboards, no acoustic guitars! Dixie Witch is a band you can count on for heads down, no nonsense boogie. Anything less from a Texas three piece rock band would be complete heresy. Let It Roll is the first Dixie Witch album since 2006 and marks the debut of new guitarist Joshua "JT" Todd Smith alongside the usual rhythm section of bassist Curt "CC" Christenson and singing drummer Trinidad Leal.

Right out of the gate, the band hits hard on the opening title track and you'll be reaching for the volume knob. Is that the new Dixie Witch? WELL, TURN IT UP! The intensity picks up on the 2nd song "Boogie Man." For those of you who have been waiting the past 30 years for The Rods to write a follow up to "Rock Hard," your time has come. This song is the perfect blend of Blackfoot and early Krokus (some of their early tapes are pretty good, and you know it). "The High Deal" is a great song to fire up at quitting time as you go space trucking to happy hour. There's also a great song called "Anthem" that thankfully has absolutely nothing in common with the Rush song of the same name.

There isn't a dud on this entire record. 10 songs kick ass songs in 36 minutes will leave you wanting more. The production is great, heavy but not metal guitar sounds, pounding drums and thunderous bass. Let It Roll was designed to be played loud in a moving vehicle. Rather than write about it, that's exactly what I'm gonna do right now.