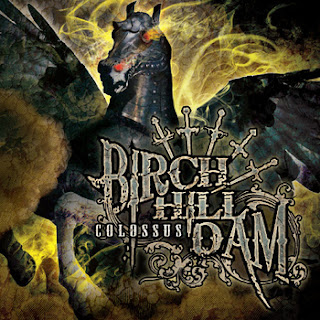 This just in: Birch Hill Dam in Massachusetts is at its highest flood stage since 2008. The US Army Corps of Engineers has opened the floodgates once again and thick rock/metal is now overflowing into the surrounding area and across much of the world. All residents are advised to enjoy every bit of it. I know I am.

Okay so I'm being more than a little over-dramatic and the flood has been raging for a while now. But I feel Colossus, the sophomore album by Birch Hill Dam, is just that - it's titanic. I love the chunky, southern-influenced metal riffs and heavy-duty drumming by Sam Barrett (guitar) and Matt Neely (drums). Mike Nygard (vocals) is dynamic and he can sing any style he wants, but what really blows me away is the gnarly bass-playing by Pete Gelles. I think he's is such a standout on this album.

Birch Hill Dam show off Gelles and his bass is highlighted throughout much of Colossus. During the first neck-straining song, "Colossus", Nygard exclaims, 'Check this out!" as Gelles busts out some funky-ass bass followed by Barrett's guitar solo. I don't usually get to hear bass-playing like this on a heavy rock album. I'm delighted and I find myself focusing on Gelles' talent during each head-banging number.

The bass player gives a helluva stellar performance on "2600" too. I don't know if he's a slapper or not, but right now I'm picturing him spanking his bass like a red-headed stepchild on this tremendously sludgy, southern rock/metal track. This is definitely my favorite song on Colossus and Gelles is a big reason why. His varied mega-riffs alternate between Barrett's own licks during a lot of this one.

I'm hearing some sledghammer bass on "Ivory Tusk", too, and it's wicked. Influences of Corrosion of Conformity pour out on "Slavedriver" and I think it's one of the most punishing songs ever by Birch Hill Dam. Ditto for "Holy Days Aren't Here Again", in which I'm partly reminded of Kyuss. This one even has some well-placed organs/keyboards. So does "Spread Eagle". "Threatening Skies" includes another recognizable Kyuss-like riff and I'm loving it.

Sweet! Now I have more than a couple additional 'favorites' on my mp3 player and I can understand why Nygard includes so many expressions in his songs. "Yeah!"  "C'mon!" "Ungh!" They're not just filler words. This music makes me FEEL. I can't hold it in either and I'm agreeing with him - out loud. Ungh!

One thing: I have 9 songs on my digital copy and the last is "Burn in Hell", an old-school metal cover, I think. Sounds sorta like an old Metallica-style song or something and once again, bass drives it. But I just saw that it doesn't appear on the Bandcamp track listing. Hmmm. Maybe that song is a bonus when you buy the album. Don't know.

I told you a while back about some rookie starters who I added to my rock/metal roster. Well, Birch Hill Dam have worked their asses off and they're my new starting forward right now. After hearing their cover of Kyuss' "Green Machine" on their self-titled debut I knew this band was gonna was gonna bring it on their follow-up. Listen to Colossus (June '11) for yourself at Bandcamp and then buy the album if you haven't already. And tell your friends.