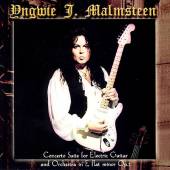 Pull out your best headphones, turn down the lights, close the door and sit in your most comfortable chair.  We are going on a journey into genius with a virtuoso guitarist.

Yngwie Johan Malmsteen is one of the greatest technical guitarists ever to grace the earth. Born in Sweden in 1963, he gained stardom in the mid-1980’s with his neo-classical approach to heavy metal guitar.  His best known album is Odyssey and, if you haven’t heard it, you should or, for that matter listen to any of his other heavy metal releases. He continues to produce one amazing release after another and his stage shows are legendary. However, even he will tell you that his masterpiece was not a heavy metal album.

In 1998 Malmsteen wrote Concerto Suite For Electric Guitar and Orchestra in E Flat Minor Opus 1 and performed and recorded it with the Czech Philharmonic Orchestra in Prague.  Here is Malmsteen at his most expressive.  On just the first of twelve tracks, or should I say movements, “Icarus Dream Fanfare,” he makes his guitar sound like a violin, a cello, and somehow it is still amazing clean shred metal guitar backed by a complete orchestra that gives the entire production classic majesty and grace.  Like any great classical music it brings you through dramatic highs and lows and you get lost in the music.

The second movement, “Cavalino Rampante,” is an unusual piece akin to a rushed dirge.  You  can feel the lonesome landscape of Sweden in the fading Arctic winter light as Malmsteen plays counterpoint to the orchestra’s clipped strings and building tension.

The piece “Fugue” speeds down a slope in a waltz of frantically pick strings and twirls in unison as echoed voices rise to the call of the percussion.  It’s like Disney’s “Fantasia” with Mickey playing a electric guitar instead of a pail and mop.

The fourth track “Prelude to April” promises a sad romance. Malmsteen plays a nylon string acoustic guitar. He and the orchestra take us on a faintly classical Spanish journey with a sustained eeriness and building rush.  It is followed by another movement, “Toccata,” where Malmsteen’s nylon string guitar fronts a sustained orchestral eeriness in order to showcase Malmsteen’s guitar virtuosity.

For “Andante” Malmsteen pulls out the electric guitar.  This is a soaring composition with a repeated melody.  I can close my eyes and see armies on the march.

The seventh movement, “Sarabande,” returns Malmsteen to the acoustic guitar.  This time he displays some of the fastest musical acoustical lead progressions that I have ever heard.

The “Allegro” explodes and the “Adagio” complains.  Concerto themes are repeated and Malmsteen adds an electric guitar that wails, cries and talks to the orchestra.  There is a conversation going on  and you’re right in the middle of it.

The start of “Vivance” is thunderous.  The guitar playing is exacting and frenetic. The tenth movement builds and then, as if clouds have parted, Malmsteen’s guitar is allowed to shine and plea. Then the orchestra answers.

“Presto Vivace” is the penultimate, the track that leads to the “Finale.”  Here, Malmsteen brings all of his themes together. It is a fast and furious gathering with echoed voices, swirling guitar, flying fingers, flying notes, bursts of timpani and cymbal and, ultimately, the “Finale” grace note.
This is the album that Malmsteen calls his “pièce de résistance.”  Who am I to argue with that?