Sleestak -The Fall Of Altrusia 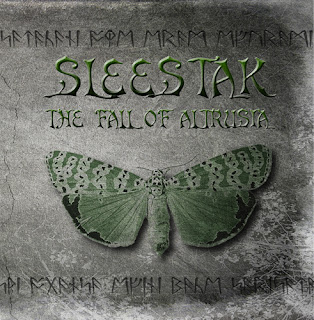 While walking along the beach in the early hours of the morning I discovered something curious.  I noticed a small, dark object a good distance away from me being buffeted by the waves hitting the shoreline.  It didn’t appear to be moving much at all however, so I didn’t quicken my pace to save it from the tide.  As I came closer the object resolved itself into what at first appeared to be a simple box, then a box made up of material that looked like darkly stained wood, and eventually a finely wrought wooden box covered with beautiful ornate carvings across its exterior.

I knelt down beside the box in order to get a closer look at the carvings.  They were extraordinary!  There were several highly detailed moth-like creatures pictured alone or interacting with other humanoid yet reptilian creatures. Situated all around these moth-like and reptilian beings were glyphs, uniform in height, which must have been writing of some sort.  Never in my life had I seen anything like this firsthand.  The only comparison I could draw in my mind was to Egyptian hieroglyphics.  Would someone have dumped this artifact here on the beach?

Combing the surrounding area revealed only one set of footprints arriving or leaving, mine.  Also there were no other people anywhere near my position on the beach.  I quickly made the decision to take the box back to my apartment, where I would safeguard it until I could notify a museum or historical society about my discovery.  With my mind made up I proceeded to lift the surprisingly heavy box from the sand and began the long walk home.

Matters quickly grew more complicated after I arrived back at my apartment.  I set the box on my kitchen countertop, went into my bedroom and turned on my computer.  Once it was booted up I searched the internet for locations and phone numbers of major museums located near my place, turning up three.  Unfortunately my calls to all three museums were met by automated messaging services, each of which stubbornly refused to let me leave a message.  If I wanted to talk to an actual person, I would have to wait a few hours to allow the museums to open.

Waiting was not my strong suit, so I went back to the kitchen to further examine the box.  I ran my hand over one of the moth-like creatures carved into the top of the box.  Shockingly, the slight pressure I applied caused the carving to sink into the lid!  A muted click followed, and the lid rose ever so slightly off of the box.  Throwing caution to the wind I tried to lift the lid further, but it would not budge.  It did however tilt up on hinges hidden inside the box/lid frame.  Not knowing what to expect I crouched down behind the countertop before I opened the lid completely.  Several seconds passed and nothing jumped out, nothing bit my hand, and nothing appeared to be released into the air above the box.   Feeling safe I stood back up and let my gaze fall on the box contents.

The very first thing I noticed was a sheet of paper.  The glyphs on the outside of the box also appeared on the paper, but incredibly there were English translations!  The first English translation read, “If you are reading this, I am most likely dead.  My name is Enik and this is the story of the Altrusians.”

Can I have a moment of your time waveriders?  Thanks.  I’d like to focus your collective attention towards an incredibly interesting band.  Their name is Sleestak, and they’re here to take you on an exciting musical journey you won’t soon forget.  First things first however, let’s get what’s obvious to some out of the way.  Based on the group’s name and their album title some of you astute waveriders will have undoubtedly made the connection that the members of this band are fans of the show Land of the Lost.  If you are not a fan of that particular show have no fear.  Knowledge of that fictional universe is not required to enjoy this musical offering.  Now let’s get to the good stuff.

Sleestak is a four piece band out of Milaukee, Wisconsin.  Trying to pigeonhole them into one genre is impossible.  Are there doom metal passages present?  Yes.  Is it psychedelic at times?  Definitely.  Do stoner rock elements make themselves felt throughout the album?  Absolutely.  Would portions of this album fit well on any 1970’s era progressive rock album?  Indubitably!  And that’s part of the beauty of this band.  They are not going to fit into your pre-rendered mold.  They are Sleestak, plain and simple.  Take it or leave it (here’s a hint…take it!).

The Fall Of Altrusia is the band’s second full length album, and it packs a wallop.  It’s a fifty minute long concept album divided into seven chapters.  One of the first things I noticed about this album is the fluid and seamless song progression, and I do mean seamless.  While listening for the first time I was literally shocked to look down at my player’s LCD readout to find I was listening to track 3.  I was so enchanted with the ebbs and flows of the music that when I attempted to determine when the first two tracks might have ended I came up blank.  That my fellow music lovers, is a rare and special gift.

Another talent this band clearly exhibits is the ability to keep the listener’s attention.  The songs easily transition from righteous heavy riffing to quieter, more introspective psychedelic/progressive passages that keep the listener glued to their seat waiting to hear what comes next.  The vocals are of special note here.  During the loud, doom-laden, riff-heavy portions the vocals are sandpaper-harsh.  The growls and yells help accentuate the band’s aggression.  On the other hand when the band settles down into their calm and pensive gear the vocals completely change.  Gone are the yells, replaced with clean singing…but there is a catch.  To maintain the other-worldly vibe the band has going, the vocals are put through some kind of filter to make them sound as if they were recorded underwater.  It’s weird, but it works very well.

Waveriders, The Fall Of Altrusia by Sleestak is an album that you need to hear.  It will take you away from your day to day grind for as long as you need it to, and it will do so with a fearsome smile all over its green-skinned, scaly face.  Remember, it’s not just an album.  It’s a journey.  Buckle up!