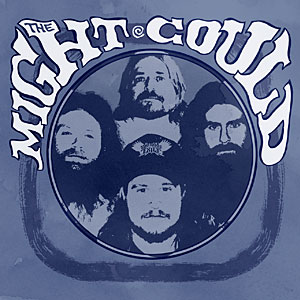 I'm hangin' with my hound dog and sippin' moonshine on the back deck. A cool October breeze is blowing - the leaves are falling - and I'm rockin' out to the southern-fried, self-titled debut by The Might Could. At this moment I'm reassured that life can be pretty sweet sometimes.

I'd bet that members of the Richmond, Va., foursome, are also loving their lives right now. After all, it's been months since The Might Could  (Small Stone Records) started damaging eardrums and all the accolades started pouring in. I think former Alabama Thunder-Pussy guitarist Erik Larson (vocals/guitar),  TJ Childers (lead guitar/vocals), 'The Rob' Gouldman (bass) and Ryan Wolfe (drums) deserve every bit of recognition they get, including a second feature on The Ripple Effect.

No..I'm not quite drunk yet...just really tipsy...and maybe a little hungry. (Sip). I can put that off a little longer. There's more than enough tasty morsels of full-flavored rock/metal on The Might Could, anyway. The opener, "Stone Colossus", rolls in with slammin' drums and a rompin' southern groove before busting into some bass-filled sludge followed by a smokin' guitar solo. Straight-up Sabbath licks appear near the middle and then we do it again. Oh yeah. That's what I'm talkin' about.

For me, the most kick-ass song is clearly "I Don't Even Like Pantera Anymore". The title confuses me for a second, until I realize these guys have a good sense of humor. Pantera-inspired riffs and vocals don't do much to make me believe the Might Could dislike the metal masters from Texas. And Childers' guitar solo is a rendition of Dimebag's from "I'm Broken", on Far Beyond Driven. It's my guess that instead of a slam, this track is the band's tribute to Pantera. And it's a good one.

The slow and soulful, "When the Spirits Take Control", is a choice southern rock song. If you ask me, this is their "Simple Man" by Skynyrd. It's their "Freebird". Rock on..(Sip). "Let 'Em Up Easy" starts off that way - easy - with 90 seconds of bluesy-slide guitar from Childers. Then it gets bouncy when the rest of the Might Could join in and I have to get outta my seat. This one will make ya move. I guarantee it. With about 90 seconds left you're blessed with more slide work before a crazy solo.

The Might Could washes me with a familiar old-school metal feeling that I miss, too. Killers by Iron Maiden, in particular. Maybe it's just the rapidly-disappearing moonshine, but as I'm listening to "Wretched Wraith" a picture of 'Eddie' appears in my head and I'm back in the 80's. I'm sure the vocals and lyrics have something to do with that, but the same happens on the 8-minute finale, "The Fall". Is it just a coincidence? I don't think so and it don't bother me one bit. I embrace it.

Keep listening after the last song you'll be treated to some friendly banter between band members in the studio. (Sip) It's hilarious and I've always enjoyed hearing recordings like this on an album. It's just the band being themselves and it affirms my belief that the Might Could love a good laugh. As do I. And I laugh out loud.

"Do you want me to go imitate you playing drums?" one asks.

The ribbing continues and it's funny as hell. Give it a listen - after the music of course.

I love The Might Could. However, I have a feeling the band should have a more confident name 'cause their debut sure DID kick my ass up one side of my back yard and down the other. My neighbors were probably wondering what the hell was going on. Like moonshine, some of the vocals may be an acquired taste for a few people - at times they're pretty harsh - but I'm definitely including the Might Could among my top new Small Stone Records artists. Beefy southern rock/metal couldn't get much better for me. Well...it might could. (Sip).