Elemental Zazen - Nothing To Lose But Change 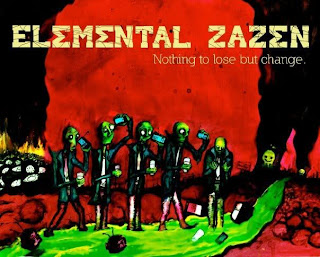 It’s a rare occurrence for me to get excited about a hip-hop record. Over the past few years (decades?), hip-hop has come across more about the glorification of excesses than anything of substance, of fresh ideas, of empowering messages. The days of old, when Chuck D would wax poetic about the injustices of the world and the inequalities of the young black man; even the sometimes fantastical glorification of the thug life from rappers like Ice-T, Ice Cube, Dr. Dre, et al had substance because they were narrating warnings of the do’s and don’t’s of a depressed life and desolate options of life in the hood. And though, I’m sure, there have been masters of the rhyme game who have written and recorded material of substance since then, all I hear or see is someone yammering away about their lowered ride, their shiny-blingy rings, their downpour of cash, and though it all may be a metaphor for dreams of a better life and lifting oneself from the dregs of depravity, it never really digs into the root of the problem that these artists face.
How did they, the artist, get to this point? How did we, the people, get to this point? I don’t have one singular answer for the questions. I don’t think one exists. Sure. It would be easy to point the finger at racism, but that doesn’t explain how we, the people, go to this point. Greed? Too simplistic of an answer and, as heinous as it is, that doesn’t quite feel like the correct answer. 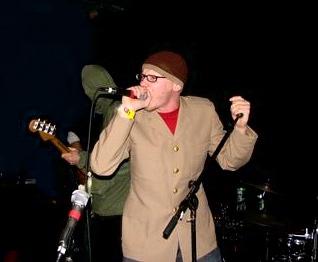 Where am I going with this? Well . . . I’ve been doing a lot of thinking, and I blame it on Elemental Zazen’s record, Nothing To Lose But Change. Released in 2011 through Gnawledge Records, it’s a hip-hop record that has done something that no hip-hop record has done for me in well over two decades . . . made me stop and think. Not simple, whimsical thoughts about saving the whales, but deep, life changing, life affirming ideas that now have me questioning a lot of what I’ve believed throughout my entire life. Powerful shit, man. Corporate greed, capitalism, class inequality and warfare, social perceptions and judgments, internal strength . . . Nothing To Lose But Change is a bubbling cauldron of percolating ideas that give the listener just enough meat to feed their appetite and leave them hungry for more information and knowledge.
“Bricks and Mortality” has a dense groove that is the musical moment from this album that made me fall back in my seat and take a deep breath. The music has an ominous tone and the lyrical content matches perfectly as the MC paints an image of the have-not’s fighting for every morsel of survival while the have’s simply fight amongst themselves to make themselves richer, and ultimately distance themselves even more from the have-not’s. This is an amazingly crafted tune that captures the desperation the working class faces day in and day out to simply put food in their mouths, their inevitable need for escape through drugs and alcohol, and never getting closer to that comfort level that we all desire.
“Kill ‘em With The Beat” is a bit of a change of pace . . . a little more upbeat sounding, though still with a dark undertone, yet dance-able. The lyrics have an ambiguity to them, but I’m getting a message of living with one’s beliefs, being open to change, and inner strength. The chorus has the deadliest catch of them all, instantly memorable and infectious, and the best line is early on, “hell is a hell of a place to hide”. The tune is a mover. 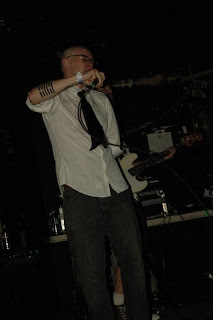 Every so often, a song comes along that makes me think, “Damn. If I had a theme song for when I enter a room . . . “, and in the case of Elemental Zazen, “Words That I Write” would be that one. The intro, the build up, and the sheer intensity of the vocal performance sends chills across my skin, gets me fired up and energized. The music makes a statement that can’t be ignored. Lyrically, the tune is a stream of conscious dose of poetic majesty. The dynamics of the music works in natural harmony with the vocal attack, and I can’t help but get excited and pissed off at the same time. It’s the kind of song that makes you look long and hard in the mirror, making you question what you’re here to accomplish, and how are you going to meet your life goals? Are you here to just take up space and breathe in, breathe out, contributing nothing to your society, or are you that game changer who was put on this earth to help your community, to bring a better life to those around you? Fuckin’ strong song and creeping up my All Time Favorite List.
I’m excited about this album. Flat out. It has power to it that I haven’t felt from this particular genre in a very long time and I don’t think I would be along in feeling that. It’s a universal message of power, or at least, taking the power back from those who currently hold it. Listen to the track called “Greed”, which is more of a narrative or sound bite from a college lecture about the harmful effects of capitalism. It’s the kind of message that will make you stop and re-think your stance on the subject, or investigate it more to become better educated on the matter. And really, that’s what I think I was looking for from a hip-hop record. Make me question my own beliefs. Make me re-think my positions on the topics that matter. It doesn’t mean I need to change my beliefs, but I’m being open to new views on them and being that I have the freedom of choice, I can then decide what my future holds. For now, though . . . my future holds another spin of Nothing To Lose But Change.
-- Pope
http://www.myspace.com/elementalzazen
http://www.facebook.com/elementalzazen

It's quite interesting band.. the most important is that live perfomance is rather qualitative.Nice