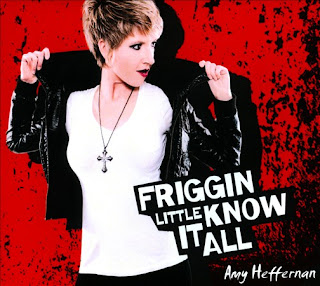 I was at Disneyland with a couple of male college buddies. All morning and afternoon after every ride or two we would take the Monorail to the Disneyland Hotel for a beer. (This was years before Downtown Disney was built in the parking lot.  Back in the day alcohol could only be purchased at the Hotel. It was not permitted in the park.)  We had a buzz on and we were being a bit ridiculous.

We returned to the park and hid in the Gondola ride to smoke out of the watchful eye of Mouse Security (Don’t try this now.  I’m told that today there are long range cameras that monitor the Gondolas.)  We disembarked from a swaying car, now in a toasted euphoric state, not far from the Davy Crockett Explorer Canoes and immediately got in line.

In front of us stood a beautiful statuesque and well-endowed blonde young woman with two or three of her friends.  She wore a red halter top that was at least two or three sizes too small for her ample bosom.  On the shirt between her breasts were the words “Déjà vu” in a handwritten font.  I couldn’t resist.  I walked up to her and stared directly at the words without ever looking at her face and said, “Haven’t I seen you somewhere before?”

I was slapped so hard that I don’t actually recall getting out of line.  I’m told friends helped me over to a bench where I gathered myself before we decided to get back on the Monorail and head back to the Hotel for another beer.

Why do I tell this story?  Well, it’s because, in a way, it describes the Amy Heffernan release Friggin Little Know It All.  It is not just that the first track, “Ignorant Pig,” is an apt description of my actions on that day of debauchery at Disneyland.  The music is pop, somewhere between Lady Gaga and Pat Benatar, but it also has “POP”, as much as a statuesque blonde with a great right hook. The tracks are playful and cynical punctuated by catchy lyrics and compelling vocals with orchestration that makes you just want to play motor boat.

The songs are all originals.  Many bear the hand of songwriter/producer Doug Heffernan, Amy Heffernan’s talented vocalist, guitar and keyboard playing brother. Other band members are bassist Steve Giles, guitarist Tony Gray and folk and grunge drummer Dan Nelles. Pro-skater Jeremy Wray appears and is featured on the final track “Rasputin.”  Cal Curtis, who helped write “Second Chance” for classic rockers .38 Special, helped the Heffernans and Giles write “Friggin Little Know It All,” “Dance Ourselves Sober,” and “Creepin’ me out.”

One more thing makes this album similar to my chauvinist barn animal behavior. I think Amy is also onto something big.

Edwoodfan said…
Loved the Disneyland anecdotes that open this review. Now I need to go check out Amy Heffernan!
October 12, 2011 at 4:44 PM