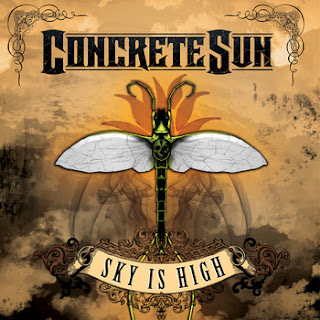 This gig is the greatest and one thing I'm learning fast is that my kinda music knows no boundaries or borders whatsoever. I'm listening to awesome tunes spanning the globe. It's like I'm on a rock/metal world tour.

Next stop: Serbia. Yep...I know. The only sounds I've heard from there are the grunts bellowed by hot women tennis players. I never thought my next top southern metal album would rise from a former war-torn country in southeastern Europe, but Concrete Sun (now that's heavy) sure blew me away with their debut, Sky is High. It teems with jackhammer riffage straight outta NOLA, and overflows with super-weighty vocals. I love Sky is High more than a fat kid loves cake and I quickly included it among my favorite releases of 2011.

A huge 'thank-you' to guitarist Bojan for hooking up The Ripple Effect with a digital copy of Sky is High. This is what he told us via email:

"Concrete Sun is a five-piece band from Novi Sad, Serbia. 'Southern sludge-n-grunge' is probably the closest you can get in an attempt to put us into a genre, but there's a lot more to the story than just that." Bojan said, "Our music is a blend of southern rock, blues, stoner, groove, sludge and grunge, characterized by bluesy melodies, sharp vocals and heavy riffage."

I couldn't have put it any better Bojan, but I'd like to add that it's also phenomenal music. Sky is High is 9 tracks of fresh southern heaviness that I've been craving for what seems like ages. Sure, veterans Crowbar finally have a new album, but Down and Eyehategod haven't put out any new songs in while and the real C.O.C. ended years ago. So did Acid Bath and Floodgate. Concrete Sun are the new European rookie starters on my southern metal roster. Hell to the yeah 'cause my Jonesin' days are over for now.

On the outstanding Sky is High, I hear hints of Black Label Society guitar licks along with the NOLA-inspired riffs. The vocals excite me, too, and bring back fond memories of another southern rock/metal darling of mine - Sixty-Watt Shaman. This album is hard as granite and I enjoy every song.

"Just a Beginning" (3:43) is the first on my copy, but shows up last on the Bandcamp track listing. No wonder it's one of my faves. It pulverizes me like a cinder block to the head the riffs are so dense. I think it's the beginning of a first-class album. "Euphoria" (4:24) is next, with dual guitars mixing it up before a rolling groove takes you along for a ride.

I think one of the best on Sky is High - musically and vocally - is the longest, "God Forsaken Prostitute" (5:49). It's pure southern metal greatness...but the poor girl. You can almost feel her pain. Kidding. "Ruff Song" (3:10) is the bluesiest to me and just might be the most appealing to the general public. The title track "Sky is High" (4:00) begins with an intimidating southern riff and "Hide Behind" (4:22), another top choice, is peppered with Zakk Wylde guitar squeals.

Concrete Sun are looking for a record label, Bojan wrote. Hello...? Ripple Music...? The band was formed 2007 and went through a lot of lineup changes which halted its initial progress, including a year-long hiatus in 2009. Current members since 2010 include: Cerovina Strahinja (vocals), Mijatovic Bojan (guitar), Zivkovic Budimir (guitar), Petrovic Strahinja (bass) and Topic Milos (drums). Each "continues to evolve musically," according to Bojan, "with every member bringing their own set of influences into the story."

Sky is High by Concrete Sun (Aug. '11) can be downloaded in digital format (name your price) from Bandcamp. It's a must-have for any fan of 2-ton southern metal so click the link below and get crushed. Now.