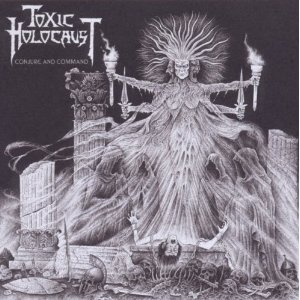 Portland, Oregon’s Thrash Masters, Toxic Holocaust are at it again! For three years I have been waiting for the follow up to 2008's An Overdose of Death. I must say, it was well worth the wait. Toxic Holocaust give an epic thrash album in Conjure and Command. My thrash loving brethren: take notice, this ain't your daddies thrash.

Damn Waiveriders, the album is fucking rad. If the Zombie Apocalypse, World War 3 or some other totally fucked up End of The World type situation went down, Toxic Holocaust would be my soundtrack. Every song is pure thrash aggression.

“Judgment Awaits You” is the lead off track. It's 1:57 of pure thrash bliss. Thrash purists will love the aggressive guitars and vocals. Instantly this song starts off with a full on wall of sound. The furious drums, aggressive guitars and Joel Grind's vocals are top notch. “Judgment Awaits You” leads us into the song, “Agony of the Damned”. This song starts off with a drum beat that is very doom like. This doom feel soon ends as the tempo rises and bam!, the wall of thrash hits you.

My personal favorite track on the album is “Bitch” . This song starts off with a nice mid tempo d-beat. Anyone who is big on awesome riffage will love “Bitch”. From the opening guitar lick they keep the onslaught going throughout the entire tack. Grind's vocal delivery is intense to say the least.

Some other awesome tracks on Conjure and Command include: “I Am Disease”, “In The Depths (Of Your Mind)”. Let's stop right there for a moment, “In The Depths (Of Your Mind)” is fucking awesome. This is truly a stand out track and deserves to be talked about. This is to me a very classic thrash song. The guitar work is insane! It so fast and the solo work is amazing. I'm not even a big fan of solos but damn, Toxic Holocaust does it well. The vocals are aggressive but you understand every word. When I first heard this song it seriously lit a fire under me and I wanted to punch something. It's easily one of the big head banging jams.

So, Toxic Holocaust, Conjure and Command...buy it now! You won't regret it. While you're at it pick up their other albums...all of 'em! You won't be disappointed. There aren't a lot of new pure thrash band out there. Toxic Holocaust definitely rank highly among the best of a dying breed.

Dimaension X said…
I didn't like this band for a long time - then as soon as I started writing my own simple thrashy music for my live rock band, I gained an instant appreciation for this style.

Just great neck-snapping thrash metal. And when they drop the d-beats and slow down to a standard rock groove they just play this style perfectly. You can't help but tap your foot and throw the horns high!
July 24, 2011 at 10:58 AM