Rick Barton and the Shadow Blasters – An American Rock Song 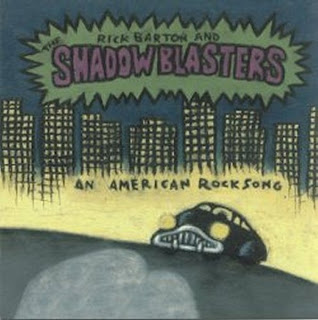 There’s an iconic scene in the movie “American Beauty” where the characters and the audience are mesmerized by an image of a plastic grocery bag blowing in the wind.  Caught in an updraft, it circles, flips, dips, and twists in an almost surreal ballet.  The bag itself is ugly.  The dirty sidewalk it drifts above is filthy.  But the juxtaposition of these two images with that weightless floating creates a scene of magical beauty.

Welcome to Rick Barton and the Shadow Blasters debut album An American Rock Song, except take that image of the plastic bag and substitute a floating, circling strip of leather, faded and tattered.  Edges worn from years of hard living and abuse.  Color faded and cracked.  Imagine that tattered piece of leather floating through the air like that magical plastic bag, rising and falling, climbing above the gutter and the garbage on the street, leaving behind the similar rubbish.  It's ugly, but it's seeking to soar. 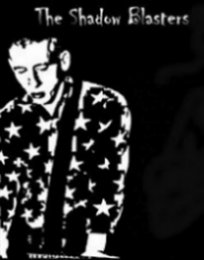 Mixing punk, folk, and rock and roll into an incendiary cauldron of down-trodden emotion, battered dreams, and never-ending hopes, Rick Barton has crafted an album that has already shot to the top of my Top 10 list for 2011.  Recently Pope and I espoused the amazing punk/folk hybrid of Everybody Out! An offshoot from the famed Dropkick Murphys.  Yep, that was a Rick Barton project.  Well, it seems there’s just no end to the DM offshoots, nor the talent of Rick Barton.  Rick Barton got his start with the Murphys.  Co-founder and guitarist in fact.  Add to that a band with former members of Amazing Royal Crowns, the Del Fuegos, and the Swinging Steaks and we off and running down a road to punk folk heaven.

I knew I was in good hands from the first few seconds of opening track “No Place Like Home.”  Above the resounding strum of an acoustic guitar, Rick Barton’s weathered and tatty voice sings out “I will be your worn out shoe, that’s covered far too many miles.”  The band kicks in behind him with chiming guitars reminiscent of a folkier U2 with a rootsy edge.  And right away you can tell this is no ordinary love song.   This is a song of blunt honesty and human frailty.  Of human survival.  And as the female backing singers join in as Barton belts out the chorus, “We’ll fall right into each others arms/and pretend everything's ok,” I can feel the passion, the authenticity.  Barton really is that worn shoe that’s covered far too many miles.  His voice is a thing of brutal beauty, passion burning through those shredded and tired vocal chords.  This is a true American roots classic, brimming with punk vitality.  This modern day Johnny Cash, a little worse for the wear, but just as passionate, telling a tale of making it through each day.

“All Over,” fills the sound out even more, guitars jangling through the mix creating a moving wall of sound, cymbals crashing, bass pounding.  The band jumps into a faster vibe, particularly as the song whips itself into a fury for the closing.  That’s when it hits me; this is the closest I’ve ever heard to an American version of The Waterboys.  Those of you who remember Mike Scott’s band know what I’m talking about.   Folk and punk brought together in perfect symmetry, and the musicianship to carry it all off.  Loud and full, but real and honest.  “These Kids,” takes that energy and pushes it one step further.  Like Bruce Springsteen mixed with the Sex Pistols, chugging along at full speed, telling another tale of the streets and the fight for survival and trying to find something better.  Some life better.

Then comes “American Folk Song,” and boy, is it ever.  The first time I heard this song my jaw literally dropped.  I pulled the car over to the side of the road and just let it flow over me.  This song is a classic, a true American Gothic tale with a sinisterly mournful fiddle playing behind Barton’s acoustic and that plodding, woeful bass.  “We search for the truth but we only find questions which led us right back to our own point of view,” Barton sings as he reaches for his gun.  “The story was written on the day I was born,” he continues over the maudlin pace.  Until the chorus and all sorts of emotional hell breaks out.  Guitars rain down like thunder as Barton finds some level of passion in his voice that I couldn’t believe existed.   I had no choice, I simply had to let this song wash over me, sweep me up in its flow and carry me away.

“Lookin’ Out,” ups the Clash quotient and drops it right down onto the dirty streets of America.  “A Dime,” is a lost gothic treasure, as if Springsteen’s Nebraska album was reborn for round two.  Or better, as Barton sings, “Don’t fool around with my heart.  It may not be broken, but it sure isn’t sound.”  Yet through all the pain and weather-worn crags and cracks, I can’t help but believe that Barton has found a place where he clings to the brightness of hope.

And to me, that’s what this album is about.  Survival.  The strength to pick yourself back out of the gutter and let your past fall away.  Realizing that who we are is not the sum of our past decisions and mistakes, but who we choose to be in the moment. As painful as the past has been, the future hasn’t yet been written.  And its up to us to decide what that future will be.

Sure, I may be reading (listening) too much into this album.  But I don’t think so.  Barton is a true American storyteller, and his story holds true for me.