From The Breakaways to The Nerves to The Plimsouls to his solo career, Peter Case has always weaved a web of quality, roots based rock. The Case Files collects demos, out-takes, one live shot & other rarities from the 1985-2010 span of Case's solo career. Compiled by Peter himself, this long-overdue collection combines rockin’ full band electric tracks with a selection of dynamic acoustic performances, and also features collaborations with many of Peter's friends, such as Stan Ridgway, Eddie Muñoz, T-Bone Burnett, Ron Franklin and Tony Marsico, among others. As a collection of out-takes and rarities, expectations might be for a haphazard listen, but it's not.  Peter's muse is so cohesive, the songs all hang together to paint a picture of a true American troubadour. "(Give Me) One More Mile" is rousing, sparse back porch acoustic blues, with Peter's voice in amazing form.  This was an out-take?  Damn!  "Let's Turn Things Around" ups the funky quotient with it's rooster calls and washtub bass.  "Anything (Closing Credits)" sounds like a lost Plimsouls classic.  And it goes on from there.  Well, worth having.

While we're on the subject of The Nerves, we got a natural transition to discuss the latest power pop gem from the real "king of power pop" Paul Collins.  And with his pedigree in The Breakaways, The Nerves and the amazing Beat, no one can dispute his claim to the title.  King of Power Pop gives the Paul Collins fan just what they're clamoring for; sweet melodies, big, crunchy chords, sing-along-in-your-sleep choruses, and huge, huge I.V. infusions of power pop.  "C'mon Let's Go!" is two minutes of timeless pop perfection.  A perfect 16-karat melody and chorus propels this song from the early sixties to the modern day.  Paul's voice is in perfect form, roughening up nicely as time passes by.  "Do You Wanna Love Me," adds some rockabilly harmonica and beat to the mix, chugging out over another mean two-minutes of pop splendor.  Personally, I really dig, killer cuts like "Doing it for the Ladies" and the rockin' "Don't Blame Your Troubles on Me," which attacks with the ferocity of a vintage Beat song.  Power pop perfection. 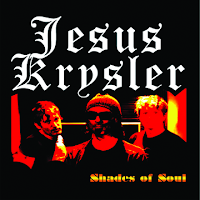 Power pop?  Yep, another perfect transition, this time to the darker, glammier, psychedelic-black-light-poster-in-the-garage pop stylings of Jesus Krysler.  Holy crap!  Where'd this disc come from?  Plopping this baby into the player and my ears were caressed, loved and fondled by the absolutely stunning "Walking in the Sun.", a fuzzed out, power pop, psychedelic treasure of the highest order.  Big heavy riffs layered in more fuzz than the carpet of a cat ladies hold-in shack.  Sweet and sugary, yet rough and garage-y vocals carry us to the big chorus with the urgency of a man rushing to the Emergency Room once he hits the 5th hour of a Viagra erection.  Like The Seeds shagging The Beat in the backseat of Baby Woodrose's '63 convertible Caddy.  Love it.  Simply love it.  The touch of female harmony vocals was genius to texture the song.  "Another Ride," roughs things up as it drags me along the pavement on the back of its scratchy riff and propulsive bass.  "The Roadie," adds a bit more sensitivity to the proceedings than I expected with it's sweet acoustic guitars telling the tale of woe on the road, while "All Alone," is as sweet as a Setting Son gem.  If these names wet your mucous membranes, check Jesus Krysler out, and prepare for the onslaught of mighty pop-punk mania that is "Cut My Brain."

Dirty Filthy Mugs - Up in the Downs

From acoustic blues to power pop to psych garage to . . . punk.  See's there's a natural madness to this grouping.  And after the mightier stylings of Jesus Krysler, my blood is getting ready to reach boil and to get there, I need me some punk.  But not just any punk.  As any reader of the Ripple knows, Pope and I have been jonsing on some pure chopping Oi! punk recently and to that end Dirty Filthy Mugs fits the bill perfectly.  More muscular than a fleet of cars coming from Detroit, DFM plug it out gravel-mouthed, methed-up, mean and nasty.  This is Oi! punk pouned out with a middle finger shoved knuckle-deep up your ass.  "Blocked and Smashed," is furious enough to cause the weak-hearted to cower in fear.  In reality, it's a faultlessly crafted fury of punk with enough nod to pop roots to keep the fists pumping and the nobs singing.  "Bodkin Downs" (from whence the album title derives) is a genius attack on a lock-up session at the mental hospital Bodkin Downs which the singer screams "made me insane."  Brilliant tongue-in-check, brass-knuckle to authority's head two-fisted punk with a killer gang chorus.  "You Want it All," never breaks long enough for the lead singer to draw a single breath over it's 1:16 attack span.  Brilliant.  Buy it.

Buy here: Up In The Downs

Lou Siffer and the Howling Demons - The Devil's Ride

Ok, we've done it.  We've gone punk.  Now there's no going back, especially not when Lou Siffer and the Howling Demons are in the garage, spewing exhaust, brimstone and demon breath.  Fuck this is the shit!  I'd already reviewed the single "The Mosher," but for those of you who haven't heard it yet, what're you waiting for?  This is 2:32 of V8 nitro-fueled muscle car garage punk that could blow the windows out of any non-reinforced spaces.  Coming from Sweden, Lou Siffer and his demons are just the latest musical threat to set sights on the free world with the intention of laying waste to all small nations in their path.  Think Ripple favorites Space Probe Taurus but with 4 wheels instead of two, and on those four wheels we got 455 hp, four-on-the-floor and an overhead blower that can suck the life out of pop pretenders.  "Love Song," is the second track.  Yeah, right.  "Love Song"?  More like "you left me, so get the fuck off the road" song.  Power, gritty, nasty, dirty chops just terrorize this masterpiece.  Add to this a vocal delivery that sounds to me like Elvis Presley after he ate Johnny Rotten with his peanut butter sandwiches and we got the fucking-kick-ass album of the year.  Bring me more Lou Siffer.  Bring me more Howling Demons.  Plow me down on the punk asphalt of life, baby.  I'm begging for more.

Lou Siffer and the Howling Demons