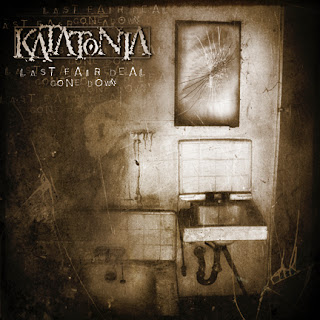 Y’know, it’s funny to me that I can have albums sitting in my collection for months, nay . . . years, before I recognize their brilliance. Waveriders, I have a hidden gem for you, specifically if you like your music dark, moody, and dipped in a healthy coating of depression, and draped in a heavy layer of gothic fabric. Katatonia’s Last Fair Deal Gone Down has been in my collection for a few years by now, though originally released in 2001 through Peaceville, and for some unknown reason, it didn’t immediately resonate with me. Maybe I was too happy when I received it, maybe my life was too good and shining with optimism. That’s not to say that my life has changed all that much now, but there is an air of uncertainty surrounding me these days that makes my perspective a little on the darker side. So . . . maybe that’s why this album suddenly makes sense to me, why Last Fair Deal Gone Down has inexplicably spoken to me more than the cheery and shimmering hits of the summer. I don’t know . . . it’s always a mystery. That’s one of the reasons I write these things!
For those not in the know, I stumbled on Katatonia a number of years back with the release of their impeccable Viva Emptiness album, an album filled with such darkness and somber violent intent that I fell in love with the band and haven’t looked back. The band’s music has depressive tones to it and there are many times that I imagine a cartoonish storm cloud lingering over my head threatening to douse me in cold rain. The emotions are turbulent, the mood dampened, however, tucked somewhere in these dreary tunes is this wandering ray of hope that we, as human beings, must cling to if we have any inclination to return to a world of sanity. The musicianship, especially in the guitar work, has an effervescence to it, in that, one guitar will lay down a foundation of sustained distortion while the second guitar comes along and adds flourishes of single note texture that creates a sweeping contrast of mood. In the meantime, the rhythm section holds a steady circling pattern for the guitars to work their magic. Oh . . . and let’s not forget the vocal work of Jonas Renkse . . . otherworldly. The man has a way of conveying his despondency that sends chills through my being.

Ultimately, I think what makes Last Fair Deal Gone Down work so well is the way the band crafts their songs with a combination of compelling melodies and heavily aggressive rock. Face it, without the haunting melodies, the songs would come across as one dimensional. “We Must Bury You” starts off with this morbid tale about the protagonist kicking the crap, and ultimately the life, out of somebody. Dark, right? But the lyrics that make up the verses don’t carry the emotional impact without the melodic chorus and the plaintive croon from Renkse as he recites, “We must bury you” . . . almost with a sense of panic, a need to hide the crime of the murder. One can almost imagine the scenario as this group of guys are standing over a broken and beaten body, not so much speaking the words, but communicating with their eyes and thoughts that the body must be disposed . . . somehow. And then, the second verse and the remorse, the begging for forgiveness . . . fuck! Dark and powerful! Follow that song with “Teargas” and Christ! Tracks three and four are an emotional rollercoaster! That sudden burst from the band as the guitars lay down a texture passage through the darkness . . . the sheer intensity that suddenly evaporates into the Renkse led vocal work. I love how his voice steadily gets stronger through the verses and then, by the time we get to the chorus, explodes into a haunting melody of sadness and personal tragedy of love lost.
“Tonight’s Music” is pure dark magic! The soft guitar work that opens the track is so fragile and is reflected by the vocals as they creep into the mix . . . like Renkse is well aware that if his vocals were any louder that the riff would be damaged. What Katatonia do probably better than any other collection of songwriters is they balance the light moments with dramatic movements of heaviness, and this song is a perfect example of that. The verses are so fragile, so vulnerable, but then it’s like the cracks suddenly begin to appear and spider web across the mind’s eye as the chorus erupts. So filled with passion and emotion, so vibrant and charismatically expressive. But, that’s not to say that the band can’t rock out heavily throughout a track either. “Clean Today” is a heavy guitar driven psychotic breakdown waiting to happen. Bitchin’ drum work, elaborate guitar textures, and vocals that are more filled with confidence, one of the lone moments where the sun seems to want to break through the dense fog rather than submit to its captivity within the clouds of despair.

“The Future of Speech” is one of those dramatic moments in rock sound where the keyboard textures create wondrous soundscapes for the guitars, bass, and drums to wreak their havoc. The vocals are superb throughout . . . evoking physical reactions and that voice! Man . . . just beautiful! Then there’s Passing Bird” . . . I’m not even sure what to say about this track. It’s just one of those songs you have to hear, and then it’ll become a part of you. You’ll sing about the girl with the black hair and the black dress. The vocal works is fantastic and something that you’ll have to key into, not because you necessarily want to but because you’ll be forced to. The power of the vocals allows the guitars to play a more subtle roll, but then . . . then they explode and surprise the hell out of you coz’ they just seemed to linger in the shadows. Almost like you forgot they were in the song because you were so keyed in on the lyrics and the melody, but when they do jump out of those shadows, there’s no forgetting them. It’s that complimentary roll that all of the instruments play with one another that keeps the music ultimately interesting.
Every song on Last Fair Deal Gone Down is a keeper, there’s not a throw away track on the album. If you’re one of those new found Katatonia fans and you’ve been on the fence about this album for any reason, please . . . I hope my words will suffice as a fair assessment that you should have very little to no doubt that this record will be a welcome addition to your life. I don’t necessarily think that you need to be in some dark place to get this album, to truly understand it . . . you simply need to have a greater understanding of your own emotions. The songs are crafted around the listener and their ability to feel, and each song has the ability to move the listener to tears, send the listener to an inner place of reflection. For those hoping for more a hard rockin’ album, eh . . . Last Fair Deal Gone Down doesn’t rock in the traditional heavy metal sense, however, that’s not to say it’s not heavy. It’s texturally heavy, it’s emotionally heavy, it’s not necessarily sonically heavy. Again, really wish I had found this album earlier in my life. It’s too good to go through life without.
Of final note, apparently this is the 10 year anniversary of the albums original release, so you should be able to find a deluxe re-issue package of the album here, there, or wherever. Sage advice: Go out and buy it.
--Pope
Buy here: Last Fair Deal Gone Down

Unknown said…
Great album indeed! I remember I was really happy when I listened to it for the first time. It was at the beginning of Summer and it still grew on me. I can't really say which one of their albums is my favourite because they all are masterpieces of modern rock! They have recently played at Kavarna Rock Fest and I will never forget their performance. It was sunset and many people didn't like that but for me it was just Katatonia playing while the sun was dying. Awesome!
July 24, 2011 at 3:00 AM