Despise You / Agoraphobic Nosebleed - And On And On... - Split 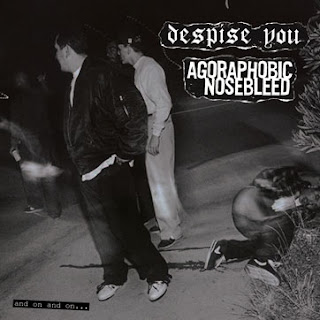 It's been a long time since a split CD has really caught my attention and made me want to continue to listen to it over and over. Back in the day some of my favorite splits were: At The Drive-In / Sunshine, Alkaline Trio / Hot Water Music, Pig Destroyer / Gnob, Napalm Death / S.O.B. and Agoraphobic Nosebleed / Kill The Client, just to name a few. So, it has really been a good number of years that I have heard a good split album. This year I have found a split worth worthy of a review and it is the Despise You / Agoraphobic Nosebleed split entitled And On And On....

For those who have read my past reviews, you know I love Powerviolence bands. Love 'em! Despise You are one of the most legendary bands in that scene. With this release, it marks the first new material from the band in 10 years! Needles to say I was super stoked to hear some new stuff. Despise You kickoff this 25 track split with the song “Berefet”. This song reminds me of old hardcore pioneers, Black Flag. This song clocks in at under just 40 seconds.

Despise You do a pretty amazing cover of Fear's “I Don't Care About You”, which on the album is just titled “Fear's Song”. Despise You make this song even angrier than the original and if my ears don't deceive me, it's a bit faster as well. This is a perfect cover. It holds true to it's early Hardcore roots but ads a twist of Powerviloence's anger. This song is still relevant after all these years. With lyrics such as:

“I see man rollin' drunks,
bodies the streets.
Some man was sleepin' in puke
and a man with no legs crawling down 5th street trying to get something to eat!

Despise You knock out their 18 tracks in under 17 minutes. Is it good? Fuck yeah, it's good.

Agoraphobic Nosebleed are one of the premier Grindcore bands out there. They have been ahead of the Grindcore curve since the early 90's. Wow I just made myself feel old thinking that I have been listening to this bands since around 1998. Time flies by when you're listening to brutally fast Grindcore.

Agoraphobic Nosebleed keep the party going for the last 7 tracks. They start things off with the track, “Half Dead”. This is one of the longer tracks on the album clocking in at an astounding 4:39. This track begins where Despise You left off. With a sludgy and dirty sounding guitar. Vocally this track is epic. Lots of yelling and doomish vocals.

“No fit to live anywhere
With anyone I'd have any desire
Make a career out of apology
For a maid's wage, same day hire

The commute is hell, the coffee cold
If you worked here you'd already be home
Half man, half dead, half asleep at the wheel
Fuckin' as good as dead, drunk behind the wheel”


“Possession” is one of my favorite tracks on the album. It's played super fast and fells punk laden. The Punk aspects I'm talking about are the way you are able to understand the lyrics fairly clearly. The lyrics of this song speak of prostitution, I can't wait to go to a show and scream these vocals with Jay Randall.

The shit you just stepped in is on you 'till death”
And On And On... is an awesome split. Hopefully I get a chance to see either one of them live this year. If you love brutal music as much as I do pick up this split. Agoraphobic Nosebleed and Despise You are bands you need to know about.