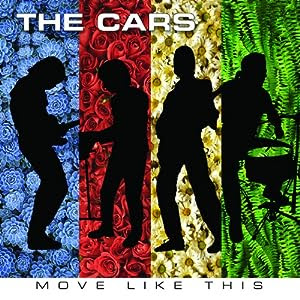 Ok, a little overdone, for sure, but it must take some sort of disruption of Einstein’s physics and understanding of time and space to understand how – 24 years after recording their last album and 11 years since losing the essential Benjamin Orr—The Cars managed to leapfrog to 2011 as if time had never passed.

There’s been lots of reformations recently – The Pixies, Devo, Smashing Pumpkins to name a few—but none have made that reformation sound nearly as easy and definitely as necessary--dare I say essential--as the Cars.  Move Like This doesn’t sound like a good old Cars album.  It doesn’t sound like a band jumping back and trying to recapture their lost sound.  This isn’t a retread or last stab for glory.  Move Like This is simply a killer pop-rock record that picks up right where the boys left off with Heartbeat City.  Back in the day, The Cars truly were the most accomplished, most successful, and best of the new wave pop bands, unleashing hit after hit from their first five albums.  And everything I loved about The Cars is here on Move Like This, fresh and invigorated and ready to take it’s place on the mantle with the best of The Cars work.

Simply put, Move Like This is essential Cars.  There, I said it.

Forget the Todd Rundgren led New Cars, these are the real boys.  Ric Ocasek unleashes another furious set of instantly memorable pop anthems.  Elliot Easton brings in the textures with his animated, hook-infused guitar work, David Robinson keeps the train running right on time, and the indispensable Greg Hawkes continues to demonstrate just how vital he is to the trademark that is The Cars sound.

“Blue Tip,” kicks things off with its quirky keyboard runs and catchy-as-hell beat.  Ocasek’s voice is in fine form, off-kilter, hesitant and nuanced as ever.  Hawkes has a field day laying down the big fills as the song motors towards its hook of a chorus.   The production, whether here by Jackknife Lee or elsewhere by The Cars, is spot on, giving the song a huge, timeless sound, full of The Cars characteristic stylish throb. This is pure Cars. A lost hit from the Shake it Up album perhaps? A top hit today?  It’s all the same.

No one can write of this album without mention of Ben Orr.  He was a huge part of the band, both as founding member with Ocasek as well as musician.  His tasteful bass played perfectly around Ocasek’s stuttering compositions.  Since Orr shared lead vocal duties with Ocasek and sang with the same stammering cadence as Ocasek, it took me years to be able to tell the difference in their two voices.  Then I read an interview with Ocasek and it all made sense when he said that Orr sang the romantic songs while Ocasek sang the neurotic ones.  So it was Ben’s voice that graced the most beautiful of The Cars tracks, like “Drive” or the smooth glide of “Let’s Go.”

While the band does an admirable job of carrying on without Orr, it has to be said that his presence is missed.  Second song “Too Late,” with its gentle keys and glossy melody is the natural successor to “Drive.”  Ocasek does a fine job with the vocals, but anyone who knows the band knows that this would’ve been an Orr song, his perfect tenor breezing smoothly through the melody, draping over the hooks.  Adding that romance that only Orr could.   In the liner notes, the band dedicates the album to Orr, saying “Ben, your spirit was with us on this one.”  And it was.

“Keep on Knocking,” is perhaps the heaviest Cars song ever, ranking right up there with "Down Boys.".  Deep and shadowy, this sounds like something that could’ve come from their lost, darkened masterpiece Panorama.  Easton sounds like he’s having a ball, laying down some thick chords, his fingers squeaking across the strings and Ocasek’s in fine form, his vocals eccentric as ever.  “Soon” is another Orr-inspired ballad of uncommon beauty while “Sad Song” brings back the sputtering guitar intro of the classic first album found on songs like “Best Friend’s Girl” and “Let the Good Times Roll.”   “Free” moves and pulses with the best of em.  “Hit’s Me,” stumbles out of the starting gate like many classic Cars compositions before picking up the pace down the back stretch for a true winner.

Despite the references to past hits, Move Like This doesn’t ape any of them.  It merely uses the past as a launching pad to fire off some tasty modern, quirky, purely-Cars pop rock.  Space and time continue to exist, and Einstein hasn’t been proven wrong, but somehow The Cars have made the unlikeliest of reunions seem as natural as time marching on.  This isn’t just a great modern new wave album, it’s a great Cars album.

Of this or any other time.