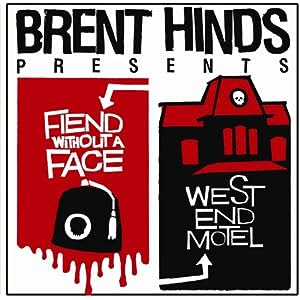 . . .Continued From Fiend Without A Face

With grave concern quickly taking up all of my conscious thoughts, I gently spurred my horse into a slow trot.  We made our way down the wide, dirt packed street towards our ultimate destination, the West End Motel.  It was there that The Fiend had retired after quitting the train, and it was there I would confront him (or her for that matter).  During my approach to the Motel I watched the main entrance carefully to ensure that no unknown persons left the premises.  My heart skipped a few beats when a man stumbled out the door, but thankfully I was able to quickly identify him as the town drunk; a.k.a. not the person I was hunting.

When I arrived in front of the Motel I dismounted from my horse and tied his reins to the nearest hitching post.  Being a creature of habit I took out my pistol to make sure that it was loaded and that the firing mechanism was clean of debris.  With that done I holstered my weapon, realigned my badge to foster maximum visibility, and took a couple of deep, drawn out breaths to steady my nerves.  A few moments later I was as calm as I could be prior to a confrontation, and I strode through the Motel entrance with a look of grim determination on my face.

The entrance immediately gave way to a spacious lobby which was fairly crowded with guests.  Idle chatter noticeably died down after my presence became known, and the regulars shot nervous glances my way.  Hoping to still have some element of surprise on my side I strode over to the stairway at the back of the lobby, climbed up a few steps, and rapped the butt of my pistol against the banister to call attention to myself.  With all eyes on me and the closest thing to silence anyone could ask for, I got down to business.

“Good evening ladies and gentlemen.  For those of you who don’t know me, my name is Penfold.  I’m the sheriff of this town, and I’m here today on some very important business.”
Just as I finished my last sentence a sharply dressed, well-groomed man stood up from a table in the center of the lobby.  “Sheriff Penfold.  If I may interrupt, I believe that you are looking for me.”
“Really?  What would make you believe that sir?”
He chuckled slightly and casually lifted his right hand to obscure his lower face for a moment.  “Oh, just a hunch is all.”
“You know what, I think you’re right.”  I raised my voice, “Ladies and gentlemen.  I apologize for the inconvenience, but I’m going to need ya’ll to vacate the premises.  I need to speak with this man in private.”
A random guest seemed incredulous.  “Sheriff you can’t be serious?!?”
My only response was to cock my pistol.  That certainly got the message across, as everyone but my quarry hastily exited the Motel.

The man now holding my undivided attention began half-heartedly clapping.  “Bravo Sheriff!  Bravo.  Very well done, but don’t you think that was a bit excessive?”
“Not at all sir.  Or would you prefer that I call you ‘The Fiend’?”
“Gary will suffice.  Mind if I call you Pen?”
“Whatever floats your boat, Gary.”
“So what happens now Pen?”
“First you offer me some proof that you are in fact ‘The Fiend’.”
“Fair enough.  How about this?”  He took a small pouch out of his coat pocket and tossed it to me.  The pouch contained several gold coins of the variety that had been stolen by ‘The Fiend’ a month ago.  “Satisfied?”
“Yes indeed.  Now tell me what you’re doing in my town Gary.”
“Well Pen, the life of a highwayman is rather taxing.  I need a break from the routine.  I need a vacation.  You know…some time to kick my feet up and relax.  Luckily I found out about your town; a place on the outskirts of civilization that’s outside the reach of all those big city lawmen trying to track me down.”
“Aren’t you forgetting about small town sheriffs like me?”
“Not at all Pen.  I’ve been told that you are a reasonable man.  I propose that you just leave me be for the next month.  You have my assurance that I will cause no trouble in your town while I’m here.  At the end of the month, I’ll leave and you’ll never see me again.”
“Why should I consent to consciously harboring a known fugitive?”
“That pouch in your hand has more money in it than you’ll make in a year, maybe two.  If you let me stay here, all that money is yours.”
“Are you offering me a bribe Gary?”
He gave me a big smile.  “You could say that Pen.”
“I thought so.”  I tossed the pouch back to him.  Just when he made the catch, I shot him.  The Fiend fell backwards onto the floor, clutching his left shoulder where the bullet had entered his body.  Casually, I approached the fallen villain.  When I was standing over him I made eye contact.  “Two things Gary.  One: only my friends get to call me Pen.  And two: I hate bribery.  Besides, I’ll have money to burn once I collect the reward on your head.”

Hello there waveriders.  I’m oh so glad you could join me today.  If you were kind enough to stick around for the conclusion of this two-part review, thank you.  If that last sentence means nothing to you than do yourself a favor, go back and look up part one of this review covering Fiend Without A Face.  Not only will you discover some fantastically interesting tunes, but the storyline you just finished reading will actually make sense given the proper introduction.  Finished?  All right, let’s get on to the good stuff!

Have you ever sat down and thought about most established artist’s side projects?  Go ahead, take a moment.  I’ll wait.  I’m guessing that the more you thought about it, the more often you arrived at the same conclusion.  The side projects sound either very similar, or disturbingly identical to the artist’s main musical outlet.  If you like the artist you probably like the side project.  If you don’t like the primary band, odds are that the side project won’t do anything for you either.  But hold on!  Let’s retrace our steps.  Yes the majority of side projects tread a well established line, but there are others that don’t play it safe and really take a walk on the wild side.  West End Motel is definitely one of the wild ones, and I’m going to show you where the wild things are.

Brent Hinds plays guitar and sings in Mastodon.  You know…the widely successful heavy metal band that has put out some killer records over the past few years.  You might have heard of them.  Brent Hinds plays guitar and sings (backup outside of one song in which he sings lead) in West End Motel.  West End Motel is one of Brent Hinds’ side projects.  Now let me make something abundantly clear.  West End Motel – Is – Not – Mastodon!!  In fact, I’m one hundred percent positive that you would never connect the two without assistance.  Why is that you ask?  I’ll tell you.  Mastodon plays heavy metal.  West End Motel plays mid-to-down tempo country music with punk ethos.  That’s right…country music with foot-stomping attitude.  Didn’t see that one coming did ya?  I know I didn’t.

The musical proceedings get started with the flouncy strut of “…And We Are Here To Entertain You”.  Yes you are my good men.  Yes you are.  The listener is struck immediately by the earthiness of Tom Cheshire’s vocals.  He’s not aiming for the stratosphere folks.  He’s channeling the everyman and tapping into all the emotion that accompanies him.  No song disappoints, but a couple of the other tracks stand out to my ears.  The more rock-ish “I Like It A Lot” features melody lines that haunt my dreams, “She’s On Fire” has some truly fantastic guitar work from Mr. Hinds, and album closer “Highwaters” is utterly captivating in every way imaginable.  Vocals, guitar, rhythm section, hummable choruses; you name it, it’s here in spades.

I only have one real complaint with this album.  At twenty three and one half minutes it is too short to fulfill my demands.  After the album ends I’m left wanting every time.  I need more!  Some people might dispute this point and use my own argument against me, saying that the album is the perfect length because it produces insatiable desire for the band’s next release.  Touché my friends.  Touché.  To quote a famous person, “That means you’re wrong right?”  West End Motel.  Get it now!