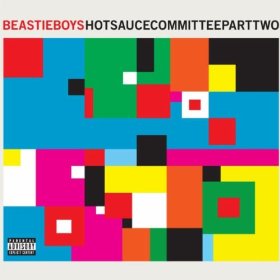 Hey Waiveriders! Normally I'm not known for reviewing Hip Hop albums but hell, I'm probably the only one who is gonna review the new Beastie Boys album. I'm sure you are all asking the question, “Why the hell isn't Penfold reviewing Hot Sauce Committee Part Two?”. The answer is simple, Penfold fucking HATES those dudes. Don't get me wrong, this new Beastie Boys record is right down Penfold's alley. Musically and lyrically he would love this album. However, his hatred for the Beastie Boys overtakes any musical bliss he would receive from this record. I'm sure you are wondering why Penfold despises is them so much. My friends, this is a story that is way to long to write up about and would be better told on the Ripple Radio Show by Penfold himself. Let's just say if Penfold ever saw Mike D or any one of the Beastie Boys we would begin receiving his write ups from the local or possibly federal prison. Do you have any idea how hard it is to get digital promos to man on the inside?? It's tough! Now on to the music.

Hot Sauce Committee Part Two is one hell of a long album and the album title is just as long. We begin our journey with the the most recent single, “Make Some Noise”. These guys still have “it”. This track is tremendously entertaining. Even the video for this single is awesome. It almost seems like the older they get they better they get. I think MCA says it best in his opening lyrical spit:

“I burn the competition like a flamethrower
My rhymes age like wine as I get older
I'm getting bolder, competition is waning
I got the feeling and assume the lane”


Another stand out track is, “Too Many Rappers”, featuring one of my favorite emcees in Nas. Pretty classic sounding Beastie Boys track. Nas' flow adds a little something to this record. You can't deny losing yourself in this track and just taking it all in. This is my favorite lyrical flow:

“Cuz this the type of lyric goes inside your brain
To blow you bullshit rappers straight out the frame
My lyrics spin round like a hurricane twister
So get your hologram on off of Wolf Blitzer
Too many rappers to shake a stick at
I oughta charge a tax for every weak rap
I had to listen to, ‘cuz we be makin’ stacks
Like Stax records
My squad we gotta pack
We never coming wack”


Lastly, I'll touch on the track “Lee Majors Come Again”. This track you can really here the usage of actual drums and instruments. You can hear it on a couple of other tracks too but this is really where they stand out. In case you forgot these guys used to be in the late 80's puck scene. They used to open up for bands like, Bad Brains,The Dead Kennedys, The Misfits and hell even Reagan Youth. So, these guys really can play and don't always need to produced mix behind them. My favorite part of this song is the opening flow.

“I’m the lyrical, mathematical genius
Splashin' like lime juice
You never seen this
Internationally known
The longest to lead us
Shout out the one
How’s gonna lead us?
Hit’em with the rhyme
But the rhyme don’t stop
We got the beat
And the beat gonna drop
The beat …. Go pop
Now take a look around
And ….”


If you are a Beastie Boys fan and have yet to pick up Hot Sauce Committee Part Two, go get it! As for Penfold's story of Beastie Boys hatred, that is for another time. The story is great maybe you will be able to hear it one day....maybe.