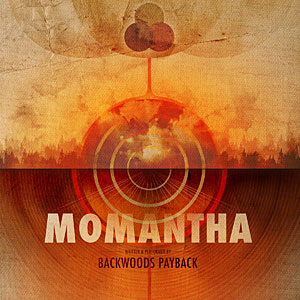 For many years I thought I was the only one who remembered Kinghorse, the obnoxious band from Louisville who blended Black Flag/Misfits hardcore with Black Sabbath and The Damned during the early 1990’s. When my band had the pleasure of sharing the stage with Backwoods Payback it turned out that singer/guitarist Mike Cummings was a fan, too. The shadow of Kinghorse looms large over the new Backwoods album for me since it combines several styles of heavy music I love into one hot n nasty rip ride. There’s a strong Misfits/Samhain/Danzig influence for sure and Mike’s howling vocals bring to mind Glenn (Anzalone) Danzig as well as Sean Garrison’s powerful screaming with Kinghorse. There’s also a lot of post-My War Black Flag mixed with Sabbath spawns Trouble and Kyuss. Diversity is always a good thing as long as it’s heavy. And loud.

Momantha is a helluva album. So was their 2007 self titled debut but this new one is a major leap forward. The songwriting shows off many more layers, the musicianship is tighter and the production is much improved. The guitars of Mike Cummings and Rylan Caspar are heavy and crunchy but never get mushy sounding. Jessica Baker’s probably got the 10-and-a-half in this band based on her ballsy bass tone and W.S. Curtiss murders his drums to form a very tight and in the pocket rhythm section.

Opening song “You Know How This Works” begins with the sound of a guitar throwing up, then the drums come in and an almost happy sounding riff starts up. The mood changes once the vocals start “I’ve got no one on my side, what the fuck else is new?” The negative vibes continue with “Flight Pony” an excellent “Hole In The Sky” style stomper. “Knock Wood” and “Mr. Snowflake” are mid-tempo ragers with tortured vocals and some nice melodic lead guitar fills.

The middle of the album has a bunch of mid-tempo heavy rockers like “Parting Words,” “Lord Chesterfield” and “Velcro” that maintain their groove from start to finish but will keep you amped up behind the steering wheel without getting a speeding ticket. “Velcro” is the longest cut on the album (just under 6 minutes) and contains positive thoughts like “if I had a gun I’d clean it everyday to keep it in its finest working shape.” Things speed up and get really pissed off on “Timegrinder.” This one really reminds me of Kinghorse at their most furious with an early C.O.C. intervention. Album closer “Ballad Of A Broken Horse” is kind of a summary of the entire album. Parts are fast, parts are slow, there’s some Sabbath (maybe even from Born Again!) and the thing flat out rocks.

Backwoods Payback has come up with a real winner with Momantha, one of the better heavy music releases so far this year. As good as the album is I’m sure all of the songs will be even better live. If you’ve never seen Backwoods Payback before you’re in for a real treat. They will play at just about any dump that will have them and they always go insane even if there’s only one person in the crowd. As a matter of fact, I think they go even more insane when there are fewer people. They’re also some of the coolest people you’ll ever meet. Whether you’re a new friend or old they will always offer to take you out to their van and share their Wild Turkey with you. I’ve had the hangovers to prove it. The album is currently available on itunes and physical CD’s will be available shortly. Don’t snooze on this one, mutha!