Gangstagrass (featuring T.O.N.E.-Z) - Lightning on the Strings, Thunder on the Mic 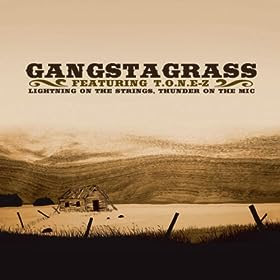 I just wanna know how the conversation went down.

There you had it; one fine bluegrass band, guitar, fiddle, resonator guitar, banjo and bass on hand, just hanging out in the studio one day with a jug of moonshine and some hayseed, when the guitarist looked over to the banjo player and said, “You know what we’re missing here?”

“No, what?” the banjo player must've replied,  “Harmonica?  Washboard?”

“No,” the guitarist stated, slinging his six-string over his shoulder.  “What this bluegrass jam really needs to take off is a hot-ass rapper and some dope DJ spinning the tables.”

You’d have to think something like that happened because the thought of gangster rap mixed with real-trad bluegrass is about as incongruent as the London Philharmonic playing on the infield of NASCAR.  Just shouldn’t happen.

But it did, and damn if this isn’t one of my favorite discs of the year.  Just try and get it out of my car player.  Heavy in beat, twangy in tone, Gangstagrass manages to take the best of both worlds and pull em together as if they’d always been meant to be there.  Think of this as music from inner city Memphis, or downtown Birmingham.  Whatever.  It works.

In truth, the combination probably came a lot more naturally than my made up conversation  Mastermind Rench is a guitarist, songwriter, and producer from Brooklyn already entrenched in the honky tonk and trip hop worlds.  All he did was pull together what he does best, find some like minded folk and get one funky breakbeat going on down at the old farmhouse.   And let me tell you, the results are brilliant.  Dirty and country dusty hip hop.

Let’s forget the beats for a moment.  This is hardcore ‘grass.  Guitars picking and strumming, banjo twangy, resonator guitar filling the spaces, and that great fiddle just wailing over it all.  Each of these cats can play and mesh perfectly together as a unit.  Each player aims to fill out the music, not overwhelm it.  Filling in some tasty fills, backing off for the fiddle to run high and low.   It all works.

Now the beats.   With Prepmode on the turntables, plus Rench programming some beats, we got lots of room for T.O.N.E-Z to play in.  And play he does.  With a crisp pace and clear tone, T.O.N.E-Z unleashes one tale of urban struggle after another.  Nice and fluid, his raps pack power and clarity.  Not just senseless boasting or ‘ho busting here, Gangstagrass ain’t afraid to take on politics and strife.

And the album kills it right from the get go.  “That’s Right I’m Good,” rides a swinging fiddle melody over some twangy guitar as the beats hit hard from second one.   This ain’t a political one, this is pure on rap boasting, setting the stage for the album to follow.  T.O.N.E-Z makes his case as being the best rapper around and as the band tears the roof off the barn behind him, it’s impossible to argue.  Yeah, it’s rap.  Yeah, it’s bluegrass.  But together there’s just something authentic about it all, just real and honest, foot stomping party music.  The band getting down.  The rapper hitting his flow.  Hell, yeah.

“I’m Gonna Put You Down,” is even heavier, with its spartan beat over that loose strung guitar.  Here, the fiddle comes on like a mourner at a funeral, laying down the atmosphere, and really hits me with its mood and tone.  This is pure gangsta here, praising and hating the hood in the same breath.  And it all resonates, each beat bringing that gritty reality to the rap.  And when the chorus kicks in with the cowboy-blues vocals, it’s a moment of brilliance.  “Dig a hole, dig a hole in the meadow.  Dig a hole, dig a hole in the cold, cold ground, I’m gonna put you down.”  Urban gangster meeting old school cowboy.  Brand new but aged and weathered, like a ridden hard and cracked leather saddle.  Somehow, it all works.

Other standout tracks are the bust-up-a-bar-and-break-your-face-with-brass-knuckle Harley rap of “I Go Hard.”  Really dig the contrast of the fluid rap with the more languid old-country chorus vocals.  “Big Branch,” also deserves mention, first because Tomasia takes over the rap from T.O.N.E-Z, but mainly for the story she weaves of life in the coal mining towns of West Virginia, black lung, death in the mine, and blowing your hands off in a meth lab.  Powerful.

What makes the album work so flawlessly is the blend.  Neither the rap nor the bluegrass take over, they simply mesh perfectly creating a cowboy-outlaw rap that’s not like anything I’d heard before.  It’ ain’t hard rock, but it still will make my Top 10 for the year.  If you dig outlaw country, dusty gritty bars, southern rock and some massive beats, don’t miss this.  It really is lightning on the strings and thunder on the mic.

great review and absolutely in my top 5 discs of the year!