Been Obscene - The Magic Table Dance 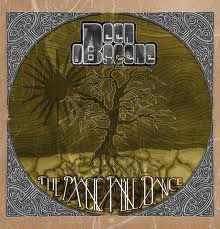 I’d like to start this review with an apology to Been Obscene . . . and to Elektrohasch . . . and to my cohorts in cohorts in crime at The Ripple Effect. You see, I’ve had this Been Obscene album topping my stack of CD’s for easily six months and it constantly got shifted from one side of my desk to my car stereo, back to some other corner of my desk, then back to my car again, and so on, such forth, etc, etc. The Magic Table Dance didn’t deserve such poor treatment. In retrospect, this album should have immediately had glowing words penned about its existence, exalted for its musical exuberance, revered by yours truly. But for some reason, I decided that it was best to let the sonic 70’s splendor represented on this disc to ferment within the very cells that make up my being for a good long time. In many ways, I’m glad that I’m just now getting to writing about this record. It’s passed the test of a fairly great amount of time and the luster hasn’t dulled in the least . . . in fact, it may have actually grown in radiance!
I don’t know a whole lot about the band in terms of how long they’ve been around or what their musical intent is or what their favorite flavor of ice cream is, and I can only draw from the music that makes up The Magic Table Dance. From what I hear, Been Obscene is a band that channels the best moments of 70’s-era Deep Purple, Jethro Tull, maybe a little Sabbath . . . basically, anything that sounds like it originally came from the early 1970’s rock arena without sounding like anyone particular band . . . and mixed it with a modern rock sensibility to make the whole sound relevant for today’s fickle rock n’ roll ear. More concerned with letting the music do the talking, the songs on The Magic Table Dance have a strong instrumental focus, however when the vocals set in, the melodies are rich and memorable. The music ranges from psychedelic and airy to borderline proto-metal and then ventures in to heavily progressive and epic movements, and all done with these great guitar tones that teleport the listener to that bygone era that has the Ripple staff reaching for their rattles and pacifiers.

Opening with the five-plus minute instrumental title track, Been Obscene teach us a lesson on song craft, slowly building the tension measure by measure, infusing lines of guitar melodies that will have you humming yourselves to sleep. The musicianship throughout the song (and album) is top notch, all members playing to their individual strengths, complimenting the other musicians as well as the song, and when their individual abilities need to shine, there soon becomes no question that these cats can chop away with the best of them. “Uniform” kicks in shortly after the opening mind fuck and the subsequent riffology has that awe striking ability to it. Y’know that moment when you sit a little further back into your chair, raise your head from your desk and gaze into some far and distant land and think, “Fuck. I get it.” The first minute or so of the song has a great and dense guitar riff crunching away while the fill laden drum pattern keeps flawless time, but then the riffs take center stage and crush the air from the song, creating a massive wave of tension. Just as quickly as the air is crushed from the space between the notes, this talented group of musicians open things up again and slow the pace down, letting the notes breathe over the steady throbbing grove of the rhythm section. And it only gets better once the vocals drop into the mix . . . soft, clear, a touch fragile, yet laced with an undercurrent of danger. In a word, memorable. In another, remarkable.
The band get a little psychedelically creepy with “Come Over”, complete with a riff that dangles in the air like a dusty cobweb in an old mansion. A little on the Sabbath-y side, but you have to dig deep into the Sabbath catalog to find the sounds. The groove is slow and sure, like a cat stalking its prey. The vocals are all sorts of bad ass . . . a little blues-y, a little jazz-y, a whole bunch of bad ass. Getting towards the midpoint of the track, the guitars open up to the same sultry bass groove and the wall of distortion assails us. This is the point where the individual performances of the various musicians shine like a thousand suns. Everybody excels well past the point where I would have expected in the song. In most cases, at this point of a song, the guitarist or the drummer is the lone stand out . . . going into some superfluous solo that really doesn’t add anything to the overall feel of the song. In the case of “Come Over”, every member of the band, every instruments suddenly pops out from the background like some weird sonic 3D image and fascinates the senses . . . never overplaying their parts, but never staying mundane or playing the same lick twice. Progressive, yet accessible . . . melodic and memorable, yet mentally challenging for the listener and the artist at the same time.

The near fourteen minute progressive epic “Demons” could easily been cast aside by the unknowing as a pretentious piece of music, but I say nay. The song is an ambitious piece of music that does what music should be doing . . . entertaining, telling a story, challenging the listener to think of music as something more than a three minute radio friendly chart topper. Thank you, Been Obscene. Thank you for breaking the mold and taking me on a journey that is more than a bunch of disjointed riffs haplessly strung together to eat up a quarter hour of my time. “Demons”, in now traditional Been Obscene fashion, builds note up note, then measure upon measure, idea upon brilliant musical idea, ultimately creating a well thought out and emotionally charged piece of music. In a classic prog-rock manner, the song ebbs and flows, hits its crescendos and then drops back down to subtlety, and then becomes raucous again. The middle explosion of sound, though loud and distorted, is filled with beautiful vocal melodies that somehow compliments and contrasts against the chaotic musical frenzy of the instruments. Pay attention to the guitar work towards as we barrel into the last quarter of the song, then while one is keyed in on this performance, adjust your listening just a hair to the drum work . . . I love the way these guys work together and great such a vibrant piece of sound. Pure art!
I apologized earlier, and I apologize again. I should have written about this album months ago. It should have joined label mates Hypnos 69 and been in my Top 10 list of 2010. Shoulda’, woulda’, coulda’. The Magic Table Dance is a criminally underappreciated album despite its rave reviews. It’s an album that grows with every subsequent listen, it develops into its own character and almost becomes a different experience with every new spinning. Steeped in the 70’s rock cup of tea, the sounds are familiar, but not overtly recognizable. The songs are so damn good that for those remotely interested in songwriting, you’ll sit in wonder as you listen to this group of fine musicians relay their musical ideas. Looks like I need to make another trip to the Elektrohasch Store and see about picking up this gem on vinyl . . . seriously, it’s better than I’m hyping right now!
--Pope
www.beenobscene.com
http://www.elektrohasch.de/