Truthfully, this album could never be more aptly titled.  Southern Darkness.  That’s what it says and that’s what you get.  Perhaps in a moment of inspiration, they could have called it Southern Heavy Darkness or The Night of the Heavy Southern Darkness or such, because that’s the only word missing.  Heavy.  Damn Heavy.  Massive Gibson Clutch-esque riffs, rolling monstrous bottom end, thick, sludgy southern groove.  And dark.   All dark.  “Solace” is the kind of opening track that most bands could only dream of writing.  “Lady Whiskey” adds a dollop of sensitive guitar to the fray before the heaviness comes in like a storm drifting in off the Gulf.  “Mississippi River” floats in a morass of acoustic, countrified blues without ever losing it’s power, while “Machine Gun Mantra” is everything it’s title promises.  A deadly assault of neck-breaking riffs and chugging intensity.  For fans of Clutch.  Not to be missed. 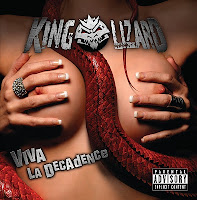 Viva La Decadence indeed.  If any of you out there felt that sleaze-mongers like Buckcherry played things just a little too G-rated and safe, have I got a band for you.   London’s King Lizard pick up where the Crue left off, stuff their briefs with a ton of man-meat and attitude, bathe the whole shebang in a “Fuck You” and a “I’m Gonna Fuck You,” attitude and roar out of the gate like a poisonous snake on the loose.  As you can tell by the album cover, subtlety ain’t in these cats’ vocabulary.  The title track is a flaming rage to post-Crue hedonism.  Better than Vince Neil vocals screaming over wailing guitars, big post-80’s riffs and a vat of bathtub meth velocity.  “Video Lover,” has got to be more perverse than a busload of groupies could handle.  Sex runs through the grooves of this song like blood runs through their veins.  Others like “Rain on You,” “Hell Yeah,” and “Taste the Hate,” load up with more than enough obscenity-spitting attitude to make up for any lack of subtlety.  Hair sleaze ain’t dead.  It just has a new name.  Hyper-adrenalized, big hair rape.  Rubbers not included.

I fell in love with this the first instant I heard it.  Brutally, full of snot, gun-metal rock and roll.  Five songs that approach like thunder and leave like a hurricane . . . devastation in their wake.   Coming from Sweden, this ain’t stoner, it ain’t blues.  It’s rock and roll with a purpose.  A deliberate intention to unsettle the foundations of your house, your mind, and your ears.  Huge riffs with a bottom end that could bounce your goldfish clear outta their tank.  Or make them want to jump out and rock (if you could visualize a goldfish headbanging that is).    Hard driving, gunpowder metal with a stoner glaze on top.  Give me a full-length album and do it quickly.  This is some seriously great stuff.

Not since the Swamp sludge blues of Black Bone Child first graced the Ripple office have I heard a band who so effectively got it.  I mean really got it.  Slacked strung acoustic guitar blues force fed some modern rock flair and dropped kicking and screaming right into the Mississippi Delta.  This is ass-kickin’, foot-stompin’ backyard party blues that never forgets to rock the fuck out.  Just listen as opening acoustic-jam “Stomp” transforms into the blistering rock assault of “Patience.”  Crap!  Break out some Blackened Voodoo beer, toss the crawdads into the pot and fry up some hush puppies because I’m deep in the south and lovin’ every minute there.  Musical skill to turn from blues to rock to metal to indy on a dime.  A soulful singer who can belt it out like a house on fire.  Groove, baby groove.

Too...much...goodness! Can't...cope! And Racer, you're dead on about King Giant.