The Live Ones - Yer Quite Welcome 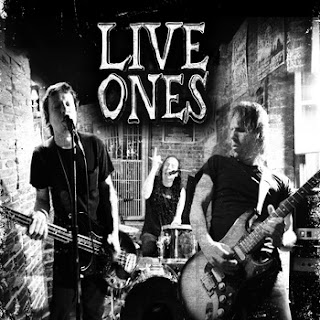 I unearthed my battered copy of Tapping The Source by the Lazy Cowgirls recently and then the very next day this new LP by Brooklyn’s Live Ones shows up. Before even hearing a note of the Live Ones, I knew the similarities were pretty obvious. Both albums have black and white no frills covers and contain high energy punk influenced rock & roll. Yer Quite Welcome’s album cover is an action shot of the band playing at NYC’s notorious dirtbag rock bar the Ding Dong Lounge. I can tell because the Ding Dong has an awesome Motorhead poster for a show they played at the Calderone Theater on Long Island in 1983. The Rods and Virgin Steele opened (legend has it V.Steele got booed off the stage). The poster’s covered up by their logo but is there for you to drool over on the back cover.

Yer Quite Welcome really reminds me of my old favorite Cowgirls album but also of Australian maniacs like Cosmic Psychos or even the Hard-Ons. Album opener “Disowned” gives you everything you need to know about this band - fast, pissed off punk (but not hardcore) played by 3 gruel dudes old enough to know better but too tired to care. Other side one highlights includes “Lifeline,” which starts off with an almost Blackfoot feel before veering into Rolling Stones territory and the Johnny Thunders “So Alone” influenced song “Haunted.” They even have a song called “We’ll Take You Higher” that sounds like something the Brought Low would write but, unfortunately, there’s no mention of weeed in the lyrics.

Side 2 has a great song called “Writing’s On The Wall” that is vintage 1974 Kiss. “We’re The Ones” jumps ahead a few years to 1977 and brings to mind the Dead Boys classic “Caught With The Meat In Your Mouth.” “Get Up & Move” is a nice autobiographical number that mentions that they got their start at the Charleston, one of Brooklyn’s dumpiest bars to play in, as well as getting shut down by the cops in Greenpoint. These are all topics near and dear to my heart.

You can’t go wrong with this one. It’s brought to you by Drug Front Records, a new label run New York’s #1 Joe Lynn Turner fan Dean Rispler. But don’t hold that against him. Dean’s worked with some fine bands like the Candy Snatchers and Bad Wizard and is foolish enough with his money to release this on LP and CD. If you like it raw, loud and snotty check out the Live Ones.

Listen and Buy here: The Live Ones

Drug Front Records
Posted by The Ripple Effect at 12:55 AM

I'm taking a listen to the album as I type this. It's really good! But of course, I knew that already thanks to your fantastic review. Nice.