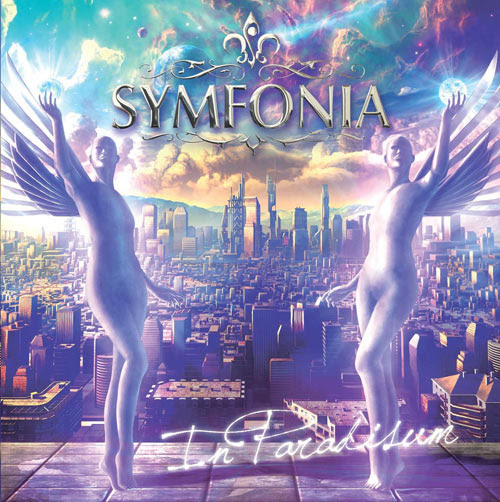 You ever get really drunk and order a pizza?
And even though you were so bloated you couldn't breath, let alone sleep, it was the greatest pizza ever?
In Paradisum is that experience, in album form.

It's everything you might imagine: European metal (e.g., Helloween, Scorpions, Stratovarius, Rising Force, etc.), modeled distantly off European composers, playing heavily-distorted metallic symphonic music; so cheesy it's beyond semantics: tapped guitar solos and, ahem, symphonic chord progressions....
In the right mood, it is goddamn glorious.
Track one, "Fields of Avalon" intro's with fucking harpsichord...! Then operatic vocals, telling a tale of epic woe over a riff George Lynch is mad he didn't write! An updated version of Yngwie's "I'll see the light tonight"....
[You're either totally in by now, or not. You know. If not-- you disgust me. Don't even look at me, Jesus. I can't stand the sight of you.]
Next-- the fucking solo starts with harpsichord! Then...! a guitar solo that would make Herman Li ejaculate!
"Come By The Hills," track 2-- again with the harpsichord! Yes, they will abuse it, and you will love it, bitch! Then: a menacing guitar/bass backup! Holy Fucking Buddha, could this get more awesome?!
Yes.
Yes it can.
Track 3, "Santiago," is symphonic Motorhead, complete with D-beat... somehow managing to squeeze in a solo reminiscent of Warrant, of all bands....
Holy Shit-- I'm actually trying to listen to this in sections, a bit at a time, but I can't stop listening... In Paradisum draws me in....
"Alayna," the exemplary power metal ballad, won't let me stop listening... it's every relationship I had my Junior year in High School, down to its up-bent final note... It's actually freaking me out how it's completely transporting me back to 1987.... I feel so sad about this chick Alayna, and I have no idea who she is... whoever she is, she fucked up the singer... whore!!
[This is what I'm talking about! This fucking cheesy shit grabs you and makes you take a stand...! Regardless of how stupid you sound!]
"Forevermore," (who else would dare call a song that?) starts with manic riffs, both heavy and melodic....
"Pilgrim Road," melody in the thin-guitar-stringed riff with keyboards, Helloween in 2011, essentially... face-fucking solo at 2:15....
Possible album highlight "Rhapsody in Black" is Accept meets Queensrÿche with a dash of Journey and Kiss' "I Was Made for Loving You...." "I walk in neon" suggests Geoff Tate and Co. again with the title and the opening harpsichord....
Closer "Don't Let me Go," another ballad with what is probably a cello in the background... this should've been on MTV's top 10 in 1986... sad, cheestastic: my inner teenager could not be more involved now....
You will hum every Goddamn inch of this album. It's a earworm waiting to happen, again and again....
All irony aside: In Paradisum is cheesy as shit-- but it's completely unironic, optimistic, exalted Heavy Metal, in all senses of the term-- and it will rock your goddamn face off, like nothing else.
"Irony" has a half-life. "Irony" is for hipsters and people too cool (read: afraid) to believe in something.s
Symfonia believe.
Mock them all you want, but they love their music.
The term "Heavy Metal" either has a religious, holy, sacred connotation to you... or you smirk at the notion.
If you know, and I mean know, in your heart of hearts, know in your very studded soul, in your denim-jacketed world, what Heavy Metal means--
GET.
THIS.
ALBUM.
10/1o, two thumbs up, Gold Metal, whatever:
Beer chugging, horn-throwing, spliff-smoking perfection.
Thank me later.
--Horn

PS: Fucking suh-weet album cover. Get that shit airbrushed on the side of a van, PRONTO.

You know sir, in certain circles I am known as a cheese connoisseur. I like to think it is a title of distinction. This offering sounds enticing to say the least.

This sounds like everything I love in my power metal. I must have...

Well, Pen, based on your connoisseur-ship, have I got some fermented sonic milk for you....

It's called Symfonia, and... oh, right, you're commenting here, so you've obviously already read about it... boy, how embarrassing... is there egg on my face... I mean cheese... no, that doesn't make sense at all... Jesus, I just keep talking....