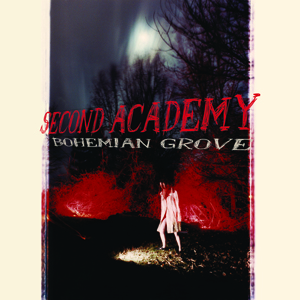 Tsurumi Records just knows how to do things right.  Spinning on gorgeous marbleized grey and white vinyl right now, is the latest long player from Tsurumi’s Second Academy with main man Eric Balaban and his latest masterpiece of sophistico-garage punk, Bohemian Grove.  But before we get to the music (which will make me quickly forget everything else I want to say) let’s get back to Tsurumi.  In a very short period of time, the good folk of Tsurumi have solidified their vision of how to unleash quality music and product onto the music loving world.  Plying their Japan-meets-America-via-Seattle-Silk-Road of inspired primal-punkish rock, Tsurumi may only have 4 releases under their belts, but what releases they are.  Between Eric Balaban’s Beautiful Mothers or Second Academy, or the Japanese art-punk of Golden, each release is done right.  In addition to the gorgeous platter hypnotizing me on the turntable right now, the album comes with a quality pressed cover, a way-cool glossy insert, a glossy poster, and forget the download code, these cats include the entire CD in the package.  How’s that for doing it right?

Ok, so enough about them, let’s get to the music, shall we?  I’ve already expressed my man-love for Eric’s prior work with the Beautiful Mothers and the first, rather stripped down, Second Academy record.  Truth be told, however, I really didn’t know what to expect with this new release.  Joined by Brent Powell on bass, and Troy Lund/and Rob Wheeler on drums, I didn’t know if Eric could continue to captivate me.  Whether his Replacements-stripped garage-punk could continue to elevate itself to new heights.  To grow . . . to expand.

If anything, Bohemian Grove not only builds upon what the lads created with the first album, it represents a quantum leap in maturity, songwriting, playing, production and just about any other aspect of an album you can think of.  Simply put, this is one fantastic record.  If you’re a fan of acoustic-laced, powerpop fueled, amphetamine garage-based rock, (think The Replacements, The Violent Femmes, early Who) then you owe it to yourself . . . nay, you owe it to mankind to check this album out.

I understand that the album is named Bohemian Grove after the title track, but damn if I don’t want to constantly write Bohemian GROOVE because that's what this album does.  It grooves.  It sways, it rumbles and rocks with a constant, head-nodding, toe-tapping groove of solid rhythm, killer melodies, perfect-scratchy riffs, and damn fine songwriting. Expect a spot on my Top 10 of 2011 for this one.

Right from the start, Bohemian Grove captured my attention.  The title track trods out of the speakers with an ominous weight, sounding like some meaty 1960’s beat-cool, retro-groovy punk rocker.  The bass and drums are just monstrous here.  I keep getting this image of some darkened ‘60’s Batman theme going on here, as if the Dark Knight existed back then taking on the Joker.  Way cool.  Way, way cool.   Eric’s voice is inspired, harmony vocals bringing everything to the front.  Fuzz guitar wails through the mix as that damn fine GROOVE just tears the song to pieces.   Infinitely cool.

For this album, Eric upped the production quite a bit over the really stripped first Second Academy record.  That’s not to say this album is glossy, it’s not.  But it is full and warm.  A rich sound that really compliments the songs, fills them out.  It works.

“Like the Rich,” is a Jonathan Richman or Paul Westerberg love song classic.  Sung with total honestly, yet tongue in cheek at the same time, Eric extols the virtues of throwing off the drapery of the “poor artist” and getting rich.  “She says I only want to get by/I say Fuck That!/I wanna get a rock for my baby/I wanna get a stick for my baby/I wanna get a knife for my lady/I wana get a house for my baby/and have a good time/like the rich do.”  All played over a slicing acoustic guitar riff and and some killer electric guitar searing flourishes.  Again, the GROOVE is there.  Have I said yet that this album grooves?

“Lullaby for the Divorced” ups the ante with it’s big-time retro, surf meets garage riffage and swing.  Totally retro but current.   The kids are going crazy at the hop or the Go-Go to this song.  Wild bikini’s are doing the swim, guys are acting cool, but everyone is losing themselves in the abandon of the groove.  Oh yes, there’s that word again.

The final cut on side 1, “Perfectly Wrong,” is quite simply one of the best songs that the early Who never played, but wrote with Paul Westerburg and played with the help of the Femmes.  Big guitars fly in Townsend-ian whirling waves, and if that isn’t a melody that should have dominated the airwaves in the mid ‘60’s, then I’ve never heard one.   But listen closely to this one and “Lullaby” before it and you’ll see that these aren’t retro classics, they’re fully modern.  Pete Townsend never wrote about getting drunk in the afternoon or how her avoiding his phone calls was perfectly wrong.  Or the simply purity of allowing two people to divorce because nothing good can ever come from bad love. It all just shows how much Eric has grown as a songwriter.

So, if I was a fan of the first Second Academy album (and the rougher Beautiful Mothers), with Bohemian Grove, Eric has made a true believer out of me.  With any righteous divination, Eric will find his place in the revered ranks of gritty but pretty songwriters, like Westerburg or Richman (or Townsend, for that matter).

In a world where every square inch of my office is covered with vinyl, and I measure an album's worth by whether or not it deserves to occupy my valuable shelf space, this is an album, I’m proud to have in my collection.

I need to check this out. I loved the first album and really should listen to it more. Never got round to checking out The Beautiful Mothers.

Oh, yeah. Check it out. To my ears, it's a quantum leap from their first album, and I agree, I loved that one also.

Thanks for checking in with us, Chris. Dig having you with us