The Remedy for Everyday Music – Featuring Ojm, Ride the Sun, The Heat Tape, and the Fuck Knights

I don’t watch the Grammys (which pretty much sums up my opinions of them) but I did see the musical debacle, assault-to-our-senses, that some people called the Super Bowl Half-time Show.  And I did hear people actually talking post-Grammy about whether Justin Bieber was robbed not winning the Best New Artist Award.  Two events in a compressed period of time that could make you lose complete faith in the music industry.  Lose faith that there are still folks out there busting it out for the sheer love of music and breaking the shit out of a bunch of guitar strings.  It’s even enough to make me lose faith in whether or not there is a God -- for if there is, he certainly wouldn’t be listening to crap like that.

It’s time for a remedy. 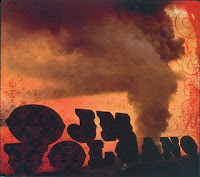 Despite their 4 previous albums, I’d never heard of Italy’s Ojm before Matt from PoisonTree Records dropped this into my lap.  Hitting me as if I’d just opened a letter from the Unibomber, Ojm exploded out of my speakers in a fuzzed out fury of retro-stonified riff mongering.  I mean huge.   What gets me the most about these cats is that they don’t really follow one mainline path towards their rock and roll fury.  Sure we got some nicely fuzzy stoner riffs, but there’s also a big chunk of adrenalinized garage attack going on here, some neo-epic psychedelic pastiche, a saliva-filled mouth of punk spittle, and even a good eye towards retro pop.  In other words we got a tear-down-the-rules blitz of real rock rowdiness.

With production by Dave Catching (Eagles of Death Metal, Queens of the Stone Age), you can get a pretty fair idea of what awaits.  Kicking off with the good-natured fuzz-meets-surf instrumental assault of “Welcome”, Ojm treat each track here as if it was their own personal canvass on which to paint their masterpiece.  And believe me, when they attack that canvas they use a big, fat black marking pen, no tentative pencil or blue line drawings here.  “Venus God” just rocks.  Simply.  I dig the vocals too; kinda spikey and throaty while still being smooth.  Give me texture.  Swath the whole thing in monster-riffs and an eardrum splattering amount of fuzz and I’m more than happy.  “Rainbow,” brings on an irresistibly warped bong-full of hazy riffing and acrid smoke, all drifting within a kick-ass melody.  But wait, there’s more!  Drop in the 7-minute epic psychedelic excursion, “Oceans Heart,” the totally accessible, near pop-perfect strains of “I’ll Be Long,”, the retro-punk stomp “Disorder,” and the two-ton heaviness of “Cocksucker” and we got us that finished master stoner piece-de-resistance.

Enough to make you forget Justin Bieber was ever born.  Give it a shot.

Riding a stoner-fied, desert-dry riff with the ferocity of a lone cowboy taming a bucking bronco, Ride the Sun burst across the arid horizon in flaming, glowing casts of red and gold.  This is gritty, grizzled stoner fuzz of the highest order.  Yep, all the biggies are here, from Sabbath to Kyuss to Fu Manchu.  I even hear a little love for Judas Priest in the flourishes of their riffs.  Big, mean, and a damn enough good time to keep the men from bathing for months.

I particularly love the vocals here; rough and raw, so far down in the throat you can almost hear a little stomach lining, but smooth enough to carry the damn fine melodies.  To me, the vocals sound a bit like the rougher vocals of BTO if the singer’d been gargling with a leftover jug of liquid plummer.  (Speaking of BTO, I don’t think that band gets near enough credit, they’re way more stoner heavy than you might think, just give one listen to Not Fragile).  But I digress.  We’re talking about Ride the Sun here, and there’s lots to say.

“Evil Reasons,” rollicks and gallops across the audio waves with hyped up passion, terminal fuzz and a monolithic bottom end.  “Livin’ Wrong” is just mean and heavy.  When the boys lock onto a riff they ride that baby, ride it hard and dry.  This is chest-beating, suburb-scaring riff-tense stoner, baby.  Dig the harmony dual lead vocals on this one.  Man, it’s so dirty you can almost smell the desert sand still lingering to the unwashed skin.Solos burst out in appropriate shades of fuzz, like an amp run through a garbage disposal.

I think “Compadre” is my favorite cut here, but that’s picking straws blindly out of the stack just for the sake of picking.  Each track here is megalithic heavy, fuzzy, and all kinds of acrid smoke hazy.  For riff mad stone heads, this one shouldn’t be missed. 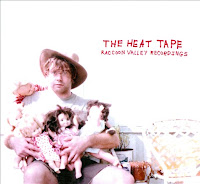 So raw, so primal, The Heat Tape is positively primitive.  This is caveman-hit-guitar-and-smash-drums, lo-fi, lost-way-in-the-back-of the-garage, garage rock.  Ok, I lied.  It’s not garage rock.  The CD is named after the trailer park where these “gents” live and conduct all their business.  So we need a new genre here.  Trailer Park Rock.  No pretense.  No gloss, or gleam, or hope of glory.  This is near prehistoric distorto-punk with a hankering for a catchy hook and a turn of a phrase.

With no song clocking in at even 3 minutes (the average time looks to be about 2 minutes flat) The Heat Tape rage out of Makanda, Illinois singing songs of such import as “Skin” (a love song about McDonalds breakfast), “21st Century Turd” (about being a piece of shit), and “Feel No Good” (which is about being a hungover piece of shit.)  Don’t go looking for Stephen Hawkins expanded theories of the physics of Black Holes here.  Just pop open a twelve-pack, hit something hard, and play this quagmire of lo-fi ditties.  For fans of Jay Retard, The Marked Men, and the Thermals.  Yep, that should do it. 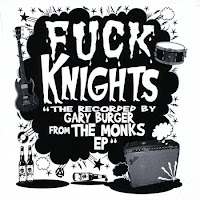 Fuck Knights – The Recorded by Gary Burger from The Monks EP

Perhaps the only thing that could make The Heat Tape sound clean and refined is another offering of demento-destructo garage surf punk from the Fuck Knights.  You’ll notice that the CD is titled the “Recorded by Gary Burger . . . EP” not the “produced by Gary Burger” CD.  You see, that would require there actually being some production on this baby rather than a cacophony of frantic, speaker rattling, oil can rock.  But then that wouldn’t be the Fuck Knights, and I wouldn’t enjoy it near as much as this one.

Simply put, the Fuck Knights can fuck the hell out of just about any other lo-fi outfit who dares step into their garage.  Guitars and speakers are set on terminal fuzz mode, Bass is played through a 1967 rusty muffler, and the drummer gave up on a drum kit years ago, instead assembling a litany of acid-eaten barrels to pound on.  And he does, Lord he does.

Despite all the overblown analogies in the previous paragraphs, at their simplest, the Fuck Knights are sheer brilliant, massively distorted and psychotically warped garage punk of the frenzied and frantic variety.  Yet hidden within the vague psychobilly and surf influences, and around the back of the destructo-wall of fuzz and noise, are some catchy as hell melodies and some serious songwriting smarts.  Each song blasts by before you’ve even had a chance to blow your nose, but in that time, the Fuck Knights have unleashed more melodies, dazzling fuzz solos, and near-manic energy than could be found in that entire 30 minute embarrassment of a Super Bowl Halftime Show.

You want your rock loud and raw, dangerous and illegal in several states?  Then the Fuck Knights are your band.  They may never get a chance to take the stage at the Grammys, but they just may be the saviors of rock and roll.