Ripple News - The Kut get Closure on their forthcoming video 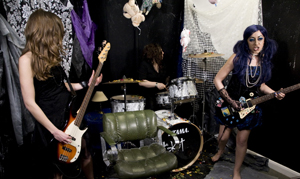 The Kut, after facing a busy year in 2010, ended with a bang by headlining the 800 capacity Santa’s Xmas Ball at Proud Camden.  Having been making slow but steady progress the girls are now set for an exciting 2011 with the pending release of their new video for track ‘Closure’. Set to be released at the end of March the release itself initially appeared on the bands’ recent debut single ‘Doesn’t Matter Anyway’, however the b-side amassed a great deal of support that lead to the track being re-recorded at Cartel Studios. Earning support from fans of Incubus, Korn and Nirvana, ‘Closure’ demonstrates a darker and more mature side to the all female band, broken beats and dynamic emotive power. Having already been reviewed as “the best all female band the UK has ever produced,” the progression has been slow, but finally appears to be worth the wait.

The Kut themselves, are a trio of accomplished female musicians, with a dark indie rock sound. In 2008 their self-recorded demo ‘The Vision’ gained the band a great deal of attention from the credible sources, but more recently their support has spanned from Radio 1 Introducing in Northern Ireland, BBC Tees, BBC Liverpool and a number of key regional radio stations, but now also to high profile FM stations in the USA. Interest was amass towards the end of last year, when ‘Doesn’t Matter Anyway’ was shortlisted for inclusion in a US Ralph Lauren advert and cult series ‘The Good Wife’, while latest news includes negotiations with ‘Rock Band’ following the Marshall endorsement of lead guitarist and vocalist, Maha.  With comparisons describing frontwoman Maha as a Slash/Linda Perry hybrid, the band combine sultry vocals, basement rock licks set against solid bass and drums to make their own original sound.  Having featured alongside big names like 50 Cent on US Channel Pax TV, it is hoped the new video will help UK will start to support this London band in 2011.

“If your interpretation of girl power favours a Lynchian landscape crossed with Edward Scissorhands and fishnet stockings, and you have dreams where the Sugababes are locked in a cell for crimes of

aural assault while you crowdsurf in a sweaty venue to hard edged indie rock, then The Kut are definitely for you” Ken, Strummer Online, UK

“The Kut lay down a matchless melodic vibe that oozes edginess and attitude from every pore. If you are in search of a true rock band and not a pop band trying to sound like one, then look no further because the Kut is just that: a rock band and a damn good one” Drago, Froglix.com, UK

“From a smoky cellar club tucked in a back alley somewhere in London, enticement beckons and hypnotic lures. Hip cats aware of the sway; have flocked to take in the newest group that procures the latest basement rock sound... females grace the tiny stage hawking their musical wares. They go by the moniker of The Kut” Lucky, Sugarbuzz Magazine, USA

“The Kut... band from the future indeed! Girl power? That's so passé. Check this...” Cozzie Music