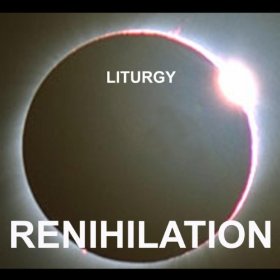 It is in fact "hipster" metal; lead singer/ guitarist Hunter Hunt-Hendrix (if his name wasn't enough of a clue) never denies that in interviews.

Further, I don't know (being neither kvlt nor tr00) if this even qualifies as black metal.

The vocals are completely indecipherable; sometimes you can't even tell for certain if they're even happening. So let's do what death metal likes to claim it does-- consider the "vocals," i.e., the sound emitted by the larynx of the singer, as another instrument, or even a sound effect, for added aggressive/sinister ambiance.

Additionally, let's forget it's four guys playing guitars and drums and just think of it as music.

Short, oversimplified version: spectralism, or spectral music (though it sounds cool as shit, like it's all about spectres), is actually music composed and recorded using a much broader spectrum of notes than the 12 we westerners use; it is further composed consideringcomputer-generated data about the way sound hits the ears, rather than only using your own ears.

Maybe I've lost you, but stay with me: this is cool shit once you decode it. (And is relevant to Liturgy, I swear.)

Let's say we're writing a song. We have 12 notes to use, in pretty much any combination we want (though we'll tend to use pre-established patterns like chords). A, A sharp, B, C, and so on.

Next, we'll use a... wait for it... spectrogram, a device used to visualize and analyze sounds. (It's also known as a sonogram or a voiceprint-- you've seen them on any procedural drama on TV, where some character, usually a tech, finds some stupidly important clue by analyzing a background sound on a ransom tape or voicemail or some shit.)

Still with me? I love your diligence. You look nice today, BTW. Have you lost weight? Seriously, that's a good look for you. You're totally working it.

I know I'm asking a lot to get into one album. But that's the music writer's job, isn't it? To go to ridiculous lengths to find the gold hidden in all that sound out there, so YOU don't have to?

You're welcome. It's no thing.

So finally, we compose music based to an extent on how sounds play out, intertwine, etc., using what they look like on the spectrogram.

The music computers would write for humans based on the computer's understanding of the properties of sound and the human ear.

And don't EVEN front, yo-- you know that sounds goddamned cool.

Liturgy, then, is computer-generated black metal. (In my head anyway.) The sounds on the record don't really conform to what your ears would normally hold as "music." It's not radically different, but different enough to be initially off-putting (for people who normally listen to metal, I mean; people who don't might not even recognize this as music, like the time as a kid I was listening to Dark Angel in a room near my grandmother and she kept wanting to know what machinery had apparently been left on).

Find a dark room, some nice headphones, and let Renihilation wash over you; hear it as sounds changing, rather than anything else.

It's the musical equivalent of those paintings you have to stare at for awhile before you can see the hidden image in them: once Liturgy registers, each of the ten tracks is a lush, epic, tragic soundscape; one that (to me, anyway, your experience may vary) seems to accompany the remembrance of a perfect, just kingdom that was destroyed æons ago. The vocals occasionally pop up like some madman shrieking about the kingdom only he remembers; one he can't convince others actually existed.

Sad, wistful, furious, aching... everything I want in music.

Tremolo-picked, cold-sounding guitars play several melody lines at once; the different lines seem to intersect and make minor chords that swirl and change like the goop in a lava lamp; the blast beats defocus into a pulsing wave of sound that makes the whole album sound almost rubato, like it comes in and out of time, beats contract and expand... (and the fucking drummer Greg Fox only uses a four-piece kit! Just two cymbals, a bass drum and a snare...!).

There's ten tracks; four are "untitled" and are ambient pieces; the other six are beautiful.

If you need to sample one, try Ecstatic Rite. Tell me the end isn't especially great.