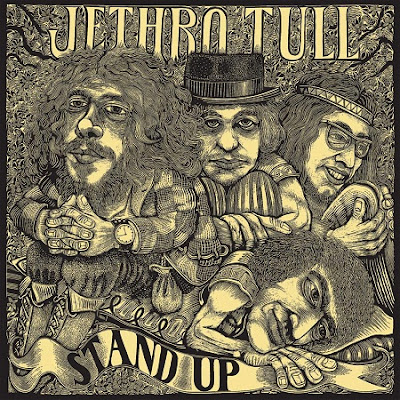 Admittedly, I don’t know squat about Jethro Tull. I mean, Jethro Tull outside of songs such as “Aqualung”, “Cross Eyed-Mary”, “Bungle in the Jungle”, Locomotive Breath”, y’know . . . the “hits” as they may be called. Sure, I’ve owned and played, and replayed, and lost, and re-owned the band's M.U. Best of disc a hundred times over and I’ve lived with their music for the better part of my life as the songs have made their way through the FM rock station airwaves. But it wasn’t until recently that I realized that this is a band that I’ve always claimed to adore, yet knew in the most superficial way. Kinda’ like being in love with that hot chick on the far side of the mall but not knowing if she has any redeeming qualities outside of her outstanding looks. So, here I go. Manning up, walking up to her, asking her name, preparing for the eventual rebuff, and go ahead and fill in your own conclusion.
I’ve gone back and explored the sounds of Aqualung, Thick As A Brick, and War Child, and I’ve come to the conclusion that like most women, Jethro Tull are more complex a creature than one will ever truly know. In listening to Stand Up, all I can really do is marvel that this is music originally released in 1969, the same year that saw the first two Zeppelin albums, all three CCR albums, Abbey Road, Santana’s first, Let It Bleed, and countless other releases that changed the music world and the way so many of us actively listen and create music. The music from Stand Up probably doesn’t need any description from me, for I’m sure I’ll never be able to add any new or useful insight. I can, however, sit back and smile that I have been blessed with ears, and appreciate in some voyeuristic fascination that music fans world around have been blessed to have a group of young men who pushed the boundaries of folk and rock music to carve out their own cubby in the world of progressive music. Gentlemen, thank you from the bottom of my heart. Every spin of your records is a musical safari through lands, cultures, and ideas that I never would have imagined. 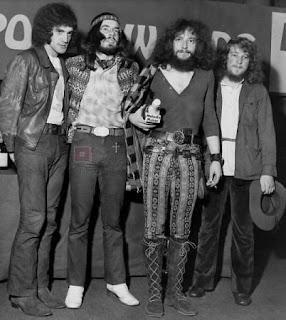 This re-issue, and especially this particular package, of Stand Up is beyond cool. The original re-mastered version of the album needs no introduction other than to say, “Woof. Incredible”. The bonus material to this package, on the other hand, is above and beyond the price of admission. If you’re like me and somewhat versed, but not really, in the ways of Tull, then go through the CD and familiarize yourself with the tunes that make up the gem. You should immediately recognize tracks like “Fat Man” and “Nothing Is Easy”, and you’ll probably sit back in some cosmic orgasm when you hear “Bouree”, but these tracks aren’t what makes this particular package so fucking cool! Kick that disc out and insert disc 2 . . . yeah, that’s right, the live portion of the package. Good. Now push play and join me on this journey of sonic discovery!
Disc 2 was recorded live at New York City’s Carnegie Hall in 1970 and having never had the opportunity to catch Jethro Tull live, I now feel cheated for being born too late. Thankfully, I now have this live recording in my possession and it’s fair to say that its one of the most important pieces of my collection. I’m sure it doesn’t need to be said, but Jethro Tull are a bunch of bad asses! Opening with “Nothing Is Easy”, it takes all of five seconds to realize that this performance is going to be a thrill ride and by the time Ian Anderson utter s the first lines of lyric, it’s a stone cold fact that the world’s best scientists would spend several lifetimes trying to dispute that Jethro Tull are a spectacular and brilliant live group. The band comes across as confident despite this recording being early on in the careers, the breaks are tight, the solos are filled with passion and creativity, and the energy is infectious. Close your eyes tight enough and you may smell the sweet fragrance of weed filling the air. This is a crystal clear recording and whoever had the foresight to push the record button needs to be thanked, maybe even knighted. 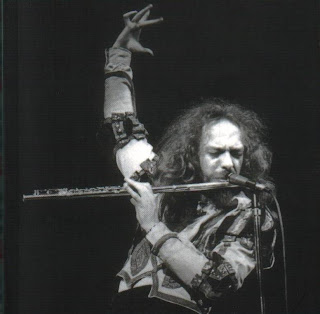 By far my favorite part of this concert is the second track, “My God”, and oh my God . . . Ian Anderson, what have they fed you, my friend?!? First off, the song is one of those dark and gritty tunes in tone, opening with some chaotic acoustic guitar flourishes before dropping into that ever so somber and mournful chord progression. The music almost sounds like a dirge and Anderson’s vocals always come across as intense and manic, and once the drums and electric guitars come in on the second verse, it’s like lightening striking a tree and splitting it in half. I love the feedback . . . I know it’s technically a flaw but it adds an authentic air to the recording, make me feel more like I’m right there watching everything going down in front of me. Then, it’s all about the flute solo. Amazing. Absolutely amazing . . . filled with vibrancy and massive elements of creativity, immediacy, humor, and intellect. Anderson is insane and a god. The dude’s head must spin from lack of oxygen after doing this kind of thing every night! I never thought the flute could be so rockin’, even after hearing Tull for the better part of my life and knowing better. Flat out . . . Jethro Tull rocks!
And it’s not just Anderson who shows his chops and musical proficiency on this live album. Guitarist Martin Barre and pianist John Evan steal the spotlight on numerous occasions, adding flair, lighting up the sky, dancing between the bombast and the delicate, none of it possible without the rhythm section of Glenn Cormick on bass and Clive Bunker on drums. The way these guys communicate musically on stage is something to behold . . . like one musical being split into five personalities! “To Cry You A Song” is outstanding and a great example of how this unit works together to create a stunning tune. There’s something just a little sinister about the tones of all of the instruments and Barre’s guitar work is of a searing nature, the lyrics spit out by Anderson are packed with imagery that makes me want to throw my current life to the side with all of my dirty laundry and try my hand at something else. The starts and stops to the song are just that tight . . . world class. Love it! 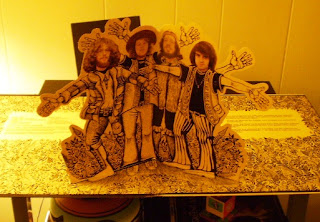 Christ, I could go on about every song . . . “A Song For Jeffrey”, the medley of “Sossity, You’re A Woman/Reasons For Waiting”, and “Dharma For One” (bitchin’ drum solo) are all killer! The thing I realized with Jethro Tull is that the music they create is thought out, highly intelligent music meant more for firing up the mind than it is to get your ass swinging on a dance floor. The off time rhythms, the odd chord progressions, the intellectual subject matter, the arrangements of the music, it all screams progressive rock and I love that. It never feels like these cats are trying to speak above me. They may be speaking above me, but that’s more due to my own lack of intelligence than the band trying to be superior mental beings. Stand Up is a must for any who are trying to get into Tull, but I think you’d be better served to pick up this collectors package (complete with pop-up figures of the band in the packaging . . . get it? Stand Up? Pop-up? Intellectual) and spin the live portion over and over and over again. The live venue is where one truly gets to understand a musician and what it is that they’re trying to express, and this performance is one of the best I’ve heard from anyone, to the point that I’m inspired to complete my Jethro Tull catalog by draining my bank account and filling up my Amazon cart.
--Pope

Pope. That was Epic! That is all.

Reading this got me thinking how long it is since I've listened to any Tull. It used to be I had "Jethro Tull and a bunch of other stuff" when I'd tell someone what music I had. Time to start playing it all again. I'm 58 now, and was about 17 when I got the Aqualung album (by sheer chance, a kid down the street traded me that for my Hendrix "Astro Man" album). Once I heard Aqualung, I knew I'd got the better of the deal and there was no turning back.

I just found your site after running across a band called USX and wondering what the hell that is. Very interesting thing you're doing here!

Thanks for writing. We're Tull diehards here! And just so you know, the deluxe package has just been applied to the Aqualung album and it's awesome. Review to come soon

I saw Jethro Tull on tour when they had just recorded this album. It was the first time I had seen the new guitarist Martin Barre and we were expecting to see Mick Abrahams. Anderson introduced the new songs saying the album was "bloody great". We were all blown away. Fantastic night and for me, the zenith of their powers. They never equallled the impact of the first three albums and "Stand up" was the best. Reason for waiting? Fabulous.

"And the memory stays clear with the song that you hear.
If I can but make the words awake the feeling."

There will never be another band as good as this.