Havok’s Time Is Up & Helstar’s Glory of Chaos: A new version of classic, and a classic version of new

Both Havok's Time Is Up and Helstar's Glory of Chaos have wonderful production: clear, powerful without clipping.... Both have great overall musicianship; speaking as a 25-year guitarist weaned on bay-area thrash metal, thrash can be very difficult shit to play, especially as a group. Both bands do well here, and seemingly easily. 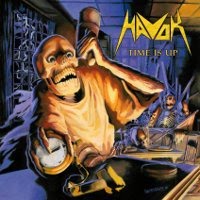 First up: the newbies from Denver, Havok, and their second LP (after 2009's Burn), produced by James Murphy: Time Is Up drops March 29.

Havok have (the requisite?) generic song titles: for example, "Prepare For Attack," It doesn't matter, though:  generic or not, it launches out of the gate with a chorus riff difficult to forget, something like "Motorbreath." It's furious, articulate shit.

"No Amnesty" has a cool Djent riff and is a furious song overall, much like "Scumbag in Disguise" (which also has a nice pre-solo break around 2:00), sounding like Forbidden's "Chalice Of Blood." I've listened to it over and over-- it causes air drums every time. You know what I'm talking about.

"D.O.A."(with its Tom Araya scream at 2:45) has a chorus sounds like something off Vio-lence's Eternal Nightmare, and "The Cleric" has an "Am I Evil?"-ish flatted fifth intro. "Scumbag in Disguise" is simply great: furious, technical, groovy-- everything you could ask for in thrash metal. They're experts at near-homage: they're clearly heavily influenced by bay-area thrash (specifically second generation, like Testament or Forbidden), who were heavily influenced by the NWOBHM.

Highlights: "The Cleric" (which is somewhat unique musically) and "No Amnesty" (which is totally generic but rocks as hard as anything Testament or Forbidden ever did). 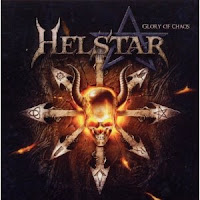 For those not in the know, they formed in Texas in 1982. They featured at one time Mike Howe, who went on to front Metal Church, and in return briefly had David Wayne as frontman (who came from Metal Church).

Point: they've been around forever, and were at the beginnings of 80s metal. They're old.

Greatest part: there is no way you could goddamn tell that they're old: Glory of Chaos rocks like it was 1987. More importantly, Helstar have that something, that uuuh!that Havok don't.

Havok rock (and they do rock) like they're great students of the Thrash Metal Experience.

Helstar, however, are the Thrash Metal Experience.

"Alma Negra" (black soul) is fucking awesome, and worth getting if you ignore everything else I've written here. A 10 out of 10 power/ thrash metal song. If you're still interested get "Summer of Hate" and "Monarch of Bloodshed" too.

Metallica: THIS is how you age well. Goddamn.

Singer James Rivery sounds uncannily like Sanctuary/ Nevermore's Warrel Dane but with more aggression. It's Rivera that truly makes the album: he can really, completely sing, in all senses of the word, and his articulate voice highlights and accentuates the riffs on Glory of Chaos-- when he's screaming on "Alma Negra" it sounds almost upsetting, like he's so angry he's shredding his talented voice to make a point.

Either way, with either album, you're Golden.

Buy here: Time Is Up