And how do I, your utterly-reliable narrator, the Grand Inquisitor, I, Torquemada and his band, the Howlin' Inquisitors, fit into these proceedings?

"Grindcore" might be defined as... pretty much any other extreme genre, compressed to its maximum energy and its dominant characteristic: beit anger, aggression, anxiety, etc. (and usually in microsong form).

"Grindcore" (this is me saying this after nearly 4 hours listening to it), is almost so far beyond "music," as it's usually defined anyway, that it becomes sonic massage, like sound waves blasted at your sore bones and muscles. It's actually relaxing me a little, like one of those vibrating chairs. 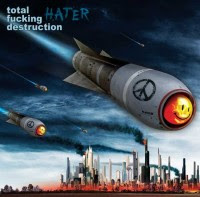 Speaking Karamazovly (yay for new adverbs!), as the title suggested, Total Fucking Destruction (and their newest, Hater), would be closest here to being the sensualist oldest Karamazov brother, Dmitri: joking, multi-faceted, with the most ideas, but also maybe too jokey, and sometimes off-topic-- the coked up religious exhortations of a confined psychotic? [Note to self: why isn't Psychotic Mantra a band name?] The whole album is very cool, and articulate by grindcore standards, particularly "Human Is The Bastard." There's an obvious sense of humor usually absent from extreme music. 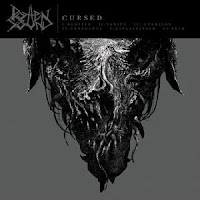 Ivan (or Vanya) then, the very serious, brooding, seething next-in-line brother, is black metal taken to an even more distant extreme, as Rotten Sound and their album Cursed have managed to do (I didn't actually think

[Sidenote: Jazz fans have been looking for the "next thing" for decades now and wondered why there's no new Coltrane or Miles Davis to innovate the genre: this is because Coltrane broke genres; the new innovator wouldn't be in jazz at all--  s/he'd show up in something like grindcore,or at the very least extreme music, just as bebop jazz was "extreme" 50 years ago; it makes you wonder what could possibly happen to music in the next 50 years to make grindcore seem tame. Actually, it makes one shudder....] 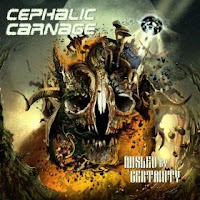 AND we're back. So-- brother Aleksey (Alyosha), the youngest, most earnest brother might equate to Cephalic Carnage, who, with their newest album Mislead by Certainty, are in their way progressive metal taken to its logical endpoint; there's a more obvious breadth of musicianship, there's more ideas than the previous bands, more color (like the cover, even) overall. They manage to play what can be readily classified as grindcore, and yet simultaneously ignore its conventions: they have, for instance, a 12-minute song ("Repangaea") that's almost ambient, and they also occasionally use alto saxophones, managing to sound in spots like a furious Glenn Frey. "Power and Force" hits back to traditional grindcore, and is as fast and rageful as anything else here. "A King and a Thief" goes all Watchtower on you for about a minute, lest you pigeonhole CC. 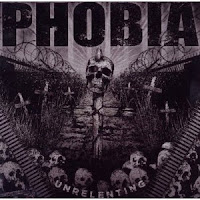 Who then, is Smerdyakov, the illegitimate son of music, the young psychopath, the killer of cats...? Who's left? Phobia. I'm thinking their album Unrelenting. Dark, like maxed out death metal (complete with heavily distorted bass guitar), Phobia are as black and white as their cover suggests: pure, punishing speed and rage, like Nails played even faster and more aggressively. Highlights-- "Killing Time," Strive Conception," "Life's Animosity," specifically the brief breakdown at 1:00, "Tradition of Power," and "Enemy Within"-- though if you like one, you'll like all.

James Joyce famously said, of Dostoyevski:  "Madness you may call it, but therein may be the secret of his genius... I prefer the word exaltation, exaltation which can merge into madness, perhaps. In fact, all great men have had that vein in them; it was the source of their greatness; the reasonable man achieves nothing."

Sometimes. For a minute.

[As a sidenote on the whole "violent music leads to violence" issue: speaking for myself at least-- utter crap. You ever listen to four straight hours of goddamned grindcore? At the end I wanted to groove on Celine Dion and rub bunny's fur. True story.]

*Shut up. I'm not overreaching with this analogy. And I'm using this goddamned English degree somehow.

Penfold said…
Dostoevsky applied to grindcore. How can I be anything but appreciative of that, even if you beat me to the punch in reviewing TFD? Terribly good sir!
February 18, 2011 at 9:38 PM

The Ripple Effect said…
I'd agree if I was smart enough to know who Dostoyevski is.

Which band did he play for?

Horn said…
Mastodon! That's why they do concept albums about Rasputin.

Thanks Penfold! Who says literary pretentiousness doesn't pay off? (Figuratively.)
February 20, 2011 at 11:17 AM