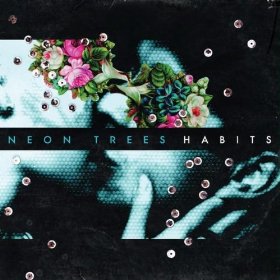 Some friends never learn. “There you go messin’ with my mind” and tell me that a debut album can’t be awe-inspiring and awesome. Neon Trees’ song “In the Next Room” does make a valid point and I wish to do the same. Neon Trees is one of the best new bands around. For my 2010 Best Music List, Neon Trees had the #1 song with “Animal” and Habits was the #6 album of the year. I still stand firmly behind those two decisions.

Now I wish I could say I have been following Neon Trees for years or that I knew about them when they were just a simple rock quartet from Provo, Utah, but that’s not the case at all. The first time I heard about them was from Spin Magazine and Mark Hoppus, co-founder, bassist and singer of Blink-182 as well as bassist/lead singer for +44. Back in March 2010, Hoppus praised the band and picked them as Spin’s “Band of the Week” at South by Southwest (SXSW). He said that the band hit him right away and he “listened to [them] four times in a row” after a “journalist pal” tipped him off.

I share a similar feeling. It’s somewhat difficult for me listening to a new band because I find it very challenging. It’s a tricky thing to explain, but I will do my best. There have been bands I have put all my love and passion into following them, only for them to breakup within a few years. Then there are the bands I “casually” enjoy for a few years when they are just a small “indie” band before they blow up and become the new “it” band. Even though I have listened to “that band” for years I feel like I have joined the bandwagon by saying “Oh, yeah I have been listening to them for years” because I have never been entirely passionate about them. One way or another it feels like I’m coming across as a pretentious music aficionado and I don’t want that at all.

It’s hard to explain, but I digress. Since March 2010 I kept hearing about Neon Trees and just kept putting off listening to them despite hearing things about them constantly. Eventually over summer I heard their single “Animal” and was completely enamored by it. However, it wasn’t until an appearance on the premiere episode of “A Different Spin with Mark Hoppus” as the first guest/musical act on the show did I immediately buy the album the next day. Ever since buying Habits I have listened to the album at least once a week starting Friday, September 17th, 2010.

Neon Trees is composed of Tyler Glenn (keyboards/lead vocals), Chris Allen (guitar), Branden Campbell (bass guitar/ vocals) and Elaine Bradley (drums/percussion/vocals). This quirky quartet reaffirms my belief that you can be successful and still be an alternative band in today’s music scene without compromising your sound.

Habits kicks off with the sensational “Sins of My Youth.” The opening of “Sins of My Youth” gives a preview of the chorus with Tyler Glenn singing “I’ve got these habits I cannot break” accompanied by killer keyboards before bursting into the actual song. Sweet guitar riffs transition into smooth drumming with Glenn’s sweet voice fueling this appealing and amazing album. The band is reminiscent of OK GO and The Killers (especially from their Hot Fuss days).

The other day I was in a coffee shop hanging out with friends when “Love And Affection” came on the radio. I started singing along with three complete strangers while my friends were shocked. That’s the beautiful and brilliant thing about Neon Trees- they create catchy, crazy, yet charismatic songs filled with “love and affection,” which leads me to their hit single and my favorite song of 2010.

“Animal” is the lead single off Neon Trees’ debut album Habits and has currently peaked at #13 (as of this writing, during its 22nd week) on the Billboard Hot 100. The high intensity, catchy chorus and titillating talent that emerges from this song makes this album a must buy. I was immediately hooked with the opening lyrics, “Here we go again/ I kind wanna be more than friends/ So take it easy on me/ I’m afraid you’re never satisfied.” This song reeks of coolness and you can’t just listen to this song once. It’s infectious, irresistible and inspiring music that makes you want to get up and dance to it as you sing along the entire time.

“Your Surrender” doesn’t shy away from its roots of post-punk, dance-pop and classic 80s music. Feeling reminiscent of Depeche Mode, INXS, The Strokes and other contemporary bands that incorporate several different musical backgrounds, Neon Trees crafts creative catchy slick songs possessing awesome choruses. Everything is well-balanced and focused. There is nothing wrong with creating irresistible pop music.

And “1983” is another perfect example of that. Besides “Animal” this is one of my favorite songs of 2010 and an astonishing song that will hook you onto Neon Trees. This song is beyond catchy. Words can’t describe how addicting and amazing it truly is. One of the things I love most about “Girls And Boys In School” is how the opening hooks you immediately. This song embodies more of that post-pop punk feel kind of like The Virgins and like all the other songs on the album is super awesome.

After listening to “In The Next Room” I felt like listening to classic 1930s jazz music and the Stray Cats. Opening with an awesome bassline, “In The Next Room” progresses into a savy, sophisticated song and is also reminiscent of The Cure’s “The Lovecats.” Neon Trees metamorphosizes genres and decades flawlessly to create a sound that is all their own.

The album concludes with “Our War” and is the cherry on top. Although only eight songs, don’t disregard this phenomenal debut album. This debut demonstrates the slick sound that awaits the future for music fans. Neon Trees are a breath of fresh air in a mostly dreary, dry mainstream music scene. They are like a new wave, alternative pop, post-pop punk, dance-pop, indie pop and most importantly, a kick ass rock band that makes excellent music. Their upbeat unique sound solidifies them as a band worthwhile to watch.

Recently I even offered several music aficionado friends, who thought about buying the album, a personal money back guarantee that they would be entertained, engaged and enjoy every minute of Habits. If not I would gladly refund their money. Since I made that offer, all those specific friends gladly took me up on the offer and came back satisfied thanking me for my recommendation. Habits is that good!

Posted by The Ripple Effect at 2:04 AM