It’s sad, but my very profitable work as genealogist for the two royal families of New York may quickly be coming to an end.  You see dear waveriders, at the moment the future of these two grand bloodlines is in serious jeopardy.  Only one young man from each family is left to carry on each esteemed line.  In a bold stroke of luck for this writer the two men in question, Eric James and Mason Ingram, have decided to join forces in a musical venture appropriately titled The Last Royals.  I sincerely hope this title is in jest.  I’m not well suited for any other profession.

Now let’s talk about this musical venture, shall we?  These two debut singles taken from a recently released EP represent pop music near the summit of Mount Perfection.  Seriously, these songs are extraordinary!  The Last Royals describe themselves as ‘urban walking music’.  If that is true, you should expect to see people in downtown cityscapes either happily skipping along or walking at a quickened pace while undulating wildly.  I know that is how I would be transporting myself while under the influence of that soundtrack!

“Crystal Vases” is the first song on offer.  The vocals tell a bittersweet tale of a man admiring a vase that has survived a bad break up and now functions as an ashtray.  Would you think a song concerning this topic would be depressing?  While that is certainly a reasonable assumption, the music played behind this sullen tale makes it strangely jovial and celebratory.  The song is very well structured.  It gradually builds itself up from a humble guitar/vocal start, crescendos with added instrumentation to the chorus, then brings the energy level back down in order to build once again to the finish.  And then there is “Backseat Lovers”.  This synthesizer driven monster will have you bouncing off the walls!  I’m reminded of Cake at their funkiest.  The highest compliment I can pay The Last Royals is that after listening to these songs repeatedly, I’m most upset that I can’t have the instant gratification of immediately hearing more of their music.  Download these songs now! 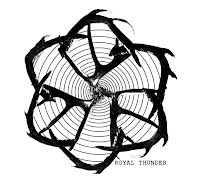 You know, sometimes it’s really not enjoyable being a royal appointee.  This is one of those times…but hey, it’s a job.  After having cut ties with my previous genealogist position in New York, I moved south to Atlanta where an old friend of mine put in a good word for me with the royal family of Georgia.  Upon my arrival I appeared before the court, ingratiated myself with the important parties involved, and thus became the new royal image manager.  The first order of business requiring my attention was to hear applicants wishing to become the ‘Official Thunder Manufacturer’ of the royal family.  Apparently the royals of Georgia were big meteorology buffs who already employed people in the positions of ‘Official’ lightning catcher, tornado chaser, hurricane designator, and cloudscape portrait maker.  ‘Thunder Manufacturer’ was simply the next position that needed to be filled.

And that waveriders is how I found myself sitting behind a table in an empty gymnasium, judging the merits of hopeful ‘thunder’ applicants, bored out of my skull.  You would not believe how many people took to the stage before me and simply yelled “BOOM!” as loud as they could.  It was stunning and baffling at first, but eventually it became mind-numbing.  That’s not to say there were no standouts, however bad they might have been.  First there was a one-man-band with two bass drums on his back and cymbals in his hands.  That guy was interesting.  Second, there was the smug DJ who simply laid his large speakers face down and played a series of bass tracks at extreme volume.  Yeah, no.  Lastly there was the old, manic traditionalist who brought in a thin sheet of metal which he expertly manipulated to produce the sound of a clap and several rolls of thunder.  Impressive, but not what I really wanted.  Thankfully Royal Thunder (how appropriate) eventually took the stage for their audition.

The three members of the band set up their gear onstage, tuned their instruments, and proceeded to demonstrate their power.  All seven songs from their EP, counting the introductory track, were played in order.  It was uncanny how easily the band’s music could be compared to an actual thunderstorm.  The introduction utilizes the female lead singer’s haunting voice to create the first hint of tension, as if you can just make out dark clouds forming on the horizon.  You can feel something heavy is approaching.  “Sleeping Witch”, the first proper song, simulates the cloud mass rapidly overtaking your postion and the rain pouring down.  “Mouth of Fire” and “Low” represent the brunt of the storm.  Thunder and lightning abound and the rain is being blown almost sideways from gale force winds.  “Grave Dance” quiets things down for a few moments, as if you are in the eye of the monster swirling around you, but before long the full force of the storm has returned.  “Hotel Bend” mimics the sound of the storm winding down, and the last song “Deacon” proves that one needs to be cautious no matter how quiet and seemingly peaceful things become.  Many storms throw one last round of brute force your way before finally leaving the area for good.

Okay, now that I’ve gone on perhaps too long concerning what the music reminds me of, it’s time to acquaint you with what the band actually sounds like.  As I mentioned before, there are three members in this band.  Mlny Parsonz plays bass and sings, Josh Weaver strums the guitar, and Jesse Stuber beats on the drums.  Together they create some haunting, groovy, doomy, muscular, beautiful tunes.  Instrumentally I often think of the mighty Black Sabbath, but the vocals are another matter.  It is a failing of mine that I can not come up with an adequate comparison for Ms. Parsonz’s exquisite vocals.  I’m certainly reminded of someone but I can’t quite put my finger on it, and for that I apologize.  What I will say is that the vocals are truly fantastic, and are definitely a highlight of the listening experience!

Obviously after listening to Royal Thunder I had found my new ‘Thunder Manufacturers’.  All of the remaining applicants were dismissed, and I hurried to inform my employers of the hiring.  They were going to be thrilled!