A Sunday Conversation with Diablo Royale 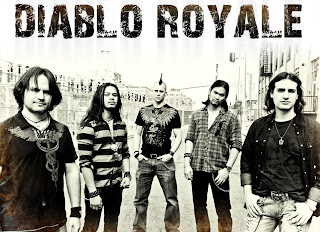 Heavy.  Nice and heavy, with some real balls.  That's the way we like our rock and that's what Diablo Royale bring on in spades.  Here's Mike, the drummer, filling us in on what makes Diablo Royale tick.


When I was a kid, growing up in a house with Cat Stevens, Neil Diamond, and Simon and Garfunkel, the first time I ever heard Kiss's "Detroit Rock City," it was a moment of musical epiphany. It was just so vicious, aggressive and mean. It changed the way I listened to music. I've had a few minor epiphany's since then, when you come across a band that just brings something new and revolutionary to your ears.

There are so many of these, really.  And they still happen now.  Most recently was seeing Alice In Chains in NYC in the Spring.  They are a phenomenal band and put on a live show to be envied.  As far as the first one, for me, personally, I'd have to say seeing Lars Ulrich behind his white Tama kit.  That's when I knew I wanted to play the drums.

We are a riff oriented band and the songs really do start that way.  They then go through a lot of revisions as a the lyrics and melody are done to make sure that it flows.

As band that is really hard to say, so I won't just pick one.  We are influenced by a lot of bands, AC/DC to Megadeth to Avenged Sevenfold.  Not all of them are so noticeable in the music, but it's there.

For me, personally, I'd say Vinnie Paul from Pantera.  He's a monster drummer that lets you know that he's there but never gets in the way of the music.  As a matter of fact, he always seems to write the perfect drum part to fit the song. 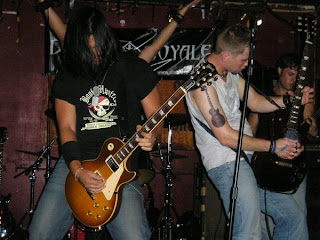 It's really not that hard, it's everywhere.  Other bands that we play with, new albums that come out and going out to live shows.  Just constantly being around music does the trick.

A punch in the face without the pain.

Energy, lots and lots of it.  We want people on their feet and moving when we play.  That's what we look for when we listen to music and watch bands and we make sure our audience experiences that.

Well, the worst (or best depending on your point of view) was when the tire blew out on the highway after a gig.  We pulled into the nearest gas station, went to sleep and when we woke up, the mechanic wasn't showing up.  So we drove another mile to the next place with the wheel making a sound that just screamed expensive and got it fixed. 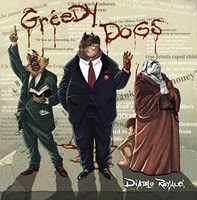 Attitude, sincerity and passion that comes through from the performance of every player.

It was "Casanova" in this band.  True to form, it was the riff first.  Actually, it had to be, we didn't have a singer yet.  Eric had the main riff and then he and Gman sat down and arranged it into a song.  Adrian wrote the lyrics as soon as he joined with Eric's help.  It's about the women that are teases.

Personally, Greedy Dogs.  I love the lyrical message, the performance and the attitude.  I love playing that song live.

Right now I'm really into Avenged Sevenfold.  I know it's not the first band you'd think we'd mention, but I love what they are doing.  It's in your face and they aren't afraid to do their own thing.  There is no pop formula there.

Vinyl sounds so unique and rich so it's great.  But obviously most new music doesn't come out that way.  So digital.  You can't beat the portability and you don't have to worry about scratches.

Whiskey.  Frankly, I don't like beer.  And I've tried to find one I liked.  Really tried.  Mainstream stuff, import, microbrews, I've even traveled to England and tried to get into warm beer.  No dice, it all tastes like what I'd imagine piss tastes like, except in England where it's piss they didn't bother to put on ice.  Jack Daniels on the other hand never fails to deliver.

We're in New York city.  Sadly, there really aren't any record stores left big enough to turn around in, let alone get lost.  It would have been Virgin on Union Square.