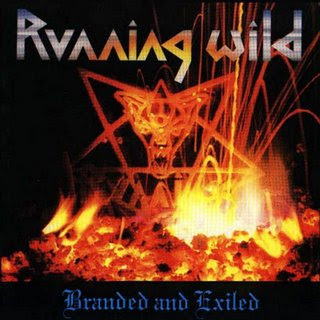 During one of our recent phone conversations, Racer made mention that he played Armored Saint’s Delirious Nomad and was pleasantly surprised that I didn’t steer him wrong with said recommendation. As the conversation progressed, he asked me about Running Wild and all the jolly pirate shenanigans that were encapsulated within their swarthy and swaggering tunes, to which I had to plead the fifth . . . for, I hadn’t spent much time aboard that musical sailing vessel bearing plundered goods from across the Seven Seas. However, I was aware of Running Wild just prior to them embarking on this journey through the ruffled shirt realms of metaldom. So, with the little reminder from my writing mate, I practically fell over myself to dig Branded and Exiled out of my collection for a long deserved spinning.
Running Wild through Branded and Exiled was a power metal/thrash group from Germany that played a darker version of Accept-styled metal or Destruction. This album came along just before Metallica, Slayer, Anthrax, et al made thrash metal the popular movement that it became. Once again, we have a fringe band that really didn’t achieve any success away from the underground during that pivotal mid to late 80’s time period. The production on this album is great in that the recording captured sounds raw and aggressive, maybe on par with the early Venom recordings. The mix is a little crazy . . . the guitars are way up front, the drums sound huge and the echo is turned heavily to the right, and the vocals have been baked in a casserole of reverb and garnished with distortion, which gives them a heavier, more menacing tone to them. It’s like Running Wild was flirting with the demonic spectrum of heavy metal, kinda’ like they were peering into the abyss of early death metal, intrigued long enough to put their thoughts to tape, and then ran away screaming in the opposite direction. It was all of these great little elements that made Branded and Exiled one of my cherished childhood memories.
Branded and Exiled opens with a monstrous guitar riff akin to Judas Priest and then with the sound of a gong, the whole band drops in and rolls into a classic anthemic metal, quasi-thrash, headbanging beast. The speed of the tune is mid tempo by today’s standards, but back in the day, this had an immediacy to it that definitely got the listeners attention. The little double bass drum flourishes are nice pieces of added texture, and the heaviness of the guitars, the palm muted chug-a-lug of power chords, creates a welcome sense of brutality to an otherwise potentially cheesy riff. The lyrics are all about the hordes of metalheads banded together, unified by their cause and alienated from society’s norms. Yeah, the kind of lyrics that the teenage kids at that time ate up like those special brownies passed around that one dude’s party.
“Realm of Shades” is actually a proto-thrash tune that stands up remarkably well twenty five years later. Remember, in 1985, thrash hadn’t quite become what it would, and the power chord was the most powerful chord of them all. Running Wild captured a great sense of dark and dastardly emotion on this one. As the song opens, that guitar riff is accented nicely by the cymbal crashes and short burst of distorted guitars. The song has a good flow to it, from verse to bridge to chorus and back again, the band did a great job of keeping the song moving. It has that terrific emotional build up in the music and the tension breaks at the perfect moments, getting a physical reaction from the listener to start rocking out with flailed arms and upraised knees. It has a mosh-able quality to it though there is no drastic tempo shift or disconnected riff to power the song in that way.

The second side of the album gets really anthemic with songs like “Fight the Oppression” and “Chains & Leather.” The former is straight up speed metal made popular by Motorhead. In fact, listen real close and you’ll hear the influence of “Ace of Spades” littered throughout this track. The speed of the tempo, for certain, harkens back to the godfathers, but the guitar riff sounds like it came from the hands of Fast Eddie himself. Despite these similar characteristics, the song has a great palm muted, hyper picked break before dropping into the guitar solo, and the guitar harmonies with the double bass flourishes coming out of the solo are an excellent NWOBHM touch. Throw in the high pitched vocal screams and you’ve got a heavy metal classic!
“Evil Spirit” is a slow, chugging, doom laden beast that may have been an early catalyst to Running Wild becoming the champions of buccaneers young and old. The riff has that early metal galloping quality, and oddly enough, it sounds detuned to embrace the darker, heavier tones and the guitar solo isn’t flashy or all that technically brilliant, but the tones and string bends are tasteful and make the piece shine. The lyrics have something to do with a gnome riding a sailing ship or something, though the subject matter may be lost in translation. In all the song is freaking awesome!
The final track, “Chains & Leather” is . . . really silly, but I can’t help but love this track! Running Wild is just singing the praises of metal garb and there’s nothing wrong with that. Good for them! The blue ribbon winning line from this track is, “Even Satan wears leather, our souls to it forever!”  C’mon! How good is that!?!?!?! The song is a pretty steady mid-tempo number and doesn’t deviate its pace . . . it just cruises along as the ode to all metalheads around the world. Chains and leather forever, indeed!
After Branded and Exiled, Running Wild simply got too campy for me, not that all of the music was bad . . . I just wasn’t interested in hearing about pirates buried booty in my metal. Branded and Exiled was one of those albums that I stumbled on and picked up without ever hearing a note, a completely blind purchase, and remarkably, the album has remained in my collection for all of this time. I like this album because of its darkened qualities and overall unpolished and rough sound . . . any cleaner sounding and there’s no way that it could be taken serious, any rougher and it becomes unlistenable. I would never call this a perfect album, but it’s a good example of the fringe, proto-thrash underground that was clamoring for fresh ears to assail. Now, I gotta’ dig through my collection and see what other mid-80’s gems are lingering around here . . .
Pope

There's nothing silly about chains & leather. You're silly!

Ha! I had this cassette! Pretty sure I still do...