Fitz and The Tantrums- Pickin' Up The Pieces 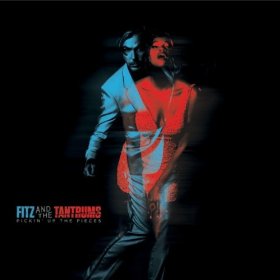 Led by Fitz on lead vocals, accompanied by co-vocalist Noelle Scaggs, drummer John Wicks, James King on saxophone and flute, bassist Ethan Phillips and keyboardist Jeremy Ruzumna, the 1960s music scene comes alive once again with their irresistible songs and their elegant attire. Looking at them and hearing their sound you could easily mistake the year and think it’s 1965. They sound like early 1960s radio and Motown.

Their vintage sound is immensely invigorating and that’s largely due in part to King’s saxophone defining their soulful sound accompanying Fitz and Scaggs’ vocals. Fused with tons of energy, listeners will be mesmerized by the pop songs and start dancing away on the dance floor. Good pop songs should make you want to get up and dance. Fitz and the Tantrums’ music is distinct.

The chemistry between Fitz and Scaggs is like that of Tina and Ike Turner. They got each other’s back musically; they complement one another on vocals and it shows. Their love and affection transcends the music into delivering mesmerizing musical performances and one hell of an album.

Fitz sounds like Neil Diamond and Daryl Hall (from Hall & Oates) creating a timeless sound for this brilliant band. Pickin’ Up The Pieces is an amazing album filled with ten tenacious tracks that will lighten up your day. It starts off with heavy keyboarding and tambourine on “Breakin’ The Chains of Love.” It’s like Ray Manzarek is playing the keys in a sweet sounding R & B song with Neil Diamond singing lead vocals and Tina Turner on backing vocals.

Following up, “Mr. President” is a political, piano heavy song that is a call to action you want to clap along with. The Temptations never seemed so good…I mean Fitz and the Tantrums are awesome on “Pickin’ Up The Pieces.” Literally, if the band was transported back in time they would fit in perfectly. Some individuals have described their sound as cliché, but their heart and soul is poured out in a wide variety of emotions. They are the epitome of what is meant by a band having soul.

Everything might appear formulaic, but everything from the hooks, the lyrics, and energy are genuine. Thanks in large part to Fitz and Scaggs’ chemistry. This is abundantly obvious on songs like “Pickin’ Up The Pieces” and “Money Grabber.” The heartbreak of gold diggers and directness of some songs is sheer brilliance.

An organ intro isn’t supposed to be moving, but somehow it works with “L.O.V.” The groovy sound makes the listener embark and be engaged with this funky, fresh “love” song. This powerful, passionate pop song has a catchy chorus that you can’t resist clapping along with the entire time.

Nothing is more malicious than “Don’t Gotta Work It Out” and is great way to handle a breakup from the male perspective. The album concludes with “Tighter” and to be perfectly honest I thought it was Elton John singing the entire time. It wasn’t until I double checked my iTunes that I realized it was still Fitz and the Tantrums. All the singles feel like classics and are full of compassion. It’s a testament that this group is destined for great things. The Silver-Lake based sextet is even more majestic live than the album and worth checking out if you have the chance.

Buy here: Pickin' Up The Pieces